When I left my husband in 1971, I also left my job producing his radio talk show. I had two suitcases of clothes, temporary residence in a friend's extra bedroom and was an emotional wreck. Unlike my parents, I had always said, I would never divorce.

Now I'd started the ball rolling in that direction and felt disconnected, unattached, with nowhere to belong. No home, no job, no money and no sense of what the next day would bring, let alone the rest of my life. Like many women of my age and in that era, when things went wrong with a man, I wallowed in my misery listening Carole King's Tapestry album - in retrospect, not one of the better ideas I ever had.

The one smart thing I did was give myself time to become accustomed to my new state of being. I went where whim directed me each day and one of those was to spend some afternoons with my friend, Sali Ariel.

She probably doesn't know it (and I doubt I've ever said thank you), but those days with Sali and her then-husband, Terry, helped ground me through one of the top two or three roughest periods of my life.

It's not that we did anything special: we talked, listened to music, Bob Dylan came by for his Hebrew lessons with Terry and to play backgammon. These good people just let me be for a few weeks while time worked its magic until I returned to something resembling normal.

One of the things about old friends is that you don't have to explain yourself. They were there with you for the good and the bad which gives them an understanding of you that new friends – welcome as they are – cannot know.

And one of the things about keeping a blog is that you can write about anything or anyone you want. Today it is Sali.

Sali reminded me in a recent email that we met probably in 1969 when all of the disparate “movements” of the day were held together by their common objection to the Nixon administration and the Vietnam War. I booked a lot of those people on my husband's radio show – Abby Hoffman, Jerry Rubin, Paul Krassner, Sali's husband Terry, even “Dylanologist” A. J. Weberman. And without my noticing it as it happened, in all our hanging out together with these mutual friends and acquaintances, Sali became my friend.

Not much later, Sali and Terry moved to Israel. No internet in those days, but we kept in touch by letter and Sali sometimes stayed with me when she visited New York. What was happening in her life, in addition to her own divorce, was her emergence as a remarkable and respected artist.

One of my visits with her in Israel coincided with a show of a series of her large paintings of nudes. Besides being beautiful, they were gigantic, but Sali gave me a set of miniature prints she'd had made which are now grouped on a wall across from my bed so they are the first thing I see when I wake; Sali comes to mind pretty much every morning of my life. 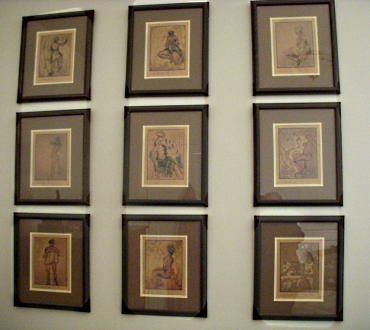 Here is a closeup of the middle painting which is my favorite - or maybe not. I like them all. 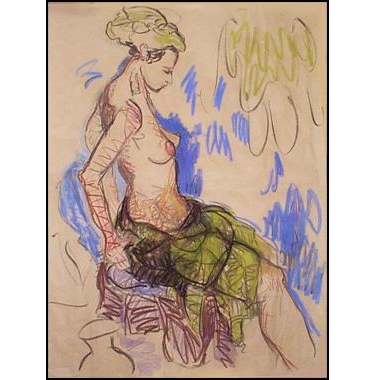 Three weeks ago, Sali sent an invitation to the opening of her new show of paintings celebrating the one hundredth anniversary of Tel Aviv's founding. It is times like this I lament I don't have the kind of money that allows me to jump on an airplane to be there with an old friend when something special happens. About the paintings, she told an Israeli blogger:

“I started seeing the Ramat Gan business district going up and all the big tall buildings on Rothschild Boulevard and while I don’t think that’s bad, I was afraid we would forget how Tel Aviv looked. I also felt inevitably, Tel Aviv had to change, but I didn’t know if it was for better or for worse. I wanted to document it for people in the future so they would know how Tel Aviv was in our time.”

Sali has been painting Tel Aviv for several years and what I love about them is they perfectly capture the feel and memory I have of the city from my visits. Here are a few: 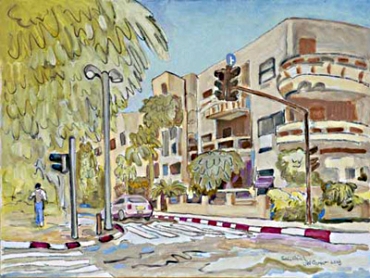 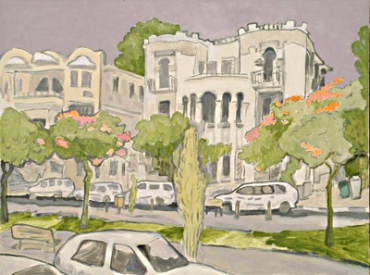 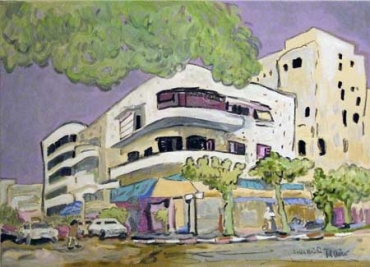 I forwarded the invitation for the show opening to Tamar Orvel who blogs at Only Connect and lives in Tel Aviv for half the year. She had to be out of town that day, but said she would visit the show when she returns which, if memory serves, is about now.

If anyone reading this happens to live in Tel Aviv or knows someone who does, it would be nice if you let them know about Sali's show. It is at the Rosen Center Gallery through 22 April. And if you see Sali, give her a hug for me.

You can see paintings from Sali's earlier shows at her website.

God I wish I could just stop by Sali's place and hang out again for an afternoon.

[At The Elder Storytelling Place today, Norm Jenson recounts a tale of chess and automobiles in Catching Zs.]

Her work is wonderful, and while I have never been to Tel Aviv, Mr. kenju has, and his photos are similar to her paintings. I'm sorry you can't go to her opening, Ronni.

Tell her I like the use of the olive green with the bright blue!

No wonder you've kept your friends, Ronni - you're such a good friend to them.

Your post today reminds me of what I miss the most about my youth: hanging out with friends, not doing much of anything, but able to be physically there for each other on a day-to-day basis.

It sounds like a great show and wonderful idea to preserve something the only way it can be sometimes. Her paintings are beautiful.

"wish I could hang out" ... You just did, Ronni, sort of. And we were all there with you. I loved the paintings very much, every one of them, but I loved the tribute to women overcoming challenge even more. Thanks.

My wife and I have been to many parts of Israel including Tel Aviv. For those who don't know Hebrew,"Tel Aviv" means hill of Spring and "Israel"
means either contender with God or wrestler with God. I found Sali Ariel's paintings beautiful. I wish that we, my wife Sheila and I, could afford to see them in person. I am a bit of an artist myself. I use tempera water colors, and my favorite subjects are light houses, although I do paint and sketch some religious scenes. I think that I may appreciate Sali Ariel's work a bit more than a few people I know who "can't draw a straight line with a ruler", but her art should be appreciated by all!

Thanks so much, as one person already said, you are really a good friend, I so wish we could hang out together, but this is sort of the same, love, Sali

I wish you could TOO, Ronni. Wonderful story. Beautiful pictures. I'll just keep sayin' it... you should write a book.

Thank you for these.......and sharing the friendship. I had so enjoyed following your life and career in your sidebar, this just adds a little richness to those tales.

What a wonderful tribute to friendship and specifically to yours with Sali! I enjoyed reading this so much and love her paintings!

I love Sali's work and your nostagic recollection of an era I fondly recall. I hope an angel arrives with your plane fare to Israel, pronto.

Perhaps this is too callous for you, but if you have a PayPal account, you might place a button on this website (unless there's a constraint in the service contract with your provider, I suppose)for contributions to the Send Ronni to Israel Fund. I cannot spare much, but I will surely click on that button.

Ronni - what a wonderful person you must be to engender so many lovely friends. Sali's pictures are beautiful- Yafeh Me Od. In 1983, Syd and I went to Israel for our 20th wedding ann. and had the most awesome experience. I have been teaching Hebrew for more than 50 years and the feeling of coming home just permeated the entire trip. I literally stopped people in the street - just to speak Hebrew with them...it drove Syd crazy. I too wish I had the moolah and energy to travel there again...maybe in the next life - God will punch my ticket for a direct flight....of fancy.

Enjoyed the art work very much...Thanks for putting them online...

I love your friend's paintings, especially the scences from Tel Aviv. I lived there from 1974-1975, and have never been back. One of these days. Great piece and wonderful writing.

Thanks for this added insight to a period I remember fondly...including Tapestry... and to my new friend Sali, whose recent artworks I have seen and appreciated... and thanks for the reminder to visit the exhibition... next time I visit my daughter who lives around the corner from some of these scenes...