Sabine Mattern is a college student in Germany working on her thesis about baby boomers and the perception of aging in marketing. She emailed recently asking if I would post a survey she that would help with her work. It is aimed at the boomer generation (born between 1946 and 1964). Here's the survey.

Mazel Tov to President Obama. On Thursday evening, he hosted the first-ever Seder for Passover in the White House. A rabbi who was not scheduled to attend said, “"I'm only sorry that I won't be there to see the president and his chief of staff Rahm Emanuel say at the same time, 'Once we were all slaves. Now we are all free.'" More here. 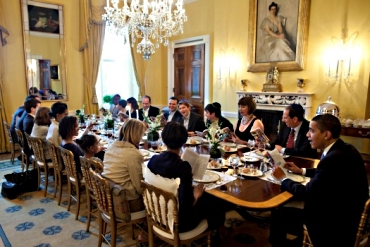 In an op-ed piece this morning in the Wall Street Journal, Peggy Noonan, who is a former speech writer for President George H.W. Bush, compares and contrasts the behavior of Wall Street denizens during the greed years of Bush I's ignoble son to the cooperation of their counterparts in the days following the attack on the World Trade Center in 2001.

"So maybe wisdom begins there for them, and for those entering and living out lives in business in America: Look only to yourself and wind up with ashes. Know it's bigger than you and wind up a hero."

It's an insightful story. Read the whole thing here.

Here's a cheerful view of aging from Steve who blogs at Projections who also posted this interesting quotation from the late physicst, Richard Feynman.

“There are 10^11 stars in the galaxy. That used to be a huge number. But it's only a hundred billion. It's less than the national deficit! We used to call them astronomical numbers. Now we should call them economical numbers.”

Imagine what Feynman would say about bailout monies if he were still alive.

Once upon a time if you lost a camera, it stayed lost. But this story explains how a bunch of people working together online managed to the find the owner even though there was no identification on the camera. The detective work is amazing. More here.

Soon, I may be the last person left in the U.S. without a facelift. Some years ago I railed against a job counselor who suggested plastic surgery for older job applicants. Now, apparently, no one needs to be advised; they do it on their own. This time the excuse is to remain competitive in the job market during a recession. But it's really about the culture's refusal to accept aging as normal. More here.

Naomi Dagen Bloom of A Little Red Hen posted photos recently of a white peacock. Amazing! Particularly the one juxtaposed with a little white dog.

When the recall of pistachio nuts was made last week due to salmonella contamination, the bag I'd recently bought was from the same California processor. Since I'd already eaten half the bag without falling ill, I kept it. But food safety is a growing problem. Here is a sane story about the fear headlines that have been circulating saying backyard gardens and farmers markets will become illegal if a certain Congressional bill passes. It's worth your time.

Here's your feel-good animal story for the week: a cat found alive after five weeks buried in the rubble of collapsed building in Cologne, Germany.

In a story last week about how everyday people are coping with the recession, CNN broadcast this repellent report on how an 84-year-old waitress is “...still waiting tables, but she's doing it to supplement her Social Security income. The most important thing here is that she has no mortgage...”

Wh-a-a-t? An 84-year-old on her feet all day working for tips in an economy where everyone has cut back on eating out is good news? See for yourself:

UPDATE: I just discovered that Crooks and Liars and Jason Linkins at Huffington Post picked up on this too.

Slim white haired Hazel who is either 88 or 89 years old now has worked at a local meat market for as long as I can remember, and I've shopped at that market almost 40 years. She walks to work five days a week, and puts in her normal 40 hours.
She had not missed one day of work until the day she tripped over a dog toy. Bruised and bandaged she appeared as usual for work the next day.
Hazel, who does not like dogs, could not refuse her disabled son's request for a puppy. Her son, though unable to walk has fulfilled his promise to take care of the dog...and he is so happy that Hazel's mother love endures the commotion.
Hazel worked behind the meat counter for years. Now-a-days she keeps the windows in the freezer and dairy section clean and clear, and chats with customers who hold her in high esteem, as do all her fellow workers and owners of the market.

I can't help but wonder why Mildred is working if she doesn't have a mortgage. I know California is one of the most expensive places to live, but I think she could live comfortably on her S. S. since she has worked so many years her check should be of a sufficient amount to pay other bills.

I don't draw the full amount of S.S. due to getting a percentage of my husband's rate and having to take an early retirement at 62. Yet I live quite well on S.S. alone without supplements. I couldn't do that if I had a mortgage.

I will be 84 next month and there is no way (even before breaking my hip) I could stand on my feet and wait tables. Mildred must be blessed with good genes.

That White Peacock is beautiful.

I wish I could figure out a way to get SNL or the Daily Show to do a parody on that [in]Human[e]Interest" bit. I wonder if that would put an end to the popular thought that an 84 year old woman is "lucky" because she has a waitress job and a paid mortgage. What a waste of Mildred's talent and spirit. How about a story where Ali Velshi pawns his Rolodex so Mildred can have a few well deserved weeks off her feet? That video is simply sad and I am reminded why I don't watch network television.

You aren't the last person to not get a facelift! I believe in being yourself whatever that may be at what ever age. I earned every grey hair and every wrinkle whether they were brought on by stress or happiness. I plan to keep every one and show them off to their best advantage no matter what!

Now if Mildred would get a face lift...

Seriously, the news piece missed the point entirely. Why would an 84 year old woman have to work? It's a shame that her owning her home doesn't mitigate. How many Mildreds and Miltons are out there working in their 70's and 80's because they have to, rather than because they choose to? That would have been a much better news piece!

When I see a white peacock, I am reminded of the beautiful work by Charles Griffes for flute and orchestra by the same name. Anybody heard it?