On Monday afternoon, the weather service warned of an overnight frost and that delicate plants could die if not protected.

Damn. I had just moved the early season's plantings outdoors that morning. So I dragged them all inside - I haven't spent the past two months preparing what I am now referring to as the “deck farm” to lose everything to Maine's delayed spring.

It began in mid-March when I obtained this mini-greenhouse and sowed the seeds of what I intend to be summer's bounty. If you look closely, you can see the first few sprouts in the lower left only a week after I planted them. 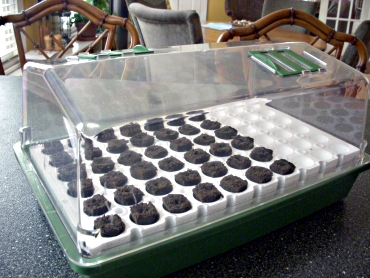 Yesterday dawned bright, sunny and cool although, in contrast to Monday, an 85-degree day was forecast. The pink tree across the street glowed in the early morning light. 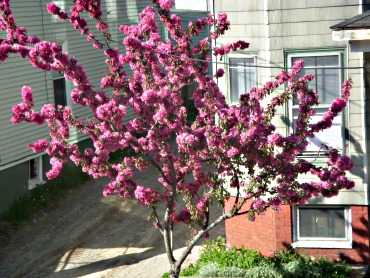 It is high season for lilacs in Portland, Maine so I picked up a big bunch at the farmers' market on Wednesday to brighten the dining table. 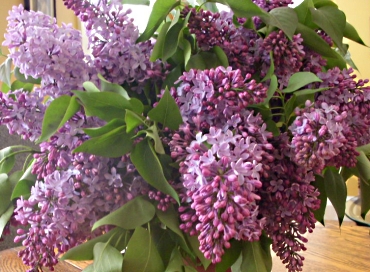 And I couldn't resist these long-stemmed narcissus. (Well, I think they aren't narcissus, but close enough.) It's an indulgence to spend money on cut flowers in these tough economic times, but I miss having them in the house year 'round.

In New York, unlike Portland, there are flower stalls on nearly every corner and I factored the weekly expense into my budget when I lived there because having fresh flowers in the house makes me happy.

But back to the deck farm. Making a leap of faith that Monday night had been the last frost, Farmer Ronni again dragged all the plantings out to the deck on Tuesday. And look at this: it won't be long until I'm picking my own lettuce for dinner. 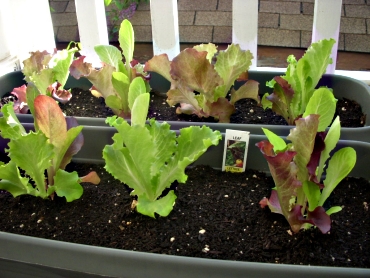 The peppers, which I grew from seed are doing well. 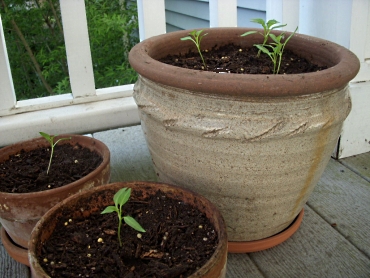 For several years, photos of strawberries growing in bags like these have intrigued me, so I am trying it this year. They are already off to a good start.

Although it is only about half its original size, the blueberry bush survived the squirrel attack and he (or she) hasn't been seen since. 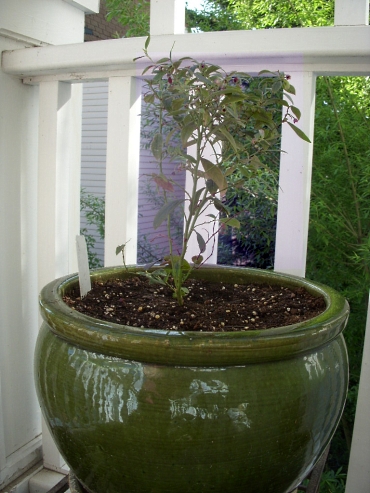 There appears to be a bumper crop of the long-tailed, furry little buggers this year - they are everywhere - and I'm hoping they don't like onions. There will be plenty of scallions for salads and stir-fries before long. 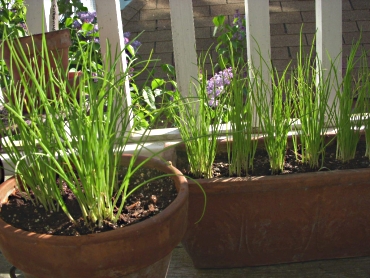 Did you notice the neighbor's lilac blooms peeking out between the scallions on the other side of the fence? I'd have saved my money at the farmer's market if I could have cut some, but they are just out of reach and it would ruin the summer if I fell off the deck and broke an arm or a leg. 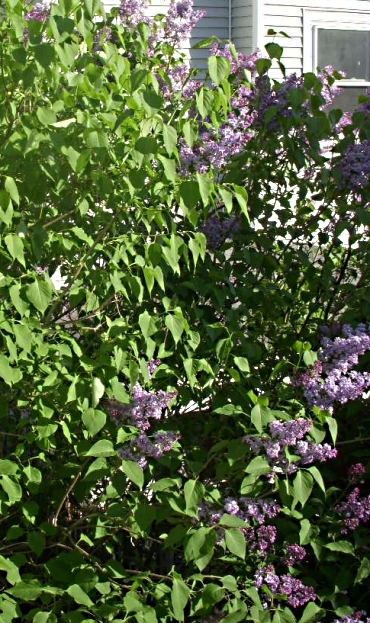 What's in your garden this summer season?

At The Elder Storytelling Place today, Lyn Burnstine: The Hike

Here in southcentral Kansas, I've been eating calintro and (little green) onions, sweet basil, and a small amount of asparagus from my garden for 3 or 4 weeks, and strawberries for the last week. The hard freeze in early April killed one peach tree and all of the budding blossoms on the other peach and two pear trees. The cherry tree should have another bumper crop, though.

In the ground for future use: several herbs (dill, fennel, marjoram, boxwood basil), 3 kinds of tomatoes, 2 kinds of peppers, and 3 kinds of greens (mostly chards). Oh, I nearly forgot to mention the bountiful crop of crab grass!

Your plantings are beautiful!

We have 3 different colors of lilacs in back along with light and dark pink honeysuckle. That corner of the yard is beautiful. We're eating rhubarb, onions and radishes, with lettuce almost big enough to enjoy and spinach close behind. This weekend we will plant a number of heirloom tomatoes, cucumbers, squash and, if I can sneak a plant in, eggplant. We'll also have peppers. Our garden is larger than yours, but small for what we want to grow. We enjoy sharing the extras.

I am fascinated with your strawberries in a bag.

We planted strawberries in the ground a few years ago and they have taken over the whole side yard of a little cottage we have...They are everywhere!

Please keep us posted on the ones you are growing in the bag.It will be interesting to see how well they grow contained like that.

It's a great idea.

It's great to see how your deck farm is coming along.

I've got a 15' X 25' vegetable plot that my sister and I do together. The snap peas are about six inches high, and I thinned the lettuces last weekend - a mesclun mix, arugula, and something else - butterball? - so we had fresh green salad, one of life's great treats.

I'm losing my magnolia tree, though. I'll be visiting the nursery to see what happened to it.

Alas, at our condo I can only accommodate 2 heirloom tomato plants & a container garden of flowers. On second thought, I think that will be just fine for us. We are very fortunate to have several farm markets nearby & next year there will be a community garden here after the last homes go up. Really looking forward to that.......fresh salad, yum! Dee

Great photos, Ronni. Thanks for sharing them. Now if you'll just figure out a way to ship us (all) a couple of strawberries... :)

My tomatoes are frostbitten and hail damaged, so I'm not showing them off. But the snow peas are looking good.

I can sympathize. I finally removed the plastic on my 'cold frames' this week as the temps rose over 80. We aren't expecting anything lower that the mid 50s at night so I think I will be safe. Tomatoes, peppers, and lettuce doing well.

Here the garden has been in since February, and I've been having salads, chard, turnip greens and parsley for a few weeks now. In August, I will wish I could move to Michigan, as I do every year.

I will be interested in finding out if you get any blueberries as I had heard that you needed two different varieties of blueberries in order to get a crop. I planted two plants years ago. The first year nothing, the second year one plant died, third year a total of 4 blueberries. Last year my friend gave me another plant that I planted next to the original one and clearly my original plant had been lonely because it produced two handfuls last year and this year the plant is covered with blueberry blossoms!

It's midsummer here in the heartland (aka Austin,TX). Temperatures in the 90's in the afternoons and since we were blessed with some rain early in the spring my garden patches are blooming like the Amazon. Ate a few lovely home-grown (yellow) tomatoes last weekend and the Japanese eggplant has already produced some nice-sized fruit. First planting of mesclun has run it's course and second planting with arugula, baby romaine etc. get's picked every evening for dinner salad. All-in-all we've got the makings of a good summer garden-wise. I'll be planting okra next week - it's the only thing that will grow in July & August.

"Hyacinths to Feed the Soul

If thou of fortune be bereft,
And in thy store there be but left,
Two loaves, sell one, and with the dole,
Buy Hyacinths to feed thy soul"
~
Muslih-uddin Sadi

I envy all you master gardeners. My pots contain succulents and cacti and they would probably taste terrible.

Keep us posted on the strawberry bags please, so interesting. I'm planting flowers in with my salad garden this year. Flowers do make us feel good. Just cosmos, nasties, and some daisies but they'll look nice. And you can eat nasturtiums on your salads.

I live in Minnesota and we have reluctant springs too. I put out my three cherry tomatoes and two peppers and the next night I hauled them into the garage to protect them from frost. Fortunately the onion sets are underground. This is the first time I have tried growing onions as we have a relatively short growing season like you. I have since planted my "Early Girl" and all is growing by leaps and bounds. I can hardly wait. I have heard of growing tomatoes in the bags so will be interested in your results.

Hurrah! Love this container gardening. My friend(where I live) and I are now able to pick the salad greens and an assortment of herbs. The tomatoes need something for support as they are full of yellow flowers. Gardening brings forth food for the mind, body and spirit.

Isn't it fantastic what you can grow on your deck. A great design for growing strawberries and, like many other posters, I'll be interested to see how they do.

Our summer salad veg is well on its way, the potatoes are ready to be lifted and today we picked our first peaches....juicy and sweet. Plums and apricots ready in about two weeks.

Neat!! I really hope you'll post again with a progress report on the food you're growing!