Claude of Blogging in Paris alerted me to the work of her Flickr friend, 86-year-old artist, Norma McGuire (also known as Nonie Vogue) whose work ranges from photography to quilting, painting and recently she branched out into sketching. Here are some samples and you can see more here, here and here, plus Claude's birthday tribute to Norma. 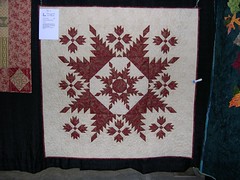 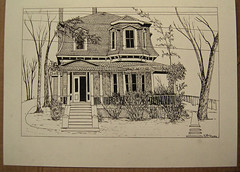 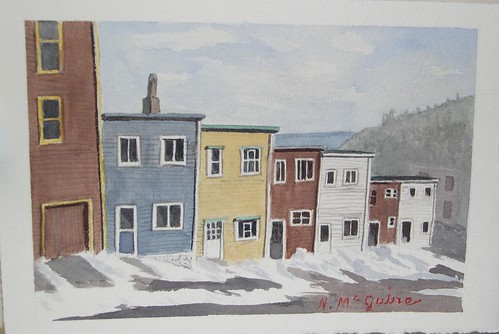 Joan Didion's book about the year following her husband's death has been around for awhile now, but it's good to see a review from an elder's perspective. It's amba of ambivablog's 85-year-old mother, Jean Gottlieb. You can read it at amba's blog.

On Wednesday, I wrote again about Dr. Bill Thomas, Green Houses and his latest video campaigning to appear on The Oprah Winfrey Show. In that video, Dr. Thomas asked viewers to make their own videos or write stories about the experiences with growing old. Darlene of Darlene's Hodgepodge followed through.

“My days are full of the simple pleasures,” she writes. “I am grateful for the parts that still work. I can read, watch programs that I enjoy, write and call friends, or simply do nothing. The choice is mine and mine alone.”

Read more of her beautiful and honest post here.

After a disgusting story like this one, there can be no doubt that we need more of Dr. Thomas's Green Houses than ever before. The New Jersey Department of Public Advocate reports that an assisted living company that operates eight facilities in their state threw out aging residents after having lied to them about being able to remain when their savings were depleted and they converted to Medicare.

“...the company, Wisconsin-based Assisted Living Concepts, instituted a policy of involuntarily discharging elderly residents once they had spent-down all of their life savings, leaving them essentially destitute, said Chen.”

Much ado is made about how much more dangerous childhood is these days that when we were kids. I don't believe it nor does Robin Hemley who recounts some of his childhood adventures:

"I built a bomb when I was nine. I rooted around under the sink and poured every chemical I could find (this was the 1960s, chemicals were never in short supply) and poured them into a Windex bottle and made a fuse out of a shoelace. Then I went outside and placed the bottle in a field full of dry brush.

"I didn't think it would work. It did. I set the field on fire, but luckily I was able to stamp it out before it spread and burned down the neighborhood. My sneakers melted."

More of his fright-producing adventures are here.

According to a new blog about funerals, the ancient Greeks hired professional mourners.

“...hired mourning continued; through the Middle Ages and the Age of Enlightenment it was practiced in Ireland, Egypt, Spain, Italy, Romania, and China. And then, sometime in the last century, for the most part, it stopped,” writes Justin Nobel.

There is at lot more information on the ways and means of sending the dear departed off into the great unknown at funeralwise.com.

This story from the BBC is about research that appears to show working past retirement age may ward off Alzheimer's Disease. There have been a lot of such news items in the past year and I'm just cynical enough to notice that they have turned up in force following the wipeout of retirees' savings in the economic collapse giving many elders no choice but to return to the workforce.

Last summer, I went on a rant about the oxymoron of fashion for elder bodies. Now at least one other person has taken up this cudgel against fashion designers who have an extreme preference for 20-year-old bodies. This graph from the story shows the change in spending on clothing by women between March 2008 and March 2009.

Like me, you have undoubtedly noticed over the years that photographs accompanying obituary notices in newspapers invariably show the newly deceased at a much younger age. A recent study of one Ohio newspaper over a period of 30 years revealed an increase of 17 percent in “age-inappropriate” obit photos.

"Families may want to show pictures or tell stories of their deceased family member at his or her peak," [said one of the researchers]. "We have a lot of pictures of young age, but how about pictures of old age? We might want to think about this related to ageism in society."

My Australian friend, Peter Tibbles, sent along this amazing story of a 94-year-old Japanese man who survived the nuclear bombings at BOTH Hiroshima and Nagasaki. You can read it here and listen to the interview.

Thanks for this, Ronni. Norma is really such a wonderful person and so creative!

Went to cruise a mall with my 46 year old sister-in-law. City mall stores lean heavily/cater toward teens, with clothing wayyy unsuitable for anyone over 25.

The feel of cheap fabric turned us off. Too much polyester/plastic, and not enough cotton content.

I'm allergic to cheap clothing- that's why I often buy my t-shirts and casual clothes at Village Valleur, a great second hand store.

Thirty percent off on Tuesdays!

Smarten up, designers, and give seniors something classy and good quality to wear.

Designers, you are foolishly avoiding the very people who have $$$ to blow on goods of all types.

What's the matter with you? Can't you read demographics?

Listen up, designers. I avoid your shiny crappy clothes like my cat runs from water.

While I'm on this rant, lets talk shoes. Who wears those over priced, ugly ass spike heel shoes that dominate most footwear stores?

Say, would I get more gardening jobs if I showed up in silver spikes, skinny, belly jeans and a gold lame boob bearing tank top?

Or maybe Daisy Duke shorts and no top?

Even the skunks would come out.

"Hey, come over here...we gots some fine perfume for you..."

Who wears 5 inch spike heels anyway? Hookers, maybe? Their only possible use I can think of, is filling them with earth and planting herbs.

Designers, I'm sending you to your rooms, like my dad did when he ordered me to learn my times tables, or no more tv.

Don't show your Botoxed faces until you've designed something seniors will buy and wear.

I was alerted to your Blog by my dear friend, Claude. What a surprise and a delight! I have been told recently, by the pastor here, and also by the Manager of this Independent living complex that those who keep active, like me, age well. I do hope that is true!

Thank you for your kind blog about me. It is very much appreciated. I even told my son to take a look!

I'm snickering at the picture in my head of the huckster selling trips into the future of an alternate universe so that the family may publish the photo of the deceased "...as she would have looked had she lived to be 113."

In their May 11th edition, Newsweek brought out their last old formatted edition. One of my favorite writers, Anna Quindlin, writes a closing page on journalism, adaptation, and reformatting herself into a new life. This is truly the end of something major as all print newsmedia reformat themselves for the future.

Lots to chew on here today Ronni. I wonder if people even have pictures of their aging relatives after a certain age. I had to ask someone to take one of me for my blog. Did get a nice foursome taken with my sisters a couple of years ago. I am sorely tempted to find a flowered housecoat at Goodwill and put my hair in curlers, and pose with my bunny slippers and a beer for my final photo. My kids would like it too.

The new reformatted Newsweek is a handsome publication. I love the feel, the"heft" of it and the way the articles are presented is very well done. Evidently there are those who prefer the old cheap, flimsy paper and the helter-skelter organization of the previous edition but "it ain't me babe"

I find it so disheartening that the world has not banned all nuclear weaponry after the horror of Nagasaki and Hiroshima. I guess mankind won't learn until they destroy the earth and everything in it.

After the Cold War there was some hope, but now with North Korea, India an Pakistan having the bomb (where the crazies may get it) and with Iran continuing to develop one I am sick and discouraged.

Don't know what my relatives will do for an obit photo when I die. Seldom have any taken, so they'll probably dig out something weird-looking. I like that idea of Celia's; why not make up our own disguise! It couldn't look worse than our latest driver's license photo.

I agree that most of the women's clothing sold this year looks awful, which is why I haven't bought any. The blouses really do look like maternity tops. Designers are overlooking a very large market. No wonder we stick to jeans as much as possible.

More on the "clothes" thing. My gripe is not that they don't make clothes for us "seniors". They do, actually, and they're all hideous--lots of even cheaper fabric, pastels, elastic waists, and embroidered duckies and daisies. Yuch! But that's not the worst of it.

My problem is that they don't make wearable, stylish, confidence-inspiring clothes for any adult woman who wants to look...like they're ready for an adult role in life. In the "Jobs" section of today's NY Times in Career Couch, the following quotes say it all:

"Ms. Pachter (a business etiquette expert) said a human resources manager told her that she would not have hired anyone at a recent career fair because of how casually they were dressed...Be careful about revealing too much. Ms. Pachter said she had heard from some young women that 'they thought they had to dress sexy to get noticed in the work world.' They’ll be noticed, yes, but for the wrong reason. She said this view might stem in part from TV shows that portray professional women in low-cut, tight shirts and super-short skirts."

Dressing in these awful clothes doesn't work for us--but it's also not doing so well for attractive young girls in this economy, either.

How sad this all is 30 years AFTER the women's movement!