Guest Blogger Cowtown Pattie: He Was a Real Cowboy

While I am away in New York City for a couple of weeks, a fantastic group of elderbloggers and elderblog readers agreed to fill in for me. Today it is Cowtown Pattie who says she is a square-shooter, round-booter, attitude-totin' North Texas Woman. Raised four more jes' like me - almost. A babe of the 50s, a child of the 60s, a teen of the 70s, and a woman of the ages. Thrice married - yes, the last is a charm. I don't tolerate ignorance, nor rudeness, so mind your manners and we'll get along fine. She blogs at Texas Trifles.

As I step on board I’ll be leaving
All my sorrows and heartaches behind
I’ll be safe with Jesus the captain
Sailing out on the ole ship of Zion.

Late in the evening, when the bullfrogs begin their mesmerizing singsong lullabies to the sleepy waning sun, the Colorado River flows like liquid emeralds through the Texas hill country. During heavy spring rains, the Colorado becomes a roiling fierceness of wrathful anger; on a hot still summer day, its cool, shaded, mossy banks are heaven on earth.

My mother's family farmed the river delta area near San Saba; wind-swept little towns marked now by old, weed-choked cemeteries and sleeping dogs in the middle of the road. Standing on the Regency Bridge near Locker, I close my eyes and can almost hear a small Baptist congregation singing that ancient hymn Old Ship of Zion, waded full thigh-deep in the old river, their white cotton choir robes spreading out like giant water lily petals in the cold green water.

My great Uncle Vernon was baptized in the Colorado on a warm spring Texas day, as were many of his kin before him. I only know this because of a late cousin's memoirs. He was not a man to wear his religion on the outside. Introspective and quiet, Uncle Vernon was a real cowboy and a true country gentleman. 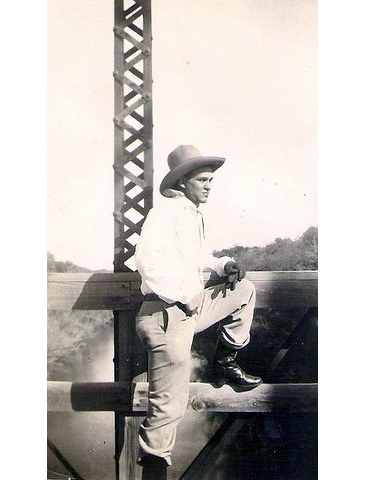 Taken on the Regency Bridge over the Colorado River on his younger brother's wedding day (my grandparents) ca 1930.

Never confuse the Hollywood version with the real deal. Texas cowboys work hard, daylight to dark, as the saying goes. No fancy-stitched shirts or intricately tooled leather saddles, a real cowboy is more likely to be wearing a shabby old Stetson with a permanently sweat-stained ring around the crown band and boots that have seen more stirrup than sidewalk.

He was born in 1907 near Hall Valley, Texas, to poor hard-dirt farming parents - people whose ancestral bloodlines just a couple of generations prior traced back to the Old Country, places like Hainaut, France and Zweibrucken, Germany. Come to the Promise Land of America, but the milk and honey didn't exactly flow.

Life on the sharecropper's farm was not easy, children died young and those that managed to hang on had days filled with grown-man labor by the time they were eight or nine. Then, the Great Depression came upon them and life became even tougher.

Uncle Vernon had a way with horses and livestock, and though his book-learning days were not stellar or long, he was more than compensated with his work ethic and common sense knowledge. Neighbors and town folk alike knew he could be counted on to help at a moment's call. Uncle Vernon was a gentle soul, one of the old breed of cowboy Texas is known for.

He liked the girls, could be quite the flirt, but for whatever reason, he didn't marry until he was 46 years old. Marie was an old maid spinster and at age 41, she wasn't likely to get a better offer. Never mind their ages. The two middle-aged sweethearts were inseparable and the absolute picture of devotion. In Vernon's eyes, Marie was the most gorgeous woman on earth, and you could physically see the love bouncing off the two of them.

Ranching was his profession, though Uncle Vernon never owned much more land than a few acres in his lifetime, if that. He and Aunt Marie settled near the little town of Placid and he worked for the Parker Pumphrey ranch. She ran the little store with a gas pump and was the town post mistress.

What's left of the old store: 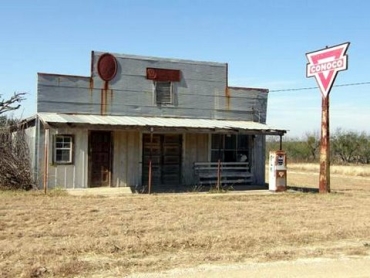 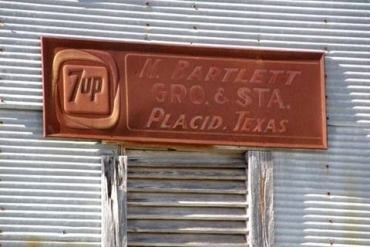 Aunt Marie died in 1982 of "the cancer" and the whole family thought Uncle Vernon would mourn himself to death, but life didn't change much for Vernon. Or if it did, he wasn't one to complain. He still got up before the sun debuted and ranched until his late 80s. A family member still has Uncle Vernon's favorite old working saddle hanging in her garage, a memento of a by-gone era. Sadly, his last year of life was spent in a nursing home, and thinking back, I wished there had been a better choice for the old cowboy. 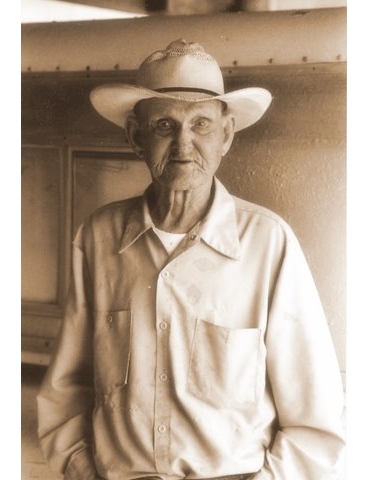 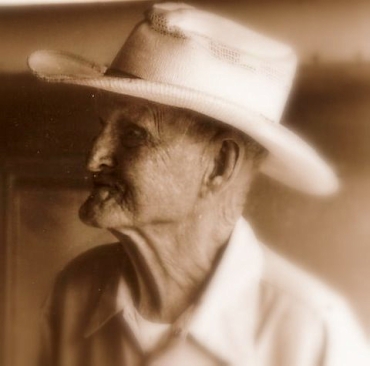 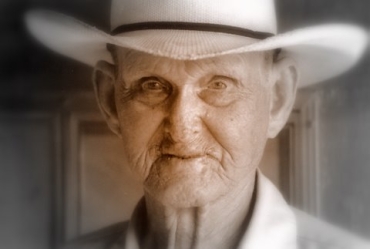 When he died on May 17th, 1996, Uncle Vernon's long-time friend and employer wrote to a nephew and his words from the heart sum up the man in a couple of touching paragraphs:

I felt sure the end was very near for Vernon and tried my best to prepare for this eventuality, but I suppose that's an impossible task to successfully carry out. While cleaning up at the ranch following the days subsequent to his funeral, I would catch myself about to say something to him. Or I would get up in the morning, look at where he used to park his white pick-up, and would start to mentally think: "Wonder where Vernon is; he's usually here by now." Well, I believe my actions to be as I should expect them to be as we spent a heck of a lot of time together for about 40 or so years, especially lately.

Vernon was very influential in my life. I have never met a more honest person. And his "jumping in and doing the task at hand" despite aches and pains was unexcelled.

Oh, I could go on and on about his top caliber personal and professional qualities, plus a lot of other most laudable attributes. But I need not do so as you well know what I would say. The mold was destroyed when he was made - there will certainly never be another like him - or even close. The rare people like him are what made our country great. I journeyed to his resting place last Friday to give him my final goodbye. I will always remember my friend on a frequent basis. I was so fortunate to have known this fine gentleman with the sterling character, other outstanding traits.

EDITORIAL NOTE: While I am away, The Elder Storytelling Place is on hiatus. You can read past stories here. And if you are inclined, you could send in stories for publication when I return. All elders, 50 and older, are welcome to submit stories for this blog. They can be fiction, non-fiction, poetry, memoir, etc. Instructions for submitting are here.

Your tribute to your uncle, "...not a man to wear his religion on the outside," raises up a unique soul, a descendant among the millions of immigrants, each unique, who came to this great country and built it as they built, rebuilt, and are rebuilding themselves. I, the east coast provincial, with roots in the capital cities and urban centers of Russia, Europe, and the Middle East, thrill to read of your Texas Hill country cowboy Uncle Vernon whose full-color portrait reminded me, again, that the Promised Land can be anywhere, and that the promises are often fewer and not what were anticipated. And sometimes they are much more.

Absolutely beautiful story. I became so calm reading it. Wanted to go see the store in the photo, and wish I could have been there to buy something. Maybe candy.

I love the photo on the bridge - he clearly knew he was a good looking man! The ones in his last years are great too - they show a life lived to the full.

Nice story. And a good look at a by-gone era of west Texas too.

We need more people like him. The word cowboy got badly misused by those selling the country Bush but your uncle is like the cowboys I know and have known. There are a lot of wantabes out there. They want the look though not the hard work that goes with it.

Ya'll make me both blush and smile this morning. I'm just glad I was given the opportunity (thank you, Ronni!) to introduce and share my love of this old Texas gent.

TGB friends are the best.

What a wonderful tribute to a true hero of the West!!!!!!

Such a poignant story of the middle aged sweethearts. I especially enjoyed reading the line "You could physically see the love bouncing off the two of them."

Thanks for giving this city girl a glimpse into the lives of a real cowboy and the love of his life.

Special people are never forgotten. I, too, am a city girl, and I thank you for sharing this real life story!

My mother, who rode her horse, like a the cowgirl she was, called the Hollywood and Bush 'wannabes' 'Drug store cowboys'. Your Uncle Vernon was the real McCoy and your love for him is palpable.

Lovely and beautifully balanced by the photos. Thank you.

You really brought your Uncle Vernon to life with great affection. Hope he received some of the tributes while he was living -- that he knew his life was loved and valued.