Happy Fourth of July, Everyone

[EDITORIAL NOTE: This Week in Elder News is taking off the holiday. It will return next Saturday. And, in a housekeeping announcement, due to a fire at a server farm in Seattle, I have been without email since Thursday evening. The outage continues, so if you have sent a note expecting an answer, I have no knowledge of it and so far, no estimate of when email service will be restored.]

For the past eight years, America's independence Day celebration has felt tarnished by the many assaults from the Bush administration on our Constitution. Now, however, even with our current difficulties – recession, greedy Wall Streeters, millions of foreclosures, unemployment, two continuing wars, a Congress as out of touch with its constituency as if they are on Mars, etc. - there is reason, to borrow President Obama's word, to hope for better days ahead as we celebrate today.

I looked at a lot of poorly shot and way-too-long videos of fireworks displays before finding this beautiful one from New York City. The background music, to which the fireworks are gorgeously edited, is the national anthem recorded many years ago by Fred Waring and his Pennsylvanians. Remember them? [1:55 minutes]

As Thomas Jefferson (and many others) counseled, “The price of liberty is eternal vigilance.” In case you missed it yesterday, here is a repeat of Saul Friedman's Reflections column recounting the year President Nixon tried to cancel the Fourth of July.

Does anyone remember when a president and his cronies tried to take our Independence Day from us? It happened on July 4, 1970 and I was there.

That was the year when the era, the values and the spirit known as the Sixties reached its climax – for good and for ill. The Beatles broke up, but protest, the stuff of freedom and democracy, was in the air. So was caring, for lives, for the future, for peace and for the earth.

On April 21, with the sainted Senator Gaylord Nelson of Wisconsin leading the way, the nation celebrated its first Earth Day and the environmental movement came of age. But less than a month later, on May 4, four students were killed and others wounded at Kent State University, by the jittery members of the Ohio National Guard sent by Republican governor, James A. Rhodes, to quell a campus protest with loaded rifles. What happened was inevitable.

You must remember the photo of a young woman, Mary Vecchio, screaming over the body of a fallen student, Jeffrey Miller. 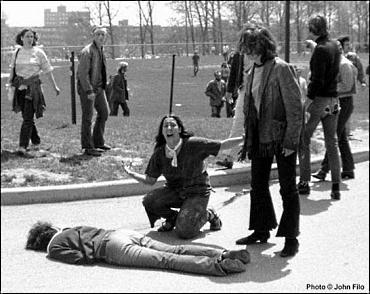 The kids at Kent State, as well as students on other campuses, were protesting Richard Nixon’s decision to widen the Vietnam conflict with the unauthorized bombing of Cambodia and an invasion of Laos, which revealed that U.S. forces had been secretly fighting – and dying – in Laos in violation of the law.

Following the Kent State massacre, campuses everywhere exploded with angry, shocked protest; even the kids at my daughter’s middle school walked out. And thousands descended on Washington in some of the largest protests ever seen in the capital. Richard Nixon, who couldn’t sleep came out of the White House in the early morning to talk to students camping near the Reflecting Pool.

The students reported that the president seemed high on drugs and spoke to several of the protesters not about why they were there, but about the surfing near the western White House in California.

Anyway, as July 4 neared, there was fear in the White House and among supporters of the war that Americans might mark Independence Day by protest or by petitioning their government to hear and pay mind to their grievances. Imagine! Free speech, dissent, on the day the nation celebrates a revolution? That could not be.

And so, the Rev. Billy Graham and comedian Bob Hope, two of the nation’s most eminent cheerleaders for the war and for Richard Nixon and his “silent majority,” agreed to co-sponsor their substitute for Independence Day. It was called “Honor America Day, ” as if it dishonored America to honor the First Amendment.

The same White House cabal that was already at work against the anti-war movement in an illegal effort that became Watergate, helped organize Honor America Day to give aid and comfort to Nixon, his thieving vice-president, Spiro Agnew, and to charge that the millions opposed to the war were subversive and un-American.

Veterans organizations, Republican groups, religious types, the Boy Scouts and other professional patriots called thousands to the Washington Mall near the Lincoln Memorial. I doubt if they knew much about the union Lincoln saved. Only a few visited the nearby memorial to Thomas Jefferson who gave us the right of revolution and whose words are inscribed above his statue: “I have sworn upon the altar of God eternal hostility against every form of tyranny over the mind of man.”

Billy Graham gave the keynote address and noted that Nixon, from his White House window could see the crowd. “That’s the one nice thing about America, “ Graham said. ”You can get a crowd like this together without a football game and what a gathering.”

July 4 that year fell on a Saturday and I was pulling the weekend duty at the Knight Newspapers Washington bureau. It fell to me to do a story on the gathering, but I needed a fresh angle.

What I did was circulate a phony petition seeking signatures from people in the crowd. I told people I represented a group called The Sons of Liberty, and I showed them the petition which read something like this:

PETITION
“As the Declaration of Independence says, the people have certain unalienable rights to life, liberty and the pursuit of happiness. Governments derive their powers from the consent of the governed. We believe that whenever any government becomes destructive of these ends, it is the right of the people to alter or abolish it and form a new government that will provide these rights. Please join in our appeal.”

I left spaces for people to sign, but couldn’t get more than two or three signatures. Most of the dozens of people I approached were suspicious that I was some kind of anti-war activist. I assured them that was not my purpose and still most refused on the grounds that, “it sounds subversive. I’m not for overthrowing the government.”

When I told them that the petition simply echoed the words of the Declaration of Independence, some were embarrassed, others just shrugged but still declined to sign; “I don’t sign petitions,”they said. On this Independence Day, people were afraid to sign a petition.

But I remember most clearly an encounter with a young civics teacher from the Midwest who had brought with him a number of his students. They were gathered about us when I asked the teacher if he would sign my petition. He read it carefully and refused, telling me, “I can’t agree with that.” I told him and his students, “The words and ideas come from the Declaration of Independence.”

I showed him the relevant passage from a copy of the Declaration. “You tricked me,” he said. His students laughed at his discomfort. But I think he learned something. And I had a story.

Fortunately, Honor America Day died with that day. From then on, Washington got back its Independence Day with all the bells, whistles, music and fireworks on the Mall, as John Adams intended. Unfortunately, the killing in southeast Asia went on for five more years.

My little sister was a junior at KSU (where I also began my higher education) on that fateful day so my perspective is a tad skewed. It was a dreadful tragedy on a campus was inexticably changed in a few days. There are a lot of theories on why it happened that have been presented. I know which one I buy -- mostly because I know the general mentality of of the students.

Thank you for this lovely video, Ronni. At least once each year we need to remind ourselves how fragile our Democracy is and be ever vigilant.

I remember what a shock that was at Kent State. We were all battered by the assassinations, shootings, protests, chaos, dogs, fire hoses, riots, body count, Vietnam War on the news every night, and so much more. Those were exciting times that changed me forever. The music was great, too.

I wouldn't have signed the petition because I'd have been paranoid that it was a trick to get me on an FBI list. I know. What can I say?

Yes, it was from the Declaration of Independence, but if the Revolutionaries had lost the war, they'd have been tried and probably hanged for treason. That's a subversive document and amazing in that it set out the reasons logically. Those were brave, committed men who signed it.

This is the first time in a looong time I'm happy about who is in office as president and the direction the country is moving in. Whoo hoo!

I often learn to treasure what I take for granted (freedom, democracy, the rule of law, among other blessings hard earned and endlessly threatened) from newly-arrived refugees — victims of torture, trauma, persecution, and more in their native lands. To witness a shining example of courage and right priorities, listen to a Bhutanese refugee in Atlanta who came to a Fourth picnic that we volunteers threw in honor of him and his community — our new neighbors.

That music warmed my heart, as a Canadian, we love visiting the USA, and so so every chance we get. We enjoy our American brothers/sisters. Enjoy your day.