Avian Moonwalk This has nothing to do with aging, but it's cool. I found the video a couple of days after the death of Michael Jackson. It's a bird that does a pretty fair imitation of Jackson's moonwalk. [1:15 minutes]

Shape Up in Six Minutes a Week There is a fascinating, new study on how much exercise we need to be doing to improve and maintain fitness. How does six minutes a week strike you? But I don't believe it. Read more here.

Nepotism 1 Okay, he's an old friend going back about 30 years, so I'm prejudiced. But 70-something Lewis Grossberger's new blog, recently renamed Grossblogger, is a satirical look the daily news. It is consistently funny and frequently more spot on than the oh-so-serious newspaper and silly television pundits. Do have a look. Also, I had previously overlooked another section of Lew's blog, My Headline Grabs. Check that out too. It's much more fun than Reuter's Oddly Enough Report.

Elder Medical Crisis As I've mentioned more than once in recent weeks, there are only 11 departments of geriatrics at the 145 medical schools in the U.S. A week or so ago, Roseann M. Leipzig, a professor at Mt. Sinai School of Medicine (which does have a department of geriatrics), contributed an important Op-Ed piece at The New York Times in which she writes:

”...there is no requirement for [for doctors to have] any clinical training in geriatrics, even though patients 65 and older account for 32 percent of the average doctor’s workload in surgical care and 43 percent in medical specialty care, and they make up 48 percent of all inpatient hospital days.”

She also explains why you should do everything possible to stay out of a hospital during summer. Read it here.

Nepotism 2 Another old friend, 65-year-old John Brandt, performed recently with his granddaughter's ballet teacher Brenda Froelich in a ballet they choreographed, The Letter. As he titled the email telling me about it, here is “Old Man in Tights.” [8:01 minutes]

In Search of Dignity As many commenters noted on an Op-Ed at The New York Times last week, I do not generally agree with columnist David Brooks. But this time, he zeroed in on a topic I feel strongly about but have not yet written about while I work out whether it just an old fogey's complaint.

”Americans still admire dignity,” he writes. “But the word has become unmoored from any larger set of rules or ethical system.”

And he gives some damned good reasons to support his claim. Read it here.

Old and Wise You gotta love a woman who is as straightforward as this:

“I don’t remember anything until high school. I grew up in the Bronx and Washington Heights. I watched the George Washington Bridge being built. I was a pretty wild kid, running around with a lot of guys.”

“Caregivers suffer more than patients. They were getting sick, getting stressed, feeling hopeless. You have to take care of yourself as well as the patient.”

“I smoked. Seventy-something years. I just quit three months ago. Cold turkey. I quit because I got a bronchial infection. I like red wine, a glass with dinner. I used to drink Scotch. I was a Scotch maniac.”

That's gerontologist, Emma Shulman. She did some of the first research on how to care for Alzheimer's patients and she lectures on memory retention. Currently, she is consultant at New York University's Langone Medical Center, is taking a second master's degree at Hunter College in cultural anthropology, is also studying acting and writing.

Facebook Showing Its Age As reported in Business Journal, the number of high school and college users of the social networking website has dropped 17 and 22 percent respectively while the number of 55 and older users has jumped by 514 percent to 5.67 million. More here.

Nepotism No. 3 My brother, Paul, who is a newspaper editor, and his new wife live on a houseboat in Portland, Oregon, not far from Sauvie Island (for readers who know the area). There is room to keep his sailboat tied up next to their “back porch.” 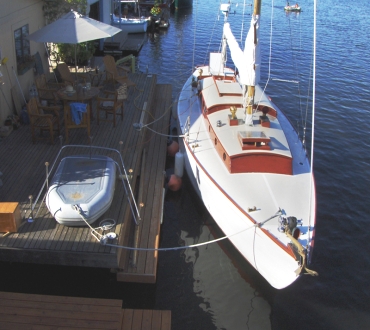 He emailed this week to tell me about his recently-acquired Captain Cat (dog lovers may want to move on to another blog now) who has six toes.

“...despite the reputation of six-toed cats as sure-footed 'ships cats'," writes Paul, "Captain Cat has now fallen into the river twice. We have never seen her fall in. We only have noticed her walking through the living room, totally soaked, taking long slow steps and, at each step, stretching out a rear leg and shaking it off.

“She really is sure-footed, so it’s hard to imagine how she ends up in the river. She is fascinated by the birds here, of which there are many - blue herons, bald eagles, ospreys, geese, cormorants and many varieties of little birds like red-winged black birds.

"She is transfixed by them and pursues them relentlessly. We suspect she gets so fixated on them and trying to capture one that she forgets that the next step is wet.

“Captain Cat has not been sailing yet, but she likes the boat very much and spends a lot of time aboard exploring all the nooks and crannies. Here, she is concerned about the afternoon wind and the following sea.” 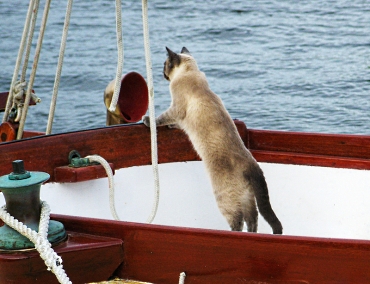 I'm a 'dog person' myself but I love your brother's cat story, and the accompanying pic of Captain Cat. Love the image of Capt. Cat shaking the water off his legs as he walks through the living room.

And as she walks by, shaking the water off each foot, she is conveying the message, "I meant to do that."

P.S. Any chance she is going after fish just below the surface?

I suggest a little PFD for Captain Cat and a life line. With a locater!

I love the pictures of Captain Cat and the sailboat. I have always thought living on a houseboat would be neat, most who live on one love the lifestyle. The cat is funny. Good thing she can get back on board :)

Love the bird video - he is SO smooth!! The other video is nice, too. I'm going to visit the new blog now.

Loved the moon walk and Captain Cat. The others will take some time, but I will investigate. Thanks, Anne.

The Letter video was lovely. So was the story of your brother's cat. Strange that the cat is able to get back on the houseboat after a swim. Very agile fella.

I think there is merit to David Brook's op-ed piece. We have lost something of gracious living along the way.

Hi Ronnie,
Thanks for the tip on Grossberg's blog. He is a very funny guy with a Jon Stewart sense of humor. (What other kind is there?) I also looked at his Second Messiah blog--loved it!
Re: David Brooks. One of the only programs I watch with any regularity is the Lehrer News Reports--not only for its excellence in serious reporting, but also because of Brook's appearances--especially on Fridays when he and Mark Shield revue the week with Jim Lehrer.
I too have often disagreed with Brooks, but it appears that he keeps moving more and more to the left which makes him less and less an ideologue. Anyway, I thought his column on dignity was phenomenally insightful and thought you might be interested in this short TV clip that came about as a result of the column. This is very funny.

PS Pretty neat boat-- your brother must be rich!

The David Brooks piece was also in the Montreal Gazette. Good one. Love that story about your bro, cat and boat. He has a beautiful lifestyle. Wow. So cute the way the cat is checking out the water. Cats love doing detective work. They should all wear little cop shields.

And also thanks for the 'heads-up' on the Mark Brooks column. I could not agree more with his assessment of this lost art!

I, like Mr. Cassell, watch he and Mark Shield on the Lehrer report every Friday. And thanks Mr. Cassell for the link....it was a hoot!

I loved the video of John Brandt who at 65 is dancing--and very well. Thanks for such an especially packed Saturday!