Home About Archive Contact
Sense(s) of Annoyance
ELDER MUSIC: Musicians You Should Know About - Part 2

Correction
A couple of weeks ago, in mentioning the blog of my old friend Lew Grossberger (who is very funny), I said that he is 70-something. Wrong! Our mutual friend Joyce Wadler, who writes for The New York Times (here's one of her recent stories), emailed to remind me that he is 68.

Too Old to be Trusted
Although Walter Cronkite's death did not garner nearly the attention of Michael Jackson's, the news media generally fell all over itself in praise of “the most trusted man in America” omitting the fact that it was his age that forced his retirement at 64. Here is one writer who did notice. (Hat tip to so many who sent this link.)

Elder Crime
For the past ten years, the number of crimes committed by old people has been on the upswing:

“In April, two sisters, ages 65 and 70, were busted in Stroudsburg, Penn., for selling heroin.

“Akers speculates that many elderly arrestees are career criminals who maintain the stamina and strength that crime typically requires. “Late-onset criminality is very rare, and typically financial in nature,” he says.”

Also due to boredom, according to another expert. Read more at In These Times.

Best Geriatric Hospitals
At U.S. News, there is an useful list of the best hospitals ranked by score and reputation. You can search by medical specialty (including geriatric care), state and hospital name.

Summer's Bounty
My experiment this year with growing vegetables has been largely thwarted by squirrels and an excess of rain in deluge proportions. Elsewhere, however, it has been a banner season. The apricots seem to be sweeter than in years past. The “Rainier” cherries (we called them “Queen Anne” when I was a kid) are exceptionally tasty and larger than I remember. 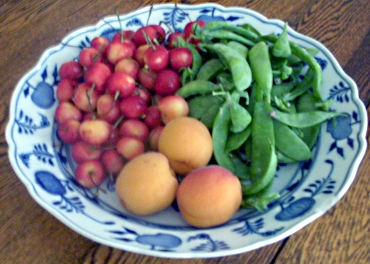 The peapods appear at the weekly farmer's market for only two or three weeks before they are finished for the year. They are larger and less shiny than the Chinese variety and so sweet I munch on them like candy. It's good none of this stuff is fattening.

Small Pleasures
If you're not a fan of Verlyn Klinkenborg, you should be. Each Sunday (and, occasionally, other days) on the Op-Ed page of The New York Times, he publishes exquisite, little, philosophical essays that are about much more than the farm life he recounts. Last week, he compared the sleep patterns of humans and farm animals:

“What I find especially admirable is the animals’ attitude toward daytime sleeping. It is without prejudice because, unlike humans, they know that there is no propriety in sleep. It steals upon you when it steals upon you. You are not a worse chicken for snoozing in the early morning...”

Read the rest of the essay here.

Comparison Tool for Health Reform Plans
The website of the Kaiser Family Foundation has published a tool to aid in comparing the several health reform plans working through Congress. Details change fast as senators, representatives, lobbyists and the president juggle various interests and I don't know how up to date the tool is. But it should help in sorting out the main features of the plans.

Out of One's Element
My young friend Stan James, who I met at the Gnomedex conference in Seattle in 2007, has recently arrived in Berlin where he will live for the next year. He has posted a thoughtful story on his blog about being a stranger in a strange land:

“...childlike in feelings of powerlessness,” writes Stan. “Not knowing how to properly take out the garbage. Not being able to participate in 'grown up' conversations. Having to ask questions all the time.”

Abandoned Blogs
Harper's Index reports (not available online) that according to Technorati, an estimated 94 percent of all existing blogs have not been updated in four months. How is it, I wonder, that Time Goes By and many of your blogs are still going strong after four or five years.

Captain Cat Update
Two weeks ago, I introduced you to my brother's feline house(boat)mate, Captain Cat, who has a strong interest in the river on which they live, the sailboat and the surrounding wildlife. Following up, Paul tells me,

“Captain Cat fell in the river again yesterday evening. I had just arrived home to find that Isa had purchased a bottle of champagne for us to share on our dock in the Adirondack chairs. Captain Cat was seated on the edge of the dock studying the water, as she often does.

“When I popped the cork on the bottle, there was a splash near where Captain Cat had been seated. We surmised the popping of the cork jarred her little psyche and sent her over the side. I ran over to check on her, but by then she was out of sight under the dock - she can climb up on the large logs that support the house. About an hour later she was back on the dock shaking the water off her legs again.” 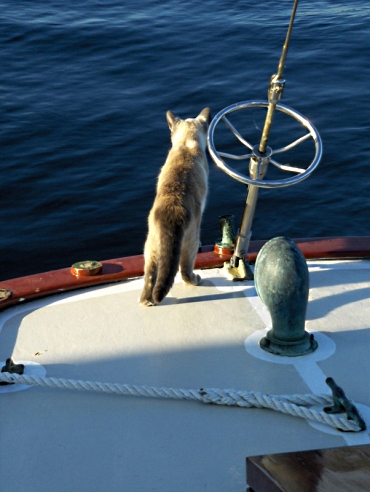 Captain Cat, who had been been abused by her previous owner, lived mostly under the bed for the first three months after my brother and his wife brought her home. Her life now seem idyllic:

“She might actually think she has died and gone to heaven,” writes Paul. “She has made this end of the dock hers by challenging the big bruiser of a tabby cat that used to stalk our neighbor's bird feeder. He never shows his face here anymore. She thinks the neighbor's house is an extension of her house; she wanders in and out. She likes to spend time on his upper deck and roof watching the birds.”

Or, sometimes, sniffing the halyard on the boat looks like cat ecstacy. 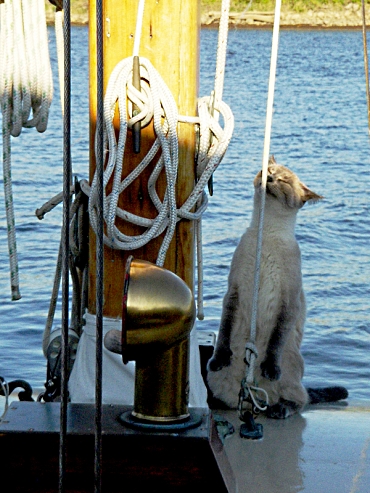 “In the photo of her diving off the boat, I am sad to report she is diving for the dock, which at that end of the boat is about four feet away. It looks like she is making a perfect little dive with pointed forepaws into the river.” “I am not sure, but I think she only falls into the river, although she might be going after a big fish or an otter or even a goose - we have two kinds, domestic and Canadian. Sea lions occasionally come here from Astoria. One of those I think would eat Captain Cat in a single bite.”

Keep those cat photos & stories coming, Ronni. I love them.

I love your Saturday Special! Verlyn Klinkenborg I find not to my taste though the title of the piece you hold up caught my attention. And, seeing the animal wisdom he highlighted, I looked at my napping cat and took my first nap is far too long.

Your young blogger in Berlin nails it for me as a third-act, part-time resident citizen of another country (Israel). I think the disorientation on managing (or not) the myriad cultural disconnects has more rejuvenated me than undone my equilibrium. Going back (voluntarily) to an earlier, more vulnerable time... childhood, empowers if it doesn't unhinge us!

Bernie Sanders has it right. Those opposed to a Single-payer reform are in the pockets of the Private Insurance Companies and their deep pockets. They are distorting, lying and mis-characterizing the reform.

Captain Cat is so cute. I love the picture of her diving off the boat.

Great smorgasborg. PLEASE send your rain this way--our area of the Texas Hill Country is so dry that towns are under water restrictions and wells are drying up. They've had more rain in the Chihuahua Desert.

Loved Captain Cat. She's a trouper, or is that sailor? More of her, please.

I apologize for my sparseness lately; real life has made reading and responding a bit more sparse. But I love the Captain Cat stories!

As for the TV news, part of the reason I don't watch it at all is the LACK of such figures. The more they pep it up and youth-ify it, the more it resembles a performance instead of information, and the less comfortable I am with it, until quite a while ago I ceased to be willing to watch it at all.

I'm so angry at the refusal to listen to reason in the health care debate in your country. Here is a link to the UK Observer article by a whistleblower from the insurance companies http://www.guardian.co.uk/world/2009/jul/26/us-healthcare-obama-barack-change
Bernie Sanders has it right.

On a lighter note, Captain Cat is so adventurous and athletic. Gorgeous.

I finally took an afternoon to catch up on a number of TGBs, and of course they lead to such delicious links one can while (wile?) away hours. Thank you!

Cap't. Cat is just darling and reminds me of our blind feline character, Jack, who fetches the scrunched-up Netflicks cover by sound, among his many talents.