A Calm Beginning Today Because most of the rest of this week's Elder News is devoted to health care reform which is proving to make almost everyone testy, let's catch our collective breath first.

This amazing photograph arrived from Darlene Costner of Darlene's Hodgepodge who is one of the strongest elder supporters of health care reform. It is sunset at the North Pole with the sun below the moon. Gorgeous. 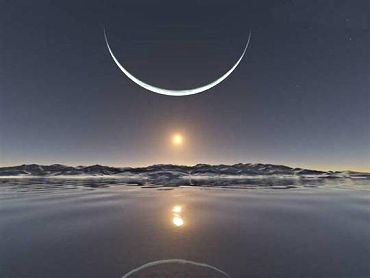 ”Deathers” Prevail This is how bad it is in health care reform land this week: Thanks to the ignorant masses at town hall meetings (too many of them elders), right-wing media blatherers and Sarah Palin's fictional death panels - all of whom have scared the pants off our timid legislators - Republican Senator Charles Grassley of Iowa, on Thursday, announced that the end-of-life provision in the Senate Finance Committee's health care reform bill has been dropped. Read more here.

End of Life Planning Senator Grassley and the "deathers" need to consider this column about people without end of life plans titled, The Dignity to Die is Part of Our Shared Humanity. (Hat tip to Chancy of driftwoodinspiration.)

ELDERS FOR HEALTH CARE REFORM Next Thursday, 20 August, has been set aside as the day for elders to rise up and show Congress and the U.S. that not all of us want to keep our single-payer system – Medicare – and deny everyone else similar benefits, which is how it appears, to my deep embarrassment, in widespread media coverage of town hall meetings and interviews with elders.

If you have not read it, the initial post for this project is here. Please plan to join in on 20 August if you have a blog.

Spreading the Word Jan Adams who writes the monthly Gay and Gray column for Time Goes By and blogs at Happening Here, has been spreading the word for 20 August around the web. Two of her posts are here and here.

Jan also created this Elderblogger For Health Care Reform badge that you can post on your blog. I've linked mine to my original post for the project. You can link yours to anything you think will explain our point of view and spread the word. (Right click to save the badge to your hard drive so you can post it at your blog.)

Desperation of the Uninsured So many people showed up for the first day of week-long, free health clinic in California that hundreds were turned away. Fifteen-year-old Ayana Kleckner slept on the sidewalk overnight to be sure to get an appointment:

“"This is a miracle, but people shouldn't have to sleep on the street to get medical care,' Ayana said while waiting for an eye exam. 'It was adventurous, if you could put it that way, but I don't think I should have to go through that to make sure I'm healthy.'"

A key point about this free health clinic is that it is run by the Remote Area Medical Volunteer Corps which, for 25 years, has provided health care services to third world countries.

Read more about the free health clinic in Inglewood here and here.

Uninsured and Dying A study from the Institute of Medical Analysis reports that 22,000 Americans die each year due to lack of health care coverage. Read it here [pdf]. Since 1993, when Hillary Clinton's health care reform failed, that adds up to more than the number of U.S. soldiers who died in World War II, according to Mark Ames at Alternet. Read his report here.

Health Care Profiteers Did you know that the federal government pays subsidies to insurers who sell Medicare Advantage plans (essentially, private Medicare) amounting to between 13 and 17 percent above what is paid for traditional Medicare? A lot of that goes to the obscene salaries and bonuses for insurance company executives. For more information on insurer excess, watch the video:

U.S. Health Care is NOT the Best NPR has posted an interactive page where you can compare the elements of various countries' health care plans to each other. It is an eye opener. Try it out here.

Ten Awesome Things By analyzing the draft reform bills currently in circulation from Congress, Joshua Holland has produced a list of Ten Awesome Things That Would Happen if Health Care Reform Passes. It's definitely worth reading.

More Health Care Reform Resources In addition to the above to help you further in preparing for 20 August, Slate's Timothy Noah has published a terrific guide to some of the best health care reform information on the web. See it here and use all these resources for your 20 August Elders For Health Care Reform posts.

Senior Moment And here's a little fun to end today's list. You think you've had embarrassing senior moments? Wait until you see this one actor and activist Martin Sheen experienced. Enjoy.

The NY Times has an article today (at http://www.nytimes.com/2009/08/15/health/policy/15ground.html?th&emc=th) about the failure of Obama supporters to come out in support of his healthcare plan now that the election is over. Big shame! I thought that one of the most admirable things about Obama was how he opened up the possibility for Americans to really participate in changing their world, and look who is taking him up on it, the Radical Right!

Maybe youth who were a big part of Obama's election support just don't see healthcare as a sexy issue, they're healthy and immortal so why should they?

I was one of the millions of people without healthcare until I turned 65 and got on Medicare. Which meant my RA and OA got worst and worst, until now I am in a "heck" of shape. I will write about and post in next week.

I already have my post for the 20th written and ready to go. We just can't give up sending a message of support until the people in power hear our pleas over the noise of the radical right.

If you truly care about your children and grandchildren you will do it for them.

Does anyone besides myself wonder just who is in charge of these meetings where a vocal minority heckle and jeer until the speakers give up? In any public meetings that I have seen, a sergeant at arms or someone similar would remove the unruly people. I have not seen this happen at any of these meetings. I don't care, Democrat or Republican, if you're not civil, you should have to leave. So where are the authorities or are they under some order to just let things happen? I'm curious.

Re the photo: I got that in email and then I got another email refuting it - saying the photo was a hoax and not possible from the North Pole. I don't know which one is true.

Amen, Anne. We have met the enemy and he is...us.
If health care reform is defeated, it will be the American people who defeat it: those who are vocal, and those who are silent.

Dang, according to Snopes, Kenju is correct about the photograph.

Nice to know, but I still think it's a gorgeous photograph.

Steven, I totally agree. Regardless of one's opinion, the scheduled speakers have the right to state their case. Shouting down a speaker should not be tolerated from the right or the left. There's a time for heckling and jeering and then shut up and be respectful of the person, if not their ideas.

About the health care package that the administration is trying to RUSH into being. I trust no salesman who says I must just agree right now because the door will slam soon. In 30 years of working in Manhattan I've learned that super-rush jobs leave so many loose ends that have to be fixed, cause errors, and require extra expense to correct, that it's just not worth it. There is no dire emergency here. We should allow our lawmakers all the time it takes to devise a program that will last for 20 or more years at great expense. "The only time I have to make a rush decision is when I'm faced by the tiger."

There is a good graphical representation of health care systems in the U.S., U.K., France and Singapore at the BBC website sent to me by Ian at Panchromatica.

As perfidious as these sycophants might seem,they invariably provide ample testimony to expand Mental Health provisions for Universal Healthcare.

A birther/deather/teabagger started a big fight in my comments when I wrote about my deep sadness for those being manipulated into disrupting the town hall meetings and how fearful I am of their violence.

This excellent post is up to your usual standards, Ronni - well-researched, rational, reasonable, and compassionate. I'm so glad you blog! I don't always comment but do read! :-)