Due to dropping Saturday's This Week in Elder News and Peter Tibbles' assumption of Sunday Elder Music duties, I've been able to reclaim some time for myself and for pursuits other than Time Goes By. I'm feeling almost human again after years of seven-day-a-week blogging and its associated requirements.

But, damn, I like the Elder News feature, collecting items that don't need an entire post, but that I think will interest you as much as they interest me. Here are a few that have turned up just since Monday with no effort on my part.

Debtor's Revolt: Ann Minch, who lives in Red Bluff, California, has said No More to credit card companies' usurious interest rates. Minch is no deadbeat and she is not behind in her monthly payments, yet Bank of America raised her rate to 30 percent. So she is refusing to pay until they reduce her interest rate or offer her a reasonable buyout. Watch her challenge [4:28 minutes]:

I would join her, but I use my credit cards only for convenience and pay them off each month except when I pay only half now and then in hopes of forestalling a cancellation. You can read more about Ann Minch's campaign at Huffington Post.

Late Life Happiness: This is National Assisted Living Week and The International Longevity Center, where I spent an enlightening week in June at their annual Age Boom Academy, has issued a report on senior living facilities as related to late life happiness. Based on input from experts including physicians, geriatric and gerontological specialists, public health scholars, nurses, social workers, senior living officials and others, it concludes that senior living communities may be the best choice for maintaining independence and life satisfaction.

“'Combatting the negative societal images that falsely link senior living communities with losing independence is productive and necessary for all of us in our rapidly aging society,' said ILC-CEO Dr. Robert Butler.”

You can purchase the report at the International Longevity Center website or download a free copy here [pdf].

Doctors Support Public Option: According to a new study from the Robert Woods Johnson Foundation published this week in The New England Journal of Medicine, 63 percent of physicians support a public option to be included in any health reform bill. I suspect they have a better idea of what is needed and would work than the nay-saying Republicans and blue dog Democrats. 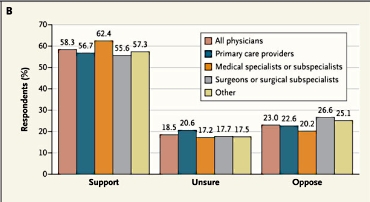 You can read the entire survey results here and here.

Keeping Up With Reform Bills: Among the four or five reform bill drafts floating around Congress, only two have been submitted to Congress as bills so far – one in the Senate and one in the House. ProPublica has created a search page for both of these bills and they promise to keep them updated as changes are made.

These are definitely worth bookmarking to keep up with claims of what is or is not included along with any accusations of lying shouted in Congress or elsewhere.

I've always enjoyed the Elder News feature...perhaps you could keep up with it by adding them as a 'footnote' on whichever day you find them. I would have said you might 'sidebar' them...but your sidebars are filled to the brim!

Yay! Glad to see this again!

I admire Ann's tenacity in going up against Bank of America...

There was a segment on BOA on yesterday's evening news regarding their Debit Card overdraft charges. They recanted on the subject cases highlighted by the news story and dropped the excessive fees but I am reasonably sure only because the media got hold of the story. Unlike Ann’s case however, the folks suffering from overdraft fee charges do need to own up to their responsibilities to avoid such charges. In Ann’s case, she is simply being screwed!

I suspect Ann's plight will not have a happy ending unless she is able to solicit the media's attention in her efforts.

Three cheers for Ann Minch!! Like you, Mom pays off the one credit card she uses in full each month. She has already decided that if they start mucking around with the terms she will return it in itty bitty pieces with a strongly worded letter. We have our debit card so the credit card is a highly dispensable convenience. I also enjoyed the news section and hope that you continue it in some form. I may not always comment but I always read.

I'm really impressed by Ann Minch. My own response to credit card usury was more timid when I canceled my Discover card. The company asked why, and I said, "Through your usurious interest rates and general indifference to your customers, you have managed to turn this loyal customer into an ex-customer. I will never hold or use a Discover card again."

There was no response.

I am grateful for whatever posts you have the time and inclination to publich.

Elderblogging 2.0 is how I see my shifted perspective and look forward to hearing from others in similar situations--or considering such a move. Thanks for your support, Ronni, as I embarked on leaving NYC.

Ronni, I LOVED Elder News and never missed it--hit reports notwithstanding. So glad it's back!

I posted the chart from the NEJM article on my own site earlier; pretty much sums it up, doesn't it?

I miss the news feature and would love to be reading these items once more. So glad to hear that you are taking good care of yourself.

I enjoy this feature even though I have been somewhat of an erratic reader. Every time I've come here I always find items of special interest I may not have noted elsewhere. I hope you continue to offer it when the spirit moves you.

I've been railing about usurious credit card rates in California for years. My fury has been partially focused on our State Legislature for not setting limits/caps. Since the financial collapse what has happened in banking has resumed being immoral and unethical.

Like you, I generally pay off monthly and only occasionally have an amount carry over. Most recently I've been really incensed with the commercial banks, including the one she names. I have verbally expressed my views in person to managers and on the phone, asking they pass along my brief but pointed message to the powers that be.

The card companies are greedy to the umpth degree and perhaps should content themselves as should the rest of us with slow growth for a change and smaller percentage profits. I think Wall Street is going crazy again and banks are part and partial of the rush to financial market madness.

I think Ann Minch's effort is correct that numbers of individuals are needed to attract attention. I hope the numbers develop because I certainly respect her goal and will continue to make my views known.

Thanks for this. I LOVE This Week in Elder News!!