I know that train songs are a cliché and Ronni has already done a piece on them, but I haven’t written about them yet, so that’s what it is this week. 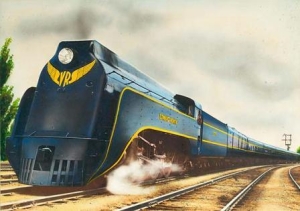 This is the Spirit of Progress. Way back, every day one of these trains left Melbourne for Sydney. An equivalent train left Sydney for Melbourne. I can imagine that the time they took between cities was faster than it is today. We don’t have a French or Japanese style bullet train (and there’s none on the drawing boards. Okay, they are probably on the drawing boards but that’s as far as they’ve traveled).

I didn’t ever ride on the Spirit. I did, however, travel quite often on the equivalent train between Melbourne and Adelaide. This was called The Overland. 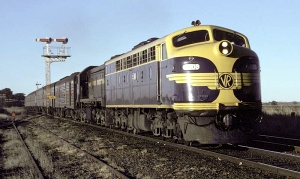 We kids thought this was a wussy name compared with the Spirit of Progress. By the time I could have ridden on the Spirit independently of parents, it had been replaced by an ordinary looking train resembling the Overland.

In the early sixties, another train began on the Melbourne-Sydney route called the Southern Aurora. This was an express between the two cities and first class all the way. It didn’t last long and turned up its toes (or its wheels, I guess) in 1986. I assume everyone was flying. More fool them.

One day in 1969, the Aurora left Melbourne and on its way north it met a goods train that really should have been somewhere else. This is a picture of the Aurora not long after.

To the best of my knowledge there were no tunes written about the Spirit or the Overland. There was certainly one written for the Southern ‘rora by the Joy Boys.

In the interest of (semi-)completeness, there’s the Indian-Pacific that runs from Sydney to Perth which is a hell of a long way. It has a song, but I’m not playing it. There’s the Ghan that runs from Adelaide to Darwin, desert all the way. There are others (this is huge country), but that will do. 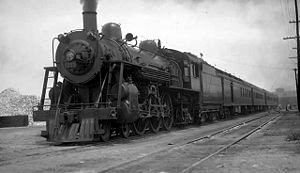 By a nice coincidence, my favorite train song is Panama Limited as performed by Tom Rush.

In 1974, this train had a name change to the City of New Orleans. Actually, there was already a train of that name that ran during the day on the route. After Arlo Guthrie had a big hit with the song the Panama Limited’s days were numbered (well, the name was). Every man and his dog has recorded this song so it may have been forgotten that it was written by Steve Goodman. Here’s Steve’s version from the “Easter Tapes.” 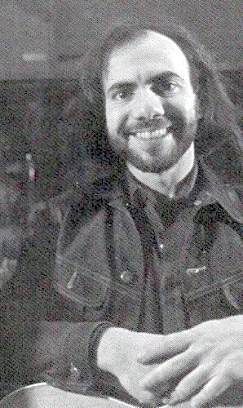 How many songs have been written about Casey Jones? If you want to know the exact number I can give it to you – lots. Although there really was a person called Casey Jones most of the songs play fast and loose with the truth. This is one of those. The Grateful Dead, Casey Jones. 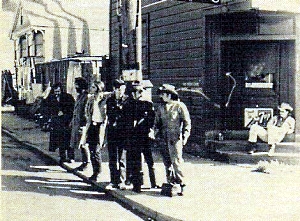 Guy Clark has written some fine train songs, two of which appeared on his terrific first album called “Old No. 1” (which sounds like a train itself).  The more famous one was Desperadoes Waiting for a Train. I’m not going with that one. This is Texas 1947, but not from that album, instead from “Keepers.”  Guy introduces the song. 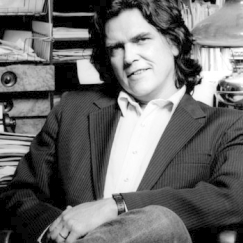 For the final track I wondered which of the 30 or 40 songs I had thought of (and that’s without googling). My initial instinct was to go with the singing brakeman, but I changed my mind and decided on a song about him. This is The Train Carrying Jimmie Rodgers Home by Greg Brown. 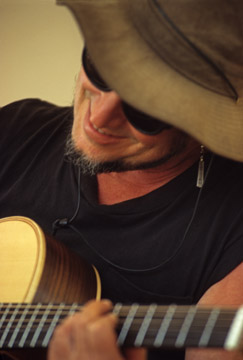 With so much left over, there’s sure to be another. 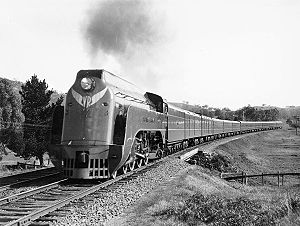 Peter--You will probably get 100 comments saying, "How could you forget X?" where X is the name of a train song.

In my case, X = Wabash Cannonball.

Thanks for this post, Peter. It was a joy to listen to all the songs but that Tom Rush was a jaw-dropper, for sure. It makes me wonder how it is that trains have become such a strong symbol in human consciousness and I suspect that it may have been the tipping point for culture regarding time and schedules. Perhaps the bitter/sweet awareness of time; its arriving; its passing and its possibilities. It is lovely to have so much music available to accompany such meditations.

Great to see your train column invokes Steve Goodman's "City of New Orleans." Goodman often doesn't get his due.

My X train is "Chattanooga Choo-choo" by Glenn Miller's band.

I agree with Darlene My all time facorite too.

Oh, yes, "Chattanooga Choo-Choo"! Plus "Train with a Rhumba Beat".

Where is my mind that I didn't mention "Take the A Train"?!!!