Norma’s Choice: These tracks were chosen by the A.M. (The Assistant Musicologist). 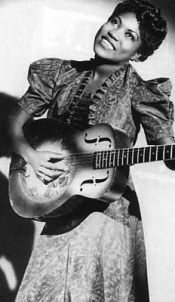 I think of Rosetta Tharpe as a gospel singer rather than a blues singer, however, she was versatile and quite willing to swing either way, so to speak, and perform in concert halls and nightclubs. She toured extensively both in the gospel circuit and on blues tours. Rosetta suffered a stroke in 1970 and lost the use of her legs. She died in 1973.

She has been acknowledged as a major influence by such performers as Elvis, Jerry Lee Lewis (I’m surprised he acknowledges anyone), Little Richard, Aretha Franklin and Isaac Hayes.

She was a strong guitarist, but on her secular tunes she was usually accompanied by a band and later in her career, backed by what would now be called a rock 'n' roll band.

On this track, I Want a Tall Skinny Papa, the backing is more in the big band, jump blues mould. 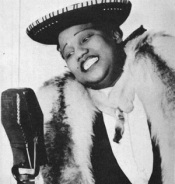 Although born in Mississippi, Lil Green moved to Chicago early in her life and recorded and performed there predominantly. She was notable for her excellent timing and a sinuous voice. Lil regularly performed with Big Bill Broonzy.

Unfortunately, she was often in poor health and died of pneumonia, at the age of 34.

The song Why Don’t You Do Right? has been covered by a number of artists, most notably by Peggy Lee (who did a couple of versions of it) but also Ella Fitzgerald, Julie London, Mark Murphy, Johnny Otis, Mel Torme and Kiri Te Kanawa (Kiri?). It was also featured in the film Who Framed Roger Rabbit? by the character Jessica Rabbit sung by Amy Irving. After seeing Amy in Honeysuckle Rose, I didn’t realise she was a singer.

This is Lil Green performing the song backed on guitar by Bill Broonzy.

Lil Green - Why Don't You Do Right 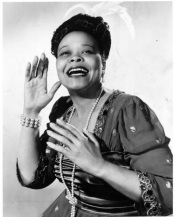 Ada Brown was a singer and an actor and her early career was spent primarily on stage in musical theatre and vaudeville. She was a founding member of the Negro Actors Guild of America in 1936, and worked at the London Palladium and on Broadway in the late 1930s.

Ada appeared with Fats Waller in the film Stormy Weather in 1943, and here sings with Fats, That Ain’t Right. 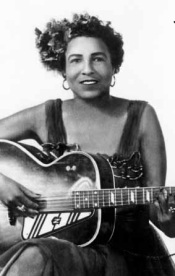 Memphis Minnie has often been cited as the best blues singer of them all [but Bessie still gets my vote – A.M.]. She was born in Louisiana and learned to play guitar as a child. She ran away from home at 13 to perform on the streets and in nightclubs in Memphis and after that, joined Ringling Brothers Circus. She started recording in 1929 and recorded for the next 40 years.

In the forties Minnie formed a touring vaudeville company. It is generally considered that her best work is from this period. She pioneered the use of electric guitar and she took country blues into electric urban blues, paving the way for Muddy Waters and others.

This song is In My Girlish Days from the forties.

In the last few years, there have been a couple of excellent cover versions of this song by Mollie O’Brien and Maria Muldaur, but we’re going with Minnie’s version.

Memphis Minnie - In My Girlish Days 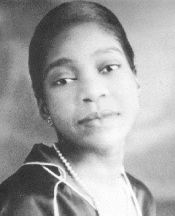 Bessie Smith was born in Chattanooga and her father died when she was very young. Her mother followed when Bessie was nine. To earn money for their family, Bessie and her brother Andrew began busking on the streets of Chattanooga as a duo: she singing and dancing, he accompanying her on guitar.

Her oldest brother joined a traveling troupe of musicians. Some years later, he returned and Bessie joined him as a dancer rather than a singer. This soon changed. By the twenties, Bessie was acting and singing on Broadway and became the biggest draw (and highest paid) black entertainer of her day.

A combination of the Depression and the advent of talking pictures pretty much spelled the end of vaudeville, Bessie’s natural stomping ground.

She was rediscovered in the thirties by John Hammond and he recorded her and these records are the ones that survive today.

Bessie was killed in a car accident in 1937. After her death, a popular story emerged that she died as a result of having been refused admission to a "Whites Only" hospital in Clarksdale. This has now been discredited.

The song is I Ain’t Gonna Play No Second Fiddle.

Wonderful start to a Sunday morning. The blues before 6 AM. Thank you!

"Ya sang the blues so ya don't got the blues no more!!"
Great post.

I once wore out a record of Claire Austin singing "Nobody Knows You When You're Down and Out."

Numerous singers today stand on the shoulders of those you feature here.

Thank you so much for this post. It is one of the best I have stumbled on in a while. I will check back in future Sundays to learn more about music past.

I have just mastered standup comedy at age 89 and now I want to sing jazz scat with a band. Maybe there is hope for me yet.

You can google my story on Evening Magazine, Channel 5, Seattle and click on the video
entitled 88 year old (I was that age when I was video taped) uses comedy to help in her grieving.

Kiri is correct. One of the finest soprano's out of New Zealand. She is Maori and if you have not heard her sing, try to find a record.

Yes, I'm familiar with Kiri. I have quite a number of her albums. I know she has done show tunes and the like, I was mildly surprised she had sung some blues.

I think the reason so many people love Memphis Minnie and consider her the best is because you can listen to her forever. When I put on a CD of hers, I end up tossing on all of hers I have and she keeps me going for hours and hours.

Bessie Smith - I love her - but she's so powerful that I'm worn out after one album.

And Memphis Minnie is considered to be the first woman of any folk genre to write her own songs and accompany herself on guitar. There have been a few others since then ...

Did I somehow miss a prior reference to Kiri? She sang blues? I have only one of her albums so far.