There were seven generations of musicians in the Bach family. Some sixty or so Bachs in all, thirty-eight of whom get their own separate reference in Grove’s Dictionary of Music. Johann Sebastian was in the fifth generation and today it will be the sixth that we’re dealing with.

Old Jo had 20 kids, and I’m considering some of his sons because no matter how talented they may have been, it wasn’t done then for the daughters to become musicians (outside the home). 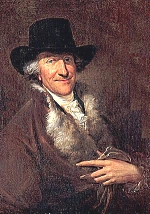 Wilhelm Friedemann was the second child and first son. His dad supervised Friedy's musical education and career with great attention. However, when he was old enough, he enrolled in Leipzig University to study mathematics and he maintained a lifelong interest in the subject.

After graduation he gained a position as organist of the St. Sophia's Church at Dresden. Nothing to do with maths there - I guess the Bach genes won out.

He eventually became the organist in Halle where he married Dorothea Georgi, the daughter of a tax collector. The landed estates she inherited caused the family to be placed in a high tax bracket by the authorities. Unfortunately, they were raising taxes to meet the cost of the Seven Years War, so WF and Lizzie had to sell a considerable part of her property. You’d think her dad would have given them a bit of leeway, but I guess not.

They couple produced two sons and a daughter. The daughter was the only one to live past infancy and she eventually migrated to America.

WF had a reputation for being a learned and able musician and held many positions. Despite his extraordinary facility as an organist, improviser and composer, his income and employment finally became unstable and he died poor and embittered (and a bit of a nutcase, apparently).

The first movement of the Flute Concerto D Major. 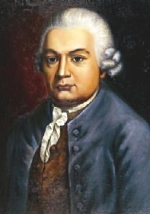 Carl Philipp Emanuel was the fifth child and third son. CPE studied law at the universities of Leipzig and of Frankfurt. However, like his big brother, he switched to music when he graduated and obtained an appointment in the service of Frederick II of Prussia ("Frederick the Great"), the then crown prince. Upon Freddy's accession, CPE became a member of the royal orchestra.

He was, by this time, one of the foremost clavier players in Europe, and he wrote a bunch of compositions for harpsichord and clavichord. He also wrote cantatas (rather influenced by his dad’s style), symphonies and concertos.

Later he succeeded Telemann (who was his godfather) as Kapellmeister in Hamburg, and thus began to turn his attention more towards church music. So a bunch of oratorio cantatas, litanies, motets and other liturgical pieces were forthcoming.

He had a huge reputation in the 18th century and both Haydn and Mozart praised him highly. His influence was not limited to his contemporaries, and extended to Mendelssohn and Weber.

His reputation fell during the 19th century and second-raters like Schumann dismissed him as living in his father’s shadow. Brahms, however, held him in high regard and edited some of his music. This is the first movement of his Cello Concerto Wq 171 B flat Maj. 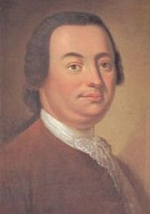 Johann Christoph Friedrich - sixteenth child, ninth son - also was taught music by his father (well, it would be a bit hard to escape this – going into the family business). Some believe JCF also studied law, but some could be wrong as there doesn’t seem to be any evidence of this.

He was sometimes referred to as the "Bückeburg Bach.” Only sometimes, I imagine, as that’s pretty hard to say after a couple of glasses of wine. He was called that because he became a harpsichordist in Bückeburg and then Konzertmeister there, employed by Count Wilhelm von Schaumburg-Lippe.

JCF wrote keyboard sonatas, symphonies, oratorios, liturgical choir pieces and motets, operas and songs. Because of the Count’s predilection for Italian music, JCF had to adapt his style accordingly, but he retained traits of the music of his dad and big brother, CPE.

Alas, a significant portion of JCF’s output was lost in the WWII destruction of the institute in Berlin where his scores had been on deposit since 1917. I guess there were no backups elsewhere. Here is the complete Trio Sonata for two violins No. 2. Johann Christian, the eighteen child, eleventh son. Naturally, he was also taught music by dad (at least until old Jo died when JC was 15). He then worked with CPE, twenty-one years his senior, and considered at the time to be the most musically gifted of Jo's sons.

JC composed cantatas, chamber music, keyboard and orchestral works, operas and symphonies. He lived in Italy for many years and then traveled to London to première three operas. This established his reputation in England and he became music master to Queen Charlotte. He met and married soprano Cecilia Grassi there and decided to stay. They had no children.

Johann Christian's works are quite different in style from his older brothers, possibly because his father was less of an influence on him. He was good friends with Haydn and, especially, Mozart. He had an influence of both these musicians’ styles.

He is of some historical interest as the first composer who preferred the piano to older keyboard instruments such as the harpsichord. JC is generally called the “London Bach” or the “English Bach” (easier to say than the "Bückeburg Bach"). This is the complete Sinfonia in G Maj, Op3 No 6. 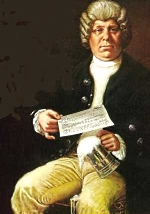 The other sons didn’t amount to much musically (except PDQ Bach, writer of such classics as A Little Nightmare Music, but the less said about him the better). This is PDQ and I think we should leave well enough alone.

I've been a long time admirer of PDQ but find it difficult nowadays to find concerts where he is featured. Have you had any luck?

I found a few on YouTube (some time ago now). There were some others besides these.

PDQ Bach - The Abduction of Figaro

PDQ Bach - The Farmer on the Dole