Farewell to these musicians who died in 2009. The world is a poorer place without them.

In spite of his music that suggested a New Orleans origin, Willy DeVille was born in Connecticut. He said he was “A little of this and a little of that, a real street dog,” having Basque, Irish and Pequot among his ancestors.

He wrote songs with Doc Pomus and some of Willy’s music sounded as if came from the fifties but mostly his soulful singing mixed Latin rhythms with New Orleans R&B style. He was one of a kind. This is Across the Borderline. 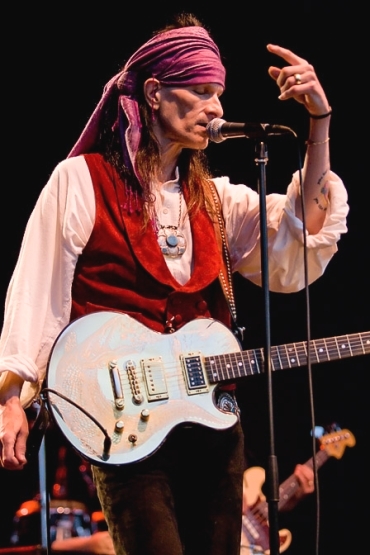 Willy DeVille - Across The Borderline

Mary Travers. Peter Paul and Mary were the biggest selling of the folk performers of the early sixties. They showcased songs by then unknown performers such as Bob Dylan, Gordon Lightfoot and John Denver. She (and they) was (were) also active in civil rights and anti-war causes.

Huey Long. It surprised me that one of the Ink Spots was still alive in 2009, but he was. He was 105 when he died. He wrote songs and played guitar in the group. He had a long and interesting musical journey later as well. Huey is the second singer in the clip.

Les Paul invented the solid body electric guitar and had many hits in the early fifties with his then wife Mary Ford. He was one of the most respected guitar players of the last fifty years and continued performing until his death.

Gordon Waller was the “Gordon” half of the sixties duo Peter and Gordon. Following in The Beatles’ wake, they had several hits at the time helped by songs written by Paul McCartney who was a friend of Peter Asher (the “Peter” half).

Gordon had a not too successful solo career afterwards and was particularly fond of the trappings of success – those that usually bring about their demise. It looks as if Peter and Gordon, especially Gordon, hadn’t learned to lip-sync in this clip (or they just didn’t care).

Mike Seeger could play any instrument that had strings - autoharp, banjo, fiddle, dulcimer, guitar, mandolin, dobro and harmonica. Okay, not too many strings on that last one. He came from a musical family: his mother, Ruth, was a classical composer, his sister, Peggy, a folk musician as was his half-brother, Pete.

He co-founded the New Lost City Ramblers, an old-time string band in the late fifties, and unlike most others, retained his love of traditional playing styles he heard on old 78rpm records of musicians recorded during the 1920s and 1930s. That’s Mike on the right in the clip.

John Martyn was an extraordinarily gifted guitar player and an interesting singer. He also was fond of a drink or two and other substances.

Estelle Bennett along with her sister Ronnie Bennett (no, a different one) and cousin Nedra Talley formed The Ronettes, the most interesting of the “girl groups” of the early sixties.

Eddie Bo was yet another in the long line of great pianists from New Orleans.

Liam Clancy was the youngest and last surviving member of the Clancy Brothers.

Chris Connor was one of the last big band jazz singers, with the Stan Kenton band, to become a solo artist in her own right.

Jesse Fortune was a Chicago blues singer since the fifties who recorded with Willie Dixon, Buddy Guy, Walter Horton and others. He collapsed and died on stage while performing.

Vern Gosdin had one of the finest singing voices in country music, ranking with George Jones and Jim Reeves as a singer. He started with his brothers as The Gosdin Brothers and later had a solo career.

Ellie Greenwich wrote some of the best pop songs of the early sixties with her then husband Jeff Barry. They include Da Doo Ron Ron; And Then He Kissed Me; Be My Baby; Baby, I Love You; River Deep, Mountain High"; Chapel Of Love; I Can Hear Music; You've Lost That Lovin' Feeling; Do Wah Diddy Diddy; Leader Of The Pack.

Maurice Jarre was a French composer and writer of numerous film scores.

Larry Knechtel. Classically trained pianist who played with Elvis, Simon and Garfunkel, The Doors and was one of Phil Spector’s studio musicians (the “Wrecking Crew”).

Marie Knight was a gospel singer best remembered for her work with Rosetta Tharpe during the forties and fifties.

Hank Locklin was a country singer who had some cross-over pop hits in the fifties and early sixties with songs such as Please Help Me, I’m Falling and Send Me the Pillow that You Dream On.

Dewey Martin was the drummer for the band Buffalo Springfield, noted for its excellent musicianship and extreme dysfunction. During the 1970s, he retired from the music industry and became a car mechanic.

Al Martino was a popular crooner my mum liked a lot and a boyhood friend of Mario Lanza.

Richard Meale was one of Australia’s most important classical musicians and composers who dabbed briefly with atonal music but, fortunately, returned to tonality. His best-known work is the opera Voss.

Billy Powell was a piano player in the band Lynyrd Skynyrd who survived the plane crash in 1977 that killed several others in the band.

Kenny Rankin was a singer/songwriter in the James Taylor mold. He also played guitar on Bob Dylan’s Bringing It All Back Home.

Billy Lee Riley was a Sun rockabilly singer around the time Jerry Lee Lewis made it big. He made some fine records including Red Hot and Flying Saucers Rock 'n' Roll. He later worked as a session musician playing guitar.

Dan Seals was “England Dan” in the soft rock duo England Dan and John Ford Coley. He was also the brother of singer, Troy Seals.

Bud Shank was a jazz alto sax player, first with Charlie Barnet, then Stan Kenton. Later he had a strong interest in “World Music,” playing with Ravi Shankar and others.

Gale Storm starred in a couple of fifties’ sitcoms and had some hits at that time, notably Dark Moon.

Koko Taylor was a Chicago blues singer who had several R&B hits in the sixties. She was a great influence on musicians such as Bonnie Raitt, Janis Joplin, Susan Tedeschi and others.

Zola Taylor was the female singer in The Platters when they had all those hits in the fifties.

Geoffrey Tozer was an extraordinarily gifted Australian classical pianist who brought great insight as well as energy to everything he played.

Too late to make the cut…..
Bobby Relf, a Los Angeles soul singer who also recorded using the names Bobby Garrett and Bobby Valentino. He was also the second Bob in the soul duo Bob and Earl.

Mick Cocks, guitarist and main song-writer for the hard driving Australian rock band Rose Tattoo. He is the fifth member of this band to die. Angry Anderson must be getting nervous.

Thanks, Peter (I guess)for the nostalgic trip this morning.....with a final tear to see that Chris Conner left us. Oh, but she was sooooooo good especially "Cry Me A River" that accompanied my broken heart so many years ago. Dee

What a long list! I knew about Mary Travers but not about Gordon (now that song brings up memories), Koko and Clancy. I'm thankful for the joy that these musicians brought and thank you for remembering them so that I can celebrate their lives and mourn their loss.

I missed Marie Knight and Mike Seeger. Both will be missed. She released a very nice valedictory CD in 2007 called Let Us Get Together. Mike Seeger's final album -- Early Southern Guitar Sounds -- is also well worth checking out.

Also…..
Rusty Wier was a terrific Texas singer/songwriter who did his best work in the seventies.

Johnny Carter was a member of two of the best DooWop groups – The Flamingoes and The Dells. He was responsible for the great falsetto in The Dells’ finest recordings.

Dickie Peterson was the singer and bassist for the rock group Blue Cheer whose only claim to fame was that they were loud. LOUD.

- Kenny Rankin had such a smooth voice and style... he will be missed!!
- Larry Knechtel was also with the band "Bread" for a while in the 70's...
- Dan Seals' brother, Jim Seals, was with "Seals and Crofts" (popular in the 70's); maybe Troy is also his name?

Dan, Jim and Troy are all brothers. Sorry, I missed mentioning Jim in the text. There’s also another brother, Brady Seals from the band Little Texas (and other bands).

Some good musicians gone from the ranks.

Dave Carpenter - LA based studio bass player... Played on a million session and was one of the most influencial modern bass players of our time. Heart failure.... Way too young. Miss you Dave!

Great list Tibs! Good to see you keeping alive our tradition of annnual catch ups on who has departed during the year! A time to reflect and be nostalgic for some terrific musicians who have moved on to the big gig in the sky!