REMINDER: Today is Call-In-Day to let our senators know that S.2853, on which there will be a vote this week, is a terrible idea. If you don't know what I'm talking about, please, please read yesterday's post. You can reach your senators at 1.800.998.0180 or you can find their direct telephone numbers at this website.

It started on Sunday when weather forecasters predicted an overnight snowstorm. This is my fourth Maine winter and I thought I had learned to estimate the amount of accumulation when the weather people get dodgy about it, as they did on Sunday. I figured five or six inches which, by Maine standards, is almost a spring day.

Instead, this was the first really big snowfall of the season. Here is what my car looked like on Monday morning, and the storm still had three or four hours to go. By the time it was finished, there was about a foot of snow but a lot of larger drifts from the wind. 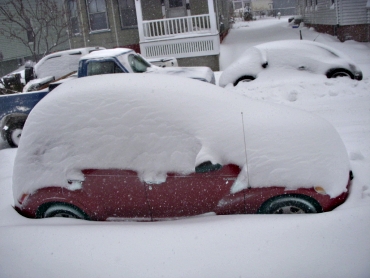 I was lucky. A city snow plow came through my block but only pushed snow to the other side of the street. Look at this poor guy's car: 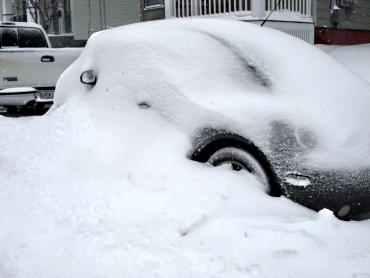 One of the things I've learned about clearing cars and sidewalks and driveways is that there seems to be an unwritten rule that whoever gets there first with the shovel or snow blower gets to push the snow onto someone else's car or sidewalk. Of course, your neighbor who waits until later might return the favor and then you're back to square one. What a mess the block was. 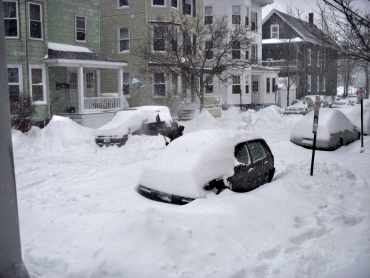 It's important to get the driveway cleared on big-time snow days because the city calls a parking ban to be able to plow the streets. No street parking between 10PM and 6AM. At my apartment house, we cram three cars into our driveway. Here is my best winter friend, Jerry, with his snow blower in the back of our driveway. 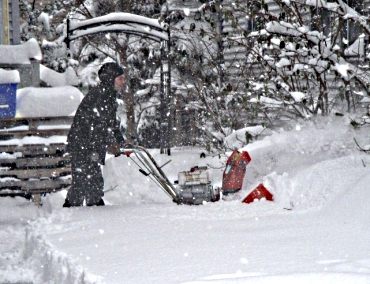 I brushed the snow off my car and Jerry dug out more than a foot of it all around so that I could get past the first obstacle – opening the door; snow had been piled above the door handle. Jerry, as always, did a terrific job with the snow blower so driving into the parking area was easy. 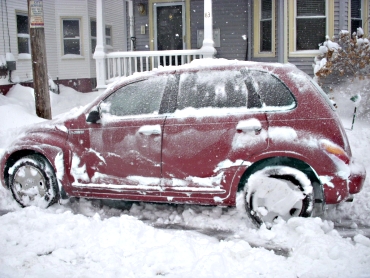 If you think you detect a tone of annoyance in this post, you're not wrong. In three-and-a-half winters (there will undoubtedly be more white stuff this year), whatever enchantment I once felt when Mother Nature transforms the landscape in this way has left me.

There was a time – all the 40 years I spent in New York City – when huge snow storms delighted me. I liked to be outside before anyone else - even in the dark - so I could make the first footprints. The last winter I lived there, the city had the biggest snowstorm in its entire history of record-keeping. Greenwich Village was a wonderland.

This was my backyard during the storm. It was a glorious winter storm. Here is my story about it. I doubt I'll ever enjoy a snow storm again as much as the Blizzard of '06.

At The Elder Storytelling Place today, Lyn Burnstine: The Best Advice I Ever Had and Followed

Ronni, that is definitely a lot of snow. It is hard for someone who lives in Paris, to imagine anything like that. Snow will hardly stick around a few days here... I can understand how one would rapidly get annoyed! I don't even own proper shoes to walk in the snow and avoid going out when it snows. Take courage!

I continue to find something magical about a substantial snowstorm. The magic and beauty ends, however, once it’s time to dig out the driveway only to have the plows return the favor. Your pictures are great and the ones taken in NYC even greater. Thanks for sharing.

I left my parents' home in Buffalo in 1965 -- and for the next 38 years, my mother faithfully sent me those pictures at least once every winter.

After 30+ years in New England, I still love the snow storms, when it's all snow--but all too often here in Massachusetts we get the dreaded "wintry mix" where snow + rain + freezing rain = lots of slop.

But I hear you about the hassle of clean-up after the storm.

Actually, we haven't had much snow this winter -- yet!!!! I'm waiting for another bad storm -- winter came late to Ohio this year and I'm guessing that we'll get buried again -- probably on my birthday in April. Sigh.

Anyone who has read my thoughts on snow know that I hate being out in it. I love being warm and just looking at the pictures makes me cold.

While I see the beauty of a lovely white snowfall, I remember the downside and am glad that I live in Arizona.

Ronnie,
Greetings from balmy, beautiful, overcast (so what!) downtown Portland, Oregon. We had four inches of snow one afternoon last month and of course, the great public transportation system here couldn't cope for one afternoon. Most of the snow was gone the next day and that reinforced my ever grateful thought that I no longer live in New York City or Connecticut where nature is meaner than in the beautiful northwest.
Cheers,
Warren

I have been so thankful that we haven't had any yet this year, but typically, if we get snow it is in Feb. I still hope it passes us by this year.

It's nice to be in an apartment and let someone else do the shoveling and plowing. I remember a couple of times when we were in a house that I shoveled out the driveway only to see a snowplow heading my way. I stood at the foot of the drive and just stared at the driver who had to move to the center of the street to avoid knocking me down.

Thanks but no thanks. Spent the first half of my life in Michigan shoveling snow, slipping on roads, getting stuck in snowbanks and other "fun" adventures with huge snow-falls. Now I live in the Upper South and have just enough snow, on occasion, to appreciate its beauty. Usually by the next day it has melted. But it is Mother Earth's way to create huge snow storms -- a necessary part of nature. --barbara

Having escaped Iowa just in time to miss all the snow and ice, I'm reveling in 80 deg weather in Mission, TX. They call folks like me "Winter Texans" in these parts, m'am. But thanks, Ronni, for the photos. I can picture my daughter struggling with that very snow in Portland. Of course, she's young and skis and loves it!
PS I'm a PT owner, too.

Hey Warren!...much of the "gridlock" traffic in Portland Oregon was caused by thousands leaving work early as soon as they saw snowflakes out the window...Be fair & tell all of the story..Yes! TriMet is slow to learn anything but don't deserve the whole blame...