I was watching Key Largo recently and thought, “There was a song about this film.” I wondered if there were more films that had songs written about them. So that set my wombat brain going (that’s the Australian equivalent of a little bear brain) to see what I could come up with.

To make it more of a challenge, I excluded film scores and songs that have appeared in films. I had to compromise a little. If I stuck strictly to “songs about films” I think I could manage two so there was a little stretching of the criterion for selection.

The first film to consider is Touch of Evil. This was made by Orson Welles. I saw it recently and realised that it’s a very ordinary film. I know that film buffs love it but it left me cold. I am saddened by that as it was made less than a decade after Orson appeared in the best film ever, The Third Man. And it wasn’t too long before that film that he made Citizen Kane.

Anyway, it produced a really good song called Touch of Evil by Tom Russell from his fine album, “Borderland.”

The gentleman on the right with the moustache is Charlton Heston.

Tom is not only a fine singer and excellent songwriter, he also writes a terrific blog. When I read his pieces I think I should give this away. Fortunately, he doesn’t write very often so I get over it. Perhaps I shouldn’t say that as you’ll all be heading over there instead.

Here’s Tom with the song.

I don’t know if Gene Pitney’s version of The Man Who Shot Liberty Valance was meant to be the theme for that film or not, but it certainly sounds like it should have been. It really conforms to movie themes, mainly westerns, from the fifties and sixties. That is, it gives away the plot.

There are films where you can go along just for the opening credits (and theme) and then leave as you know all about it (I’m thinking of you, High Noon, amongst others). This isn’t the case here as it wasn’t used in the film (but that’s the basis of this blog post, after all).

This was one of John Wayne’s best efforts (not forgetting James Stewart and Lee Marvin, marvelously nasty as Liberty).

Rio Bravo comes close to being my favorite western, yet another with John Wayne. Well, he was good at those. Not much chop in anything else though.

In this case, we have a singer who actually appeared in the film – Ricky Nelson. The song he sings didn’t. It’s called Restless Kid and was written by Johnny Cash. This is quite obvious when you listen to it; you can imagine Johnny singing it. This song is sung from the point of view of Colorado, the character Ricky played.

I think Bonnie and Clyde was the first of the run of great films made in the seventies. I know, it came out in the mid-sixties, but it looks as if it fits with those from ten years later. This was the first time that Faye Dunaway had impinged on my consciousness. I had seen Warren Beatty before but this one showed that he was more than just a pretty face. It may also have been the first time I noticed Gene Hackman.

Georgie Fame had a hit around that time with The Ballad of Bonnie and Clyde. I don’t know if this was about the real Bonnie and Clyde or the film, but I’m going to give it the benefit of the doubt so I can include it. 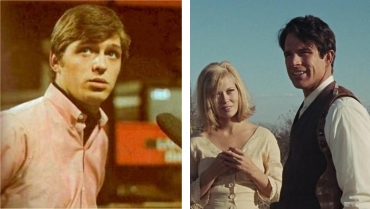 Georgie went on to become a really fine singer and keyboard player in jazz and R&B. He’s still playing well, better than ever, really. He occasionally appears with Van Morrison. There are few better doubles than that.

♫ Georgie Fame - The Ballad of Bonnie and Clyde

The Bruce Springsteen song Nebraska is not, strictly speaking, about the film Badlands. It’s actually sung from the point of view of the Martin Sheen character from that film. 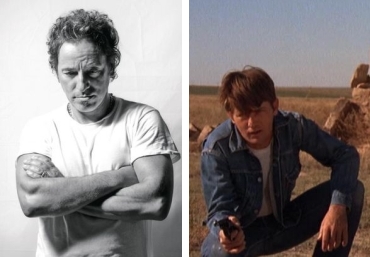 I won’t say much about Badlands because I’ve pretty much forgotten it. I saw it when it was released and haven’t seen it since. I suppose I could hire the DVD and check it out but I’m not all that interested. I’ll just go with Bruce singing the song. More to my liking.

Returning to the one that started my train of thought, Key Largo. Entertaining flick with Bogey and Bacall. Also Lionel Barrymore and Eddie Robinson (playing yet another mobster). The song was also called Key Largo and it was recorded by Bertie Higgins. 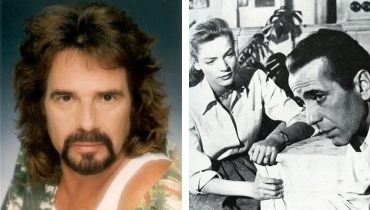 I knew I had the tune in my collection somewhere but I hadn’t thought about it for years, let alone played it. I eventually found it. I must admit I know little about Bertie - his name was about it - and he was yet another of the one-hit wonders from the eighties (sorry Bertie). That being said, I rather like it. It’s also one of those songs that sticks in the brain. You have been warned.

This is an excellent post. I read it on a regular basis. The music is especially good. When I hit on the music bar it comes up on my mics so clear and void of stops and starts. Don't know how you make it so smooth -- wish youtube could get their music to come across like yours. -- barbara

Peter, what a truly unique music game. The only song that I can think of that fits the challenge is "The Mighty Quinn" by Bob Dylan, supposedly written after he saw Anthony Quinn in The Savage Innocents.

I have to echo Barbara's comments. These songs here are so easy to play and sound crystal clear. All essays and books about music should have such musical annotation.

Springsteen named "Thunder Road," perhaps his greatest song, after seeing a poster for the Robert Mitchum movie of the same name.

How about Edward G. Robinson's bathtub scene in Key Largo? He is pure malevolence in that film.

I'm with you on Touch of Evil.

I just loved listening to my past and some of the best music ever...

Ah, now you all tell me about films/songs I forgot. Oh well.
I agree with you K about Eddie’s performance. The rest of the cast acquitted themselves really well too. I was a little hesitant about watching "Key Largo" (it was just after I saw "Touch of Evil") but it held up splendidly.
With Bruce, I like his early funny ones (to borrow a film quote), especially "4th of July, Asbury Park". That’d be my pick.

My thoughts are of Alex Chilton....Did you listen to him...Being from Memphis, we are sad here...

Hey, I've got one for you: David Gates of the band, "Bread" wrote a song called "Aubrey" after watching "Breakfast at Tiffany's".

Though it was a not exactly a tribute to Audrey Hepburn, still her movie role inspired the song:

And Aubrey was her name,
A not so very ordinary girl or name.
But who's to blame?
For a love that wouldn't bloom
For the hearts that never played in tune.
Like a lovely melody that everyone can sing,
Take away the words that rhyme it doesn't mean a thing.

I adore your weekly additions to TGB.

Thanks Pattie. You make me blush.

I'm bringing up the rear here (I've been to the beach for a week) and I'm just now getting to my Sunday listening fix. This was super especially finding the Bertie Higgins "Key Largo" song. My brother kept playing this song at a family gathering and repeating that it was his favorite. He said in the unlikely event he should ever pass away, he would like that song played but I wasn't familiar with the tune and later, I could not remember what it was...but that's IT! KEY LARGO! I'm going right over to Amazon and buying the MP3 so I have it. I had made a little music memorial (YouTube cilesfineline Requiem for Dene ) It is comprised of pictures of our sister's Memorial last year to a a Warren Zevon song. I think he would like something like that too. That was the sense I got when he was playing this song over and over again for us all to listen to! Later I was wracking my brains trying to remember details of it! I'm so happy I found the song! Thanks Peter! Of course the whole column is great, as always! :-D