ELDER MUSIC: More Money for You and Me

The Four Preps had a number of hits in the Fifties. I especially remember 26 Miles and Big Man with fondness. 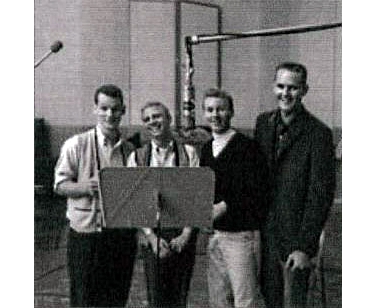 The four were students at Hollywood High School and were signed to a recording contract by Capitol Records after one of Capitol's executives saw them at a talent show at that school in 1956. Boy, if that’s not the basis of a film I don’t know what is.

Besides being particularly fine ballad singers, they were also fine mimics and had a couple of hits imitating other groups. This is one of them: More Money For You and Me.

♫ Four Preps - More Money for You and Me

Naturally, I’m going to feature the songs they send up in that song. 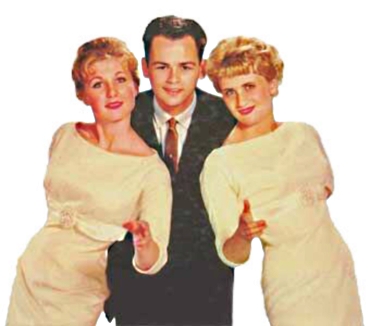 When they were signed to a record company and ready to record, a record exec said, “Can’t have that sort of thing.” Over The Fleetwoods’ strenuous objections, the exec prevailed. They did record some songs in their original format but these were relegated to albums. The singles featured Gary as lead.

In spite of that they released a number of fine songs – Come Softly To Me, The Great Imposter, Graduation’s Here and the song featured here today, Mr Blue.

The Hollywood Argyles were typical one-hit wonders, at least around my neck of the woods. It seems they needed a name for their group, so as the recording studio was on the corner of Hollywood Boulevard and Argyle Street, that was it. I suppose it could have been worse, they might have chosen the name “Boulevard Street.” 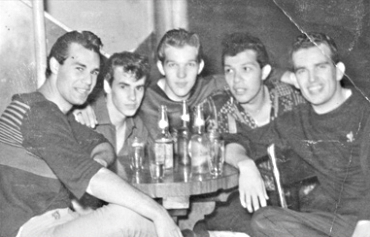 Alley Oop seemed to us to be a typical senseless novelty song because we didn’t have the cartoon strip in our papers. It was probably a novelty song even for those who did have it.

It’s not even a very entertaining novelty song, unlike Purple People Eater, Witch Doctor and quite a few others. However, it was in the Preps’ song, so here it is.

Ah, now we have a fine group, The Platters. 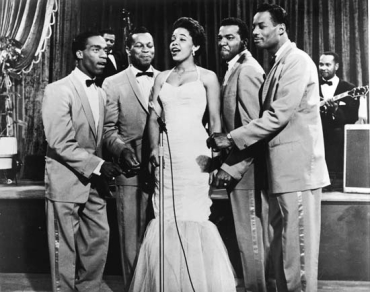 The Platters were unusual for the time as they set themselves up as a legal entity with each member having an equal share. However, whenever a member left, their manager, Buck Ram, bought out that share and eventually it meant that he had complete control of the group and, especially, its name. For a long time he would have several different groups touring as The Platters, often at the same time.

Back in the fifties though, for a while they had a stable group that gave us a string of hits that were among the best of the era: Only You, The Great Pretender, My Prayer, Twilight Time and lots more. It also included the track the Preps sang, Smoke Gets in Your Eyes.

♫ The Platters - Smoke Gets in Your Eyes

The only track I didn’t have in my collection is In This Whole Wide World by The Four Freshmen. 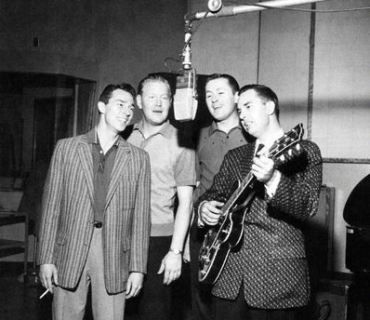 The Four Freshmen started singing together in 1948, and they are still singing today. Not the originals, though. By my count there have been 22 of them. I may have missed some. That sure beats George Washington’s axe. They have always been more jazz oriented than anything else, but they could sing pop with the best of them.

Here is a live version of the song I found courtesy of Doctor Google. I don’t know which of the 22 are in the group.

The Kingston Trio get two songs mentioned but we’re running a bit short so I’ll only use one of them.

The original line up of the Kingston Trio was Dave Guard, Bob Shane and Nick Reynolds. However, when they first started, the group was rather fluid and as many as seven or eight could be on stage together. The others eventually fell by the wayside leaving the trio.

They probably were more instrumental in instigating the folk boom of the late Fifties, early Sixties than any other group. Folkier-than-thou types castigated them for not being pure folk singers but they claimed that wasn’t what they were doing.

The Preps songs were A Worried Man and Tom Dooley, The Kinston Trio's most famous song. That’s the one you’ll be hearing today.

While checking the photos for Dion and the Belmonts, I noticed that there seems to be somewhere between two and five Belmonts. Maybe it was who was around at the time or who was out of jail (just kidding, Belmonts, I’m going on what the Preps sang). 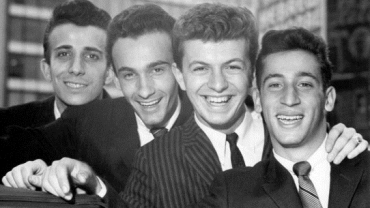 Once they were sort of successful, they went on various tours around your country, as most of the early rock 'n' rollers did. One of these was the "Winter Dance Party" tour with Buddy Holly, Ritchie Valens and The Big Bopper. Dion took the clapped-out bus rather than flying that night in February 1959, because he could not afford the $36 for the flight. The promoters couldn’t have paid him much, but in this case, that probably worked out okay for him.

The group’s next song was A Teenager in Love.

♫ Dion & the Belmonts - A Teenager in Love

What a great trip down music memory lane. I was in high school when Dion took the bus and Buddy and Richie flew. This is a really great post.

A lot of great stuff here!!!! I was 11 when that plane crash occured and was so sad.

Probably my favorite Kingston Trio song was "Scotch and Soda".

LOVED the Four Preps song. It meshed nicely with my http://www.funnytheworld.com/2010/Apr/11.htm>journal entry for April 11 and I am linking to it in the entry for the 12th (not yet written)

Oops. I got the link wrong in that last comment (sorry I wasn't able to just edit it). The link is http://www.funnytheworld.com/2010/Apr/11.htm

Thoroughly enjoyed listening to these and remembering being a tiny lass watching and worshiping my big sister listening to the radio and humming along...sweet memories. Thank you, Peter.

Well Peter, another unique essay about music. I like to read your post while playing the songs. Usually the songs run longer than your story, so I go on listening to them while reading the New York Times online. Great way to start Sunday Mornngs.

I've been looking at your older posts. You did one about TV theme songs. Have you ever considered an overview of spy movie soundtracks? That's a favorite sub-sub-genre of mine. James Bond, Man From U.N.C.L.E., Our Man Flint, Ipcress File, etc.

I remember playing "Smoke Gets In Your Eyes' on the piano when I was about 12 years old. That would have been 1937. I think it's older than most of the singers that you featured. I still remember the words, so it must have really impressed this young dreamer.

You give us more than a musical trip down memory lane, Peter. Thank you. I love to see what the singers are wearing in the photos as I can remember wearing similar clothes in my teens. Those dresses worn by Gretchen and Barbara of The Fleetwoods are so feminine. More music, and hot fashion, please.

Absolutely fascinating. Thank you so much.

'Scotch and Soda' - yes, Kay, I love that one too, especially with Dave Guard's fuzzy teddy-bear voice!

Hi Norma,the A.M.; 'Scotch and Soda"
was Bob Shane's signature song.One of
my favorites too. I think he sang it
solo. I believe the writer is still
unknown.