Whenever the term singer/songwriters is bandied about, it’s usually either in the context of the early, mid-sixties with people like Bob Dylan, Tom Paxton, Eric Andersen and the like or the early seventies with James Taylor, Joni Mitchell and Jackson Browne.

No one seems to recognize earlier singer/songwriters, well not as singer/songwriters. I guess they were also around centuries ago, then called troubadours, but I’m restricting myself to recorded music as that’s all I have to demonstrate this. No conjuring up a passing troubadour to visit you all, whip out his lute and give you a biting song about Henry the Eighth (actually, old Henry was a pretty dab hand at the songwriting caper himself).

I’ll start with Robert Johnson who, legend has it, went down to the crossroad and made a pact with the devil to make him a great guitar player. I think there’s a much more prosaic story – practice, and more practice - but that’s pretty boring and legends usually win out over truth.

He recorded only about 40 songs in his lifetime that was cut short by being shot, poisoned, stabbed, bludgeoned or given the evil eye – take your pick. Once again, legend comes in to play. There is a definitive answer but I won’t bore you with it. 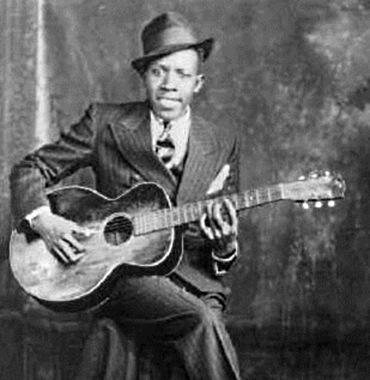 Robert was a major influence on the blues/rock 'n' roll performers of the sixties and seventies and many recorded his songs. Here is one of them – Love in Vain.

Jimmie Rodgers was a white man who could sing the blues long before that was fashionable. He could also yodel. He often did them both in the same song, usually called Blue Yodel Number (Something or Other) – it saves the boring task of thinking of titles I suppose. 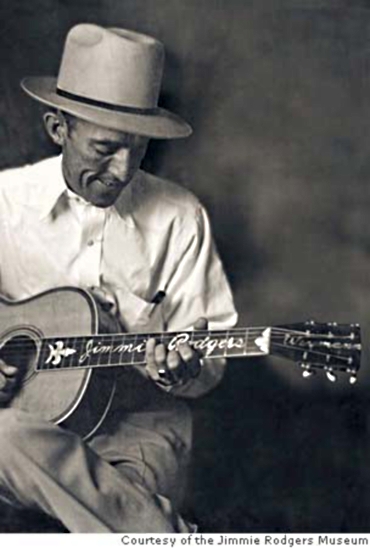 Jimmie had already hit the road by the time he was 13, working on the railways as a waterboy. Various rail-workers and hobos taught him to play the guitar. Eventually he became a brakeman for the New Orleans and Northeastern Railroad and the “Singing Brakeman” was born.

Unfortunately, he contracted tuberculosis at the age of 27 that cost him his job (and eventually his life). He turned to the entertainment industry and recorded songs for the Victor Talking Machine Company (what a cool name that is).

He toured with Will Rodgers and recorded with Louis Armstrong but wasn’t a major star in his lifetime. Since his death he has been recognized as one of the most influential performers of the century.

This is Jimmie singing Any Old Time, a song covered so wonderfully by Maria Muldaur in her first solo album (without the yodeling).

Around about the same time, Woody Guthrie was writing, singing, traveling and organizing workers. 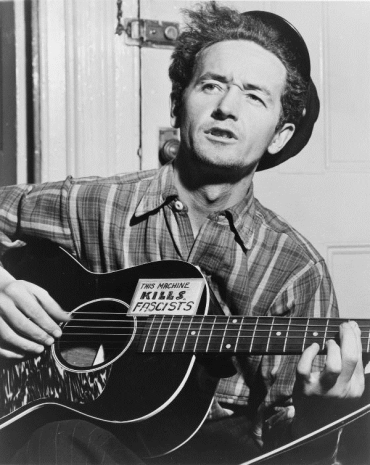 Woody was born in Okemah, a small town in Okfuskee County, Oklahoma. I mention that only because they are such wonderful names.

Woody started busking on the streets in Oklahoma, and later Texas, as a boy playing the harmonica and guitar. He would also regularly play at dances organized by his uncle.

With the advent of the Dust Bowl era, he made his way to California in the company of Okies and folks from Texas (Texies?). He used their stories as the basis of many of his songs.

Later in New York (I’m skipping over a lot here) he hung around with Huddie Ledbetter, Pete Seeger and other like-minded singers. With Pete, Lee Hays, Josh White and others he formed the Almanac Singers who recorded a bunch of songs, mainly leftist in their subject matter.

He was the godfather of the folk boom in the early sixties (although he’d eschew that title). Woody died from complications of Huntington's disease, a progressive genetic neurological disorder.

Hank Williams was one of the most influential songwriters of the 20th century. There is no way anyone could list all the artists who have recorded his songs. 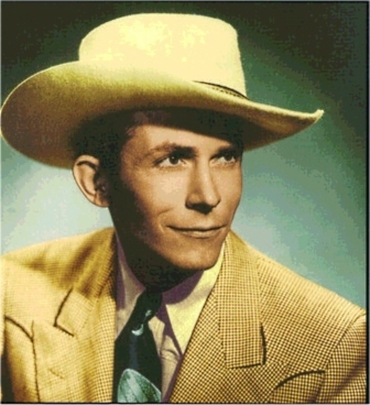 Hank was born in a log cabin in Alabama (really) and his mum knew him as Hiram. No wonder he called himself Hank. He was born with a mild, undiagnosed case of spina bifida occulta which gave him lifelong pain – a factor in his later abuse of alcohol and drugs that he used for self-medication.

When he was 14, Hank would sing and play guitar outside a local radio station in Montgomery. Not altogether surprisingly, he caught the eye (and ear) of the producers and they occasionally invited him to play on air. So many listeners contacted the station that he was hired to do his own program and Hank was away.

He started his own band (The Drifting Cowboys), dropped out of school and started performing full time. His mum stepped in to manage the band. There followed lots of great songs, booze, drugs, marriages and divorces, and death at the age of 29. 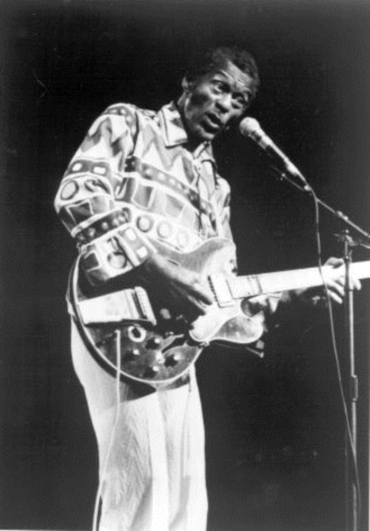 Chuck started out singing in the style of Charles Brown and a little bit of Nat King Cole until he joined a band run by pianist Johnny Johnson and pretty much took it over. He borrowed both guitar riffs and grandstanding techniques from T-Bone Walker, started writing his own songs and music hasn’t been the same since.

When in Chicago in 1955, he met Muddy Waters who suggested he contact Leonard Chess of Chess Records who signed him pretty much on the spot. Unlike most of the rock 'n' roll songs of the time, Chuck’s lyrics were literate and often witty and had things to say away from the usual topics these songs usually covered.

He remained with Chess for about 11 years where he recorded all his famous songs. This is just one of them (and it’s pretty much record roulette trying decide which one), You Never Can Tell.

♫ Chuck Berry - You Never Can Tell

Buddy Holly was the inspiration for bands in the following decade – that’s the sixties if you’re trying to keep track. His band was self-contained, they wrote their own songs, produced and recorded their own music. The Beatles pretty much emulated Buddy’s example. 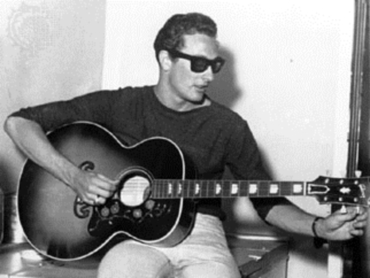 Buddy wrote most of the songs he recorded, although he wasn’t always credited. Often his manager and record producer would be on the records as writer or co-writer. The same thing happened to Chuck (and a few others).

In the last months of his life, Buddy was at home writing songs and recording them with just an acoustic guitar as demonstration pieces. This is one of them, Peggy Sue Got Married.

We just saw Suzanne Vega at our wonderful Stone Mountain Arts Center. She is one of the best singer songwriters performing, she was amazing.

Amazing post today! I so enjoyed my serenade, especially listening to Buddy Holly on that last song. And I guess these posts make you a troubadour, too.

Currently listening to Tim Akers & The Smoking Section. Check them out on Tower of Power's "What Is Hip?" at http://www.youtube.com/watch?v=OWuAkrYN5Sg

I so look forward to my music lesson every Sunday. Boo Hoo! It's over...now I have to get ready for work
:-( Thanks for getting me going today, Peter!

Robert Johnson and Hank Williams are two of the greatest songwriters ever. Thanks for calling them out.

You might be interested in a book by Jimmie N. Rogers, "Country Music Lyrics Revisited." (not the singer above.) I notice it's available through Australian National Library in addition to Internet commercial sources.