GAY AND GRAY: An Elder Hero for Gay Humanity

In this month of Gay Pride celebrations, it seems good to raise up the story of a valued acquaintance, an unlikely hero in the international struggle for LGBT human rights who happens to be an elder.

Retired Ugandan Bishop Christopher Senyonjo, 78, is a married, straight man. For 34 years he served the Anglican Church in West Buganda diligently, but without attracting particular attention. In 1998, he left office, but stayed active, starting a family counseling center in Kampala, the capital. He anticipated a quiet life. 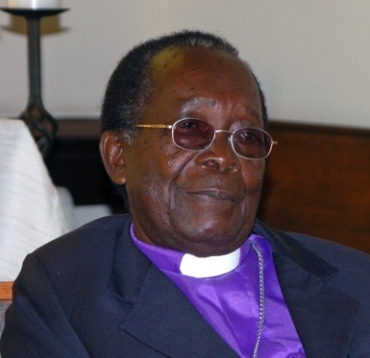 Recently he visited the United States and explained what actually ensued to a reporter who wrote:

”In 2001, his life changed forever when he met several gay and lesbian young people who had been rejected by their churches. 'They had lost jobs and been expelled from school. Some of them were on the verge of committing suicide.'

“Senyonjo gave them a radical message for their time and place: 'If you are gay or lesbian, God made you and loves you that way, and you should accept yourselves.'

“Once word of his compassionate advice reached his successors in the Anglican hierarchy in Uganda, there was a firestorm. Senyonjo was asked to 'condemn' the people under his care 'and convert them to something else.' Senyonjo said he would not. 'I cannot see God where there is no love,' he said, 'I would rather go with the truth.'

“In reaction, he was expelled from the church he had served for 34 years. More significantly for his own survival, the church stripped him of his pension. 'The cost has been great,' Senyonjo said of his post-retirement ministry. 'It is by the grace of God that I have been able to survive. By the strength of God I have been able to stand.'"

”Africa is becoming Stage Two of the American political and religious culture wars, a theater for religious imperialists to accomplish overseas what cannot be accomplished at home - like denying women ordination to ministry and putting LGBT people back in closets.

For the last two decades, right-wing Christians have been tromping all over Africa trying to appropriate native African experiential faith for their western theological agenda - making Africa a wedge issue - and African Christians spiritual pawns - in their seemingly endless quest to grasp theological power.

So today, gay Ugandans are denounced as Western decadents by their President. They are threatened with a new law that would, under some circumstances, call for the death penalty for homosexual conduct or rights advocacy.

LGBT people world wide have called on their governments to speak out against the planned legislation. Secretary of State Hillary Clinton and President Obama have both joined the chorus of protest.

Several times over the last few years, I've had the opportunity to spend time with Bishop Christopher, most recently in May when I volunteered to drive him to some of his appointments in my city. A more gentle, unassuming man of the cloth would be hard to imagine.

This is a person who saw an injustice and felt called to speak out against it, accepting with equanimity and humor the rejection and privation he has suffered in consequence.

At The Elder Storytelling Place today, Richard J. Klade: The Penguins are Gone

Our small town Episcopal church split over the gay issue. The Anglicans took over the church building while the Episcopalians moved on to a new building. The later sued, and the group that began the split is being forced out.

Having been raised an Episcopalian, I am left crying "what happened to tolerance and love thy neighbor" in this once most liberal of churches.

Thanks so much for sharing this story. I need all the examples of courage I can get.

The World community needs to loudly speak out against this injustice.

Intolerance seems to be the hallmark of right wing evangelical Christians. They are so narrow minded and so quick to judge that one wonders if they understand the Bible at all. Their ignorant meddling causes so much damage. None are so blind as those who cannot see.

Attitudes are changing for the better every day in regard to Gay and Lesbian issues.

I picked up the Philadelphia Inquirer on Sunday and began to read a usually conservative columnist's column.

I was amazed that he put forth a very sympathetic argument for same sex marriage.

If you would be interested in reading it please go to www.michaelsmerconish.com and choose the site that refers to the Philadelphia Inquirer. The article that he wrote will appear for you.

Things are looking up!

@Nancy: it's so true that, gradually, fitfully, acceptance of LGBT people is coming. I feel lucky to live in this happy time.

I've never understood why many right-wing folks who call themselves Christians act in so many ways that are decidedly un-Christlike. They interpret the Bible highly selectively, it seems to me--accepting the parts that reinforce their views and rejecting those that don't.

I've also never understood why other peoples' sexual identity is of such grave concern to the right-wing crowd. They can choose not to associate with gay people (it's a free country) but whatever happened to that do-unto-others thing?

Fifty years ago these were the people standing on the schoolhouse steps shouting racial slurs. By and large these are also the people who would deny women the right to a legal abortion and the terminally ill the right to have some control over when and how they will depart this world. Yet, assassinating the few remaining doctors who are willing to risk performing abortions is O.K.!

In my view right-wing evangelicals are potentially as dangerous as radical Islamists--they're both extremist groups. The right-wingers' battle against gay people is only one aspect of a long war they've been fighting against the rest of us for my entire lifetime--and before. We just need to keep fighting back.

People are changing their minds in this country. Anti-gay sentiment is now unpopular among groups who used to rather freely express their contempt for homosexuals.
The situation in Africa is maddening, though. Not able to keep people in ignorance here, Evangelicals and right wing Catholics are giving it a try in Africa, buying off political leaders and clergy.
A friend of mine saw her Episcopal diocese split in half over the issue of ordination of women and the recognition of gay marriage. She was blindsided, not thinking this could possibly become an issue among the supposedly enlighted Episcopalians.
This is an excellent and illuminating post. Thank you.