Yesterday, I learned that Nancy Belle died unexpectedly last Thursday, 17 June. Many of you may know her. She commented here from time to time and she blogged at The Tempered Optimist. Almost exactly a year ago, she wrote a guest blog for Time Goes By about turning age 65. She started out like this:

“I reach a turning point at the end of May. I will turn 65. I believe I am not defined by a number. But I have learned now I am.

“I also believe I am the total of life experiences have made me who I am today: someone who loves to have fun; someone who can be brutally honest; someone who has no tolerance for game players or hypocrites; someone who sometimes is impatient, silent, reflective yet personable and very intuitive.

“These characteristics were always within me but some became more prominent as I aged. So my first lesson is that you are who you are - formed at early age.”

Nancy's description is spot on; she knew herself well, she never pulled her punches, most especially about herself.

We “met” sometime in 2007, when she was working with Erickson Retirement Homes and sought my help in starting a blog for the company. Soon thereafter, she invited me to tour one of the Erickson communities in Illinois, so we then met in person and got to spend part of day together. She was funny, smart, thoughtful, passionate and full of life.

On 15 April, 2009, Nancy became a victim of the recession when she and many others at Erickson were laid off after many years of service. Not one to waste time, she had her personal blog up and running four days later and wrote this on the first day, proving her “tempered optimist” credentials:

“I begin a new at an interesting point in my life. I had thought I would retire in at least 3 years so I could get the maximum benefit from Social Security since my 401K is so down from what it was. But I got a small severance and some accrued vacation time. And there is always unemployment!

“Though it will be difficult, I have decided to take some time for me and think things over. You know the old saying: I don't know what I want to be when I grow up? I think this is true at any age. Maybe there is a pot of gold at the end of this rainbow.”

Nancy always jumped feet first into whatever she cared greatly about. During the health care reform debate last year, she joined several other elderbloggers in a conference call with Senator Harry Reid's office, and I remember the impassioned plea she made for bone density screenings to be included in the free preventive care for Medicare members. I don't know if it was due to Nancy or not, but a few hours later, we received a note from the Senator's office that it had been included in the draft bill.

Here is a photo of Nancy in her office at Erickson. In recent months, she had been tweeting and using Facebook more than blogging. 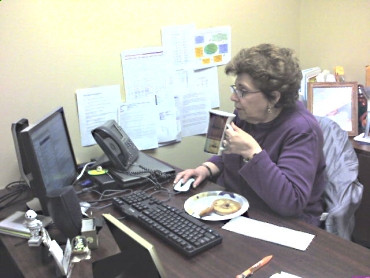 Nancy's funeral was held on Sunday at Sol Levinson & Bros. in Baltimore. You can sign the memorial guest book for her family here and listen to the service here.

Nancy, who usually signed herself NancyB online, titled her TGB guest post, On Turning 65 - Lessons Learned. As happened so often with Nancy, her lessons were as funny as they were useful. Here is one:

“Don’t spend too much energy on people or things that upset you. My friend Jan used to say to me, 'those people are trees.'

“So, when someone or something gets me really angry, that thing or person becomes a tree. They are part of the environment, you know they’re there but it’s up to a mightier power to take care of them, not me. Sometimes I give them tree names - and sometimes, just before I let go, I envision a dog coming by and urinating on that tree.”

Funny, but hardly a way to end a memorial post. So here is how Nancy ended the inaugural post on her personal blog:

“Over the next few blogs, I will write of my experiences, my plan, and my outlook. I title the blog the tempered optimist because that is who I am. I like to think that I look at things from the best side, not the worst; yet I am tempered by life's experiences so that I do not always see only the rosy side of life.

“I choose to be realistic but with a positive twist. Does that make sense? Who knows? But this is the start of a new journey.”

At The Elder Storytelling Place today, D. Sugar: The Woman Who Inspired Me

Thanks for posting this, Ronnie. Her passions will be missed.

Your tribute to Nancy Belle is so moving. I did not know of her blog and am sorry that I missed it. It obviously was well worth following.

Thank you for notifying your followers of her untimely death. The blogging world has lost the talents of a wise woman.

Ronni, you touch me deeply in remembering one of us. Without Nancy's blog and yours and mine and those of the TGB community... we would miss the varieties of riches, wonders, struggles, solutions, questions, allies, and friends available a few clicks away. Nancy's multiple acts surely did rock, and I plan to follow the links you shared on her acts and her actions. I'll miss her, thanks to your introducing me/us through your beautiful memorial.

Having known Nancy personally and professionally, I feel her loss deeply. But she would tell me to get off my a** and do something productive and life-changing. That's her legacy--be passionate, be true, be fierce.

Thank you for celebrating one of the best human beings I've ever known.

May Nancy's memory be for a blessing to those of us who "met" her on our journey through life. RIP

Missing the only other blogger in my sphere who admits to watching American Idol and Biggest Loser.
a/b

She will be missed -- her tempered optimism was an inspiration to me.

I loved this post, Ronni. Isn't it a treat that you got to meet her. She inspires me right now.

It makes me pause when I read about a woman who has gone unexpectedly. There was a funeral for a woman in our village recently as well. It is sad when we lose a good one, a woman who has touched our lives a little. That was a very nice tribute.

What a lovely tribute. We may not all know each other, but there is such a sense of community here. You have created something very special, Ronni.

Your tribute to a lovely woman is warm and special like Nancy. The fact that you met her in person now means even more, doesn't it? Nancy was a good example for all of us.

Ah, Nancy was a wonder and touched many lives personally with her wit, her wisdom, and her determination to be honest. She was indeed passionate and fearless, and I miss her deeply. Thank you for posting in her memory.