Almost exactly four years ago, I showed you my then-new morning walk along Casco Bay in Portland, Maine.

Now, five weeks after having moved into my new home near Portland, Oregon, I have another new morning walk, this one in a city park next to the neighborhood where I live in Lake Oswego.

When I walk, in the early morning between about 6AM and 7AM, hardly anyone else it out and I have long stretches like this to myself. 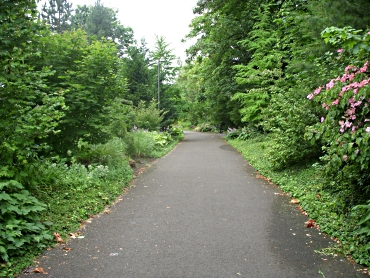 That pink flowering tree on the right is at its peak now, maybe a couple of more weeks before all the blossoms are gone. 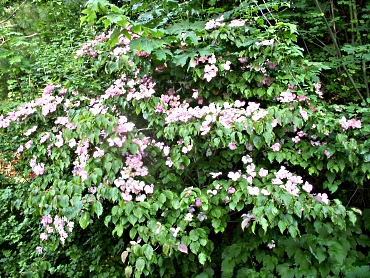 In another section of my walk are a lot of what might be blueberry bushes. But I remember blueberries that grew at the country house I once had in upstate New York as dangling on longer stems than the ones in the this photo and having quite different leaves. Maybe these are Oregon-style blueberries or, maybe, they are just berries of some kind that happen to be blue. 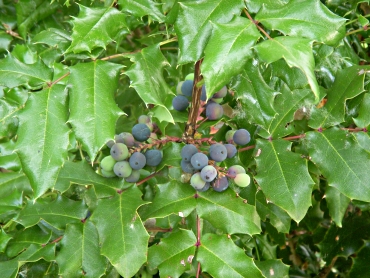 When I was a kid growing up here, there were lots of drinking fountains in downtown Portland. Unless I am misremembering, there appear not to be so many now, but this one, along a park path is similar in style, set among a couple of slabs of rock for walkers to rest if they need or want. 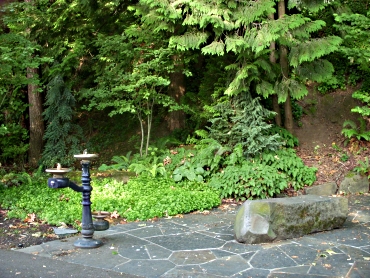 At the beginning of my walk is a gathering area with an an amphitheater (I'll be attending a free R&B concert there tomorrow evening) and a large lawn. At the top of the area is a picnic pavilion and this being Oregon - famed for the amount of its rain - of course, the pavilion is covered. 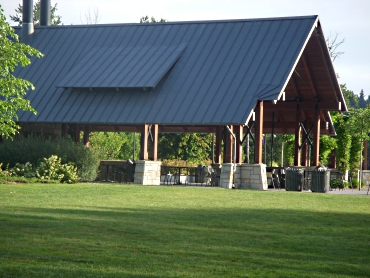 On the other side of the covered pavilion are tables and chairs for dryer days along a shallow reflecting pool. 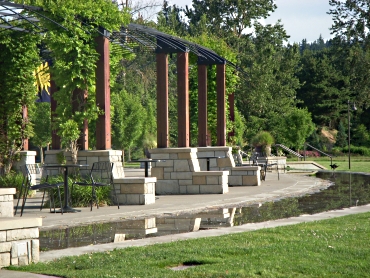 Nearby is a sort of tent over a jetty that is built out into the river. I'm sure there is name for this shape and I'm sure there is something mathematical to be said about it too, but that's not my area of expertise; I just think it's interesting to look at. 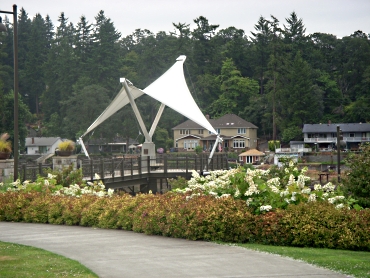 The river is the Willamette – the one that a little farther north divides the city of Portland east and west and eventually flows into the mighty Columbia River. This is the Sellwood Bridge I can see on my walk, the southernmost of Portland's many bridges. 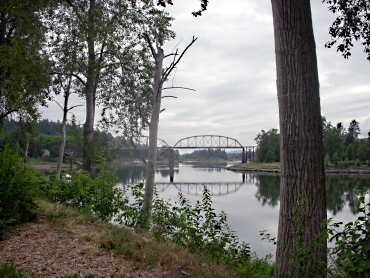 There is remarkable number of plaques, rocks and stelae in the park that are commemorative or inspirational. In one end are these pillars that remind me of a small Stonehenge although the arrangement is wrong and there are not cross pieces at the top of the pillars. Here they are in the early morning sunlight with the Sellwood Bridge in the background. 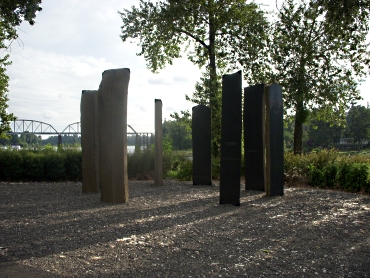 Each of the stelae contains a quotation from someone whose name I don't remember. If you're interested, I'll write it down next time. Here are a couple of them: 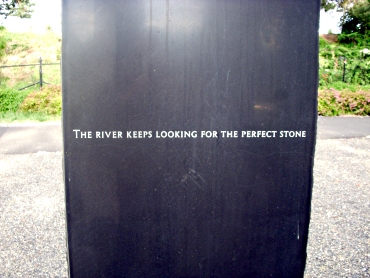 There are more, but you get the idea.

One morning, not much after dawn, I came across these rowers practicing on the river. The guy in the motorboat on the left set the pace - “Pull. Pull. Pull” - while matching their speed. (Sometime I'll tell you about the Portland dragon boat races.) 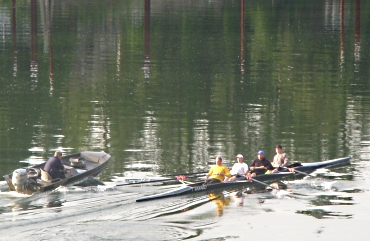 Because I walk so early, most of the wildlife isn't awake yet, but yesterday I had a nice little nostalgia trip when I saw these ducks on the river. Not more than a mile from here, when I was a little girl, my mother would take me down to the lake (not this river) to feed the ducks there that looked just like these.

The ducks are a nice touch - like a "welcome home" from your mother.
I love sayings like those on the Stonehenge assemblage, but they're better taken one at a time.
It looks like a beautiful walk, Ronni.

Oops! They're Canada Geese. We're happy for you in your new home.

What a wonderful place to walk! I think the plant with the blue berries is a Mahonia.

In British Columbia, we called them Oregon Grapes.

Of course, you are correct that they are geese. I just WISH they were mallards.

I think the bush is a holly bush, not blueberries.

You're gonna make me cry.
You didn't say how quiet it is, but I can hear the gentle flow of air as it whispers good morning.

Delightful. Thank you for giving us these moments. :)

Wonderful; gorgeous. What a lovely way to start the day.

Oregon is SO green. We've dried up and turned brown here to the south. Lovely walk!

What a perfect way to stretch the body and to center the spirit.

I love your blog postings with photos! Like walking along with you, perfect!

Beautiful place you're in...

This is a nice way for us to go on the walk with you. Do you have to drive to this place or can you walk to it? It looks like a beautiful area.

liloldme...
It IS quiet - nothing but rustling leaves when there is a breeze and the crows/ravens/blackbirds - whichever they are - who, apparently, followed me from Maine where they started screeching at first light.

Technobabe...
The park is about two minutes from my front door - down a short path, across the parking area and straight into the park. When I'm in the park, it's hard to know anyone lives nearby except for the mansions on the other side of the river.

That is a beautiful walk. I love the Willamette River, that whole area. The blue berries are on what is called Oregon Grape which isn't a grape and isn't edible that I know but the roots are supposedly a herbal remedy for digestive problems not that I'd test it to be sure...

It looks like what we call Oregon Grapes. They grow in my yard in Denver, but I'll bet they grow better in Oregon.

What a lovely walk.

What a lovely way to begin your day!!!! You would like my park -- it has mallards. The down side is that it also is loaded with Canadian geese.

Yes the plants are Oregon Grape or Mahonia. A small yellow flower in the spring. And it is the state flower of Oregon.

That is just a beautiful walk with so many different things to see along the way. I'm not a morning person, but that would be worth getting out of bed and get moving.

I should walk every day, and if I had a place like that to walk, I'm sure I would. Very pretty.

You lucky duck:) What a beautiful place to walk. My morning walk is not nearly so pretty, but noisy with many beautiful birds & critters. Dee

What a beautiful park and place for a leisurely morning walk taking lovely photos. Thank you for sharing.

PS: Are we getting any new "Featured Elder Bloggers" soon? Thanks.

You sure are an early bird...I remember once you wrote about being a lark. I must say that you have a morning walk that rewards you for being an early riser.

I can't see it well enough, but I think the flowering tree is a dogwood.

Loving the pics of your walk. I'm so glad you are there....

Great that you have such a lovely place to walk, Ronni. The air is so fresh and clean at that time of the morning. Hey, maybe 'Where Elders Walk' could be the start of another of those TGB sharing things, like 'Where Elders Blog' and 'Quarterstaff Revolution'. Except that since each is a series, rather than just one pic, we could each post them on our own blogs and you could feature them in turn, with just the links.

Thank you for taking us along on your beautiful morning walk. Being able to start your day this way is one more indication that your move has put you just where you need to be.

Definitely a mahonia, but I didn't know the alternative name of 'Oregon Grapes'. Are they edible? Just bought one for my garden.

The poet who is quoted on the stones is William Stafford, a longtime Lake Oswego resident and onetime Oregon poet laureate. His wife, Dorothy, still lives in town.

What a lovely, lovely park! Lucky you! The community obviously takes pride in it and can afford to keep it up. Nice.

A belated comment. . .I live in Seattle and just returned from a visit to Portland, where I thought of you as we drove by Uwajimaya. Oregon grapes are a member of the barberry family and the berries are not only loved by birds, but can be harvested for making preserves. I have heard of Oregon grape jelly, but have not tasted it. There is a tall Oregon grape (Berberis aquifolium), which can reach 10 feet, and there is another called Cascade Oregon Grape, (Berberis nervosa), which rarely reaches over 2 feet tall. (Reference info from Art Kruckeberg) Love your photos!

I love this! What a beautiful place to walk. I want to live there.