There's a lot of involuntary retirement happening in this awful economy. I'm sure some readers here are finding themselves out of work sooner than they anticipated or hoped. Ageism has always pushed older people out of work before we wished. Long time readers know Ronni started this blog when staring at this reality.

What I want to offer here is the story of a different kind of involuntary retirement that sometimes happens to gays and lesbians, in particular those trying to serve their country. The Service Members Legal Defense Network has published this letter from the spouse of a retired U.S. Navy officer as her contribution to the ongoing discussion of repeal of the Pentagon's "Don't Ask; Don't Tell" policy (DADT) which effectively prevents open and honest service by LGBT people in the military.

The author wants it publicized, so I am simply sharing Lynne Kennedy's letter to military authorities who are currently assessing the potential impact of repeal. [Emphasis is mine.] - Jan Adams

In 1990 - while working as a reference librarian at the Library of Congress - I met Joan Darrah, an active duty naval officer. I already knew about the ban on open service, but I soon woke up to the harsh reality that loved ones of gay and lesbian family members are forced to serve in silence, too.

Over the years, Joan had adjusted to living two lives - in the closet at work and out after hours. For me, it was a bit of an adjustment as I had been fortunate to work for an employer who valued my skills and expertise and realized that my being a lesbian in no way detracted from my ability to do a great job.

I knew that Joan could be deployed at any moment. She may be away from home for two or three years. I realized that being with an active duty military officer was even more constricting than I could have possibly imagined and I worried constantly about Joan’s well being. Yet, through it all, I knew our relationship was worth the compromises. I knew we had to make it work for Joan to continue to serve our country. 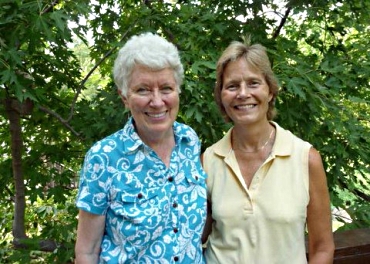 There were so many things that we had to be careful about. For example, Joan had asked that I not call her at work unless it was truly an emergency. When we were out in public, if Joan saw someone from work, I learned to “disappear” until Joan’s co-worker moved on. We didn’t dare go to nice restaurants on Valentine’s Day or even Saturday nights. We could not show any familiarity while out in public. I went to parties at colleagues' homes alone lest a guest I didn't know learn that Joan was in the Navy.

The events of September 11, 2001, caused us both to appreciate more fully the true impact of DADT on our lives and the reality of our mutual sacrifices. At 8:30AM that morning, Joan went to a meeting in the Pentagon. At 9:30AM she left that meeting. At 9:37AM, the plane flew into the Pentagon and destroyed the exact space that Joan had left less than eight minutes earlier, killing seven of her colleagues.

In the days and weeks that followed, Joan went to several funerals and memorial services for her co-workers who had been killed. Most people attended these services with their spouses whose support was critical at this difficult time, yet Joan was forced to go alone, even though I really wanted to be with her to provide support.

"As the numbness began to wear off, it hit me how incredibly alone I would have been had Joan been killed. The military is known for how it pulls together and helps people; we talk of the "military family," which is a way of saying we always look after each other, especially in times of need. But, none of that support would have been available for me, because under DADT, I didn’t exist.

In fact, I would have been one of the last people to know had Joan been killed because nowhere in her paperwork or emergency contact information had Joan dared to list my name.

Whenever I hear Joan recount the events of that day, I relive it and realize all over again how devastated I would have been had she been killed. I also think of the partners of service members injured or killed in Iraq and Afghanistan. They are unable to get any support from the military and they must be careful about the amount of support they offer to their closeted service member loved ones.

The events of September 11th caused us to stop and reassess exactly what was most important in our lives. During that process, we realized that this discriminatory law was causing us to make a much bigger sacrifice than either of us had ever admitted.

Eight months later, in June 2002, Joan retired from the U.S. Navy, and I retired from the Library of Congress. If it wasn’t for DADT, we might both still be serving in our respective positions.

Thank you so very much for posting this.

There are times when I despair of the prejudices found in the American people. If only the homophobic ones had to walk in a lesbian or gay persons footsteps for a year they would be forced to realize how their narrow minded attitudes cause great harm.

I have a dear gay friend in NYC who tells of the cruelty when one of the partners is hospitalized and the family refuses to let the other partner visit or take part in medical decisions.

I hope that gays are allowed to marry soon and DADT is a thing of the past.

I am extremely fortunate to be living openly with my wife in NM. I often forget just how lucky I am until a story like this reminds me. Thank you for that.

What a sad commentary on this 'land of the free' that we have created such an environment.

May i live to see the day when the hatemongers are completely overcome by the love of those who know better.

I heard recently a quote from a Somalian farmer asked why he thinks the US (and other countries) didn't intervene in the Darfur Crisis, and his response was, "You can't wake anyone who is pretending to sleep." DADT is nothing other than pretending to sleep and I thank you for posting this post. We can hope that you manage to make people ponder on the hypocrisy and injustice of it all. I hope you are enjoying your retirement and do not regret your choice of leaving the service. It was undoubtedly a hard decision.

Such a sweet picture of two people who deserve every happiness.

I have been friends for a few years of a gay couple who have been together for over 20 years. They are always in fear that one of them will have to be hospitalized and the other partner will have no say in any decisions that are made regarding his care.

Let's hope it will not be too long before we do the right thing and allow all same sex partners to marry...

Thank you for publishing Lynne Kennedy's letter - we need to be reminded again and again how much discrimination as well as financial and emotional punishment is still being exercised against gay and lesbian individuals in these 'enlightened times'- continued publicity is essential in helping to change public opinions.

With all the suffering in the world, it absolutely floors and shames me that this kind of bigotry is condoned by American policy. It's a travesty and what a loss of human potential! Lynne and Joan should be happily and openly living, loving, working and deciding their futures for them selves instead of being hemmed in and herded by the irrational fears that exist towards same sex relationships. May they both live long and loving lives...and may we soon see the day when this kind of story is a sad footnote in history.

Thanks for sharing the letter, Jan, and reminding me the importance of staying the course for change in this matter.

Let us pray that President Obama follows through on his intention to change Military Policy on Gays in the Military. I served two years at a very high level as just another common Soldier almost 50 years ago in the US Army (Ft. Monroe, Va--it was commonly called "The Little Pentagon" by Rank, "The Land of Sleeping Colonels" by us Privates: Continental Army Command Headquarters, the Commanding General was General John Waters, General Patton's Son-In-Law; the Lieutenant General was a Truman, one of Harry's Nephews. There was a WAC Headquarters (Chiefly Secretarial) Company on Post which was known by most to be filled with Lesbins: What an outstanding group of Soliders these Women were. Their professional contribution to our Country was substantial. I thought then it was foolish that these wonderful Americans could not serve their Country openly. Later, I served two years on a US Army Reserve Special Forces "A" Team. (My Team Leader was a Major who at the age of eighteen fought in the Battle of the Bulge.) Two of our Team were commonly known to be Gay. What magnificant Soldiers they were! I couldn't hold a candle to their knowledge, courage or military (read that Combat)expertise. Once again, I realized the Gay Military Policy was very foolish. I truly didn't give a damn what another's sexual orientaion was just as long as when the time came, he/she was able to stand and fight or use a typewriter proficiently. I have long been disgusted with the attitudes towards Gays of some of the Religious bigwigs in our Country: Claiming Being Gay is a "chosen" lifstyle. In my own Family, I have the Hardnosed, Highly Decorated Stud Muffin US Army Helicopter Pilot Son on one end and a Gay, absolutely outstanding , Gay Massage Therapist Son on the other. Don't tell me it's "Chosen": Same Family environment, same Parental Love and guidance, same encouragement to work hard and strive to help others as well as your own Family. In my opinion, It's long past time to treat our Gay fellow Citizens with the respect, appreciation, and love they deserve.

It is so sad that all these issues have to be legislated....ie. abortion and being gay or whatever...what business is it of anyone how we live our lives and the judgements we privately make. We need to have an accepting society that focuses on law abiding citizens doing what is right -not their personal choices.

It really upsets me that freedom of choice comes with such abuse.