The side men on this Sonny Rollins track reads like a Miles Davis quintet reunion party – Red Garland, Paul Chambers, Philly Joe Jones. Coltrane is on the album from which this track is taken too but missing from this particular tune. 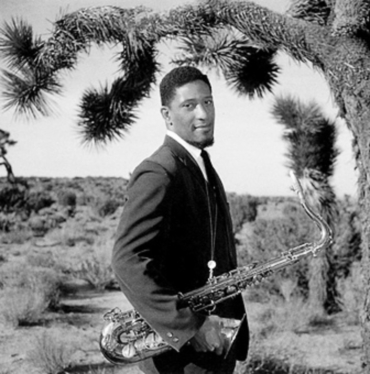 Sonny was born in New York with the name Theodore and had a nickname of Newk (not to be confused with the Australian tennis player). He started playing jazz quite young, he was eleven when he played with Thelonious Monk. Talk about starting at the top.

Sonny’s name started being known in the early fifties when he recorded with Miles Davis, the Modern Jazz Quartet, Monk and others.

He has always been less than confident about his prodigious talent and over the years he has taken extended sabbaticals to practise and improve (as if he needed to). Most famously he’d take his horn out to the middle of the Williamsburg Bridge in New York and play for the passing cars, the fish and anyone who may have been wandering by.

Sonny is still playing as well as ever. This is My Reverie.

Marian McPartland is an unlikely jazz musician - after all, she's English, white and a woman. This is how Leonard Feather described her in a column in Downbeat magazine in 1951 (actually he said "girl,” - well, it was 1951).

He was suggesting that because of these strikes against her, the French jazz fans, where she was appearing at a jazz festival, wouldn't accept her. I think he was rather dismissive of those fans as the French, and other European countries' fans, are generally more appreciative of jazz and blues than their American counterparts. (Not those reading this column of course, sez he trying to suck up to his readers). 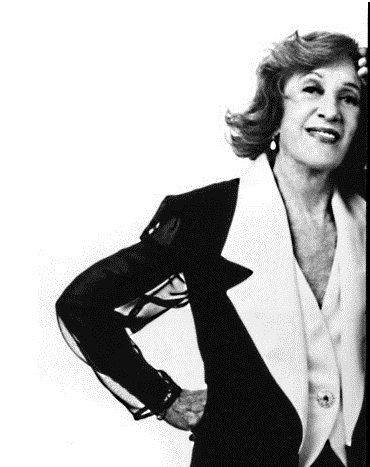 In spite of that initial faint praise, Marian appeared many times in the pages of that magazine, not only in articles, but as a columnist herself.

Margaret Marian Turner was a musical prodigy and studied classical music from the age of three, piano and violin. However, later, when she studied at a school of music in London, she discovered jazz, much to the dismay of her folks.

She started touring in small jazz groups and, during the war on a USO tour in Belgium, she met and soon married American cornet player Jimmy McPartland. After the war was over they moved to America – Chicago and New York particularly - where Marian played in nightclubs. She has had regular radio programs and all sorts of things that would take too long to relate.

Here she is playing Maria from "West Side Story.”

Gerry Mulligan was a classically trained pianist who took up the baritone saxophone as his main instrument. He was not only a jazz player, he was a notable composer and arranger. In later years he also composed classical pieces. 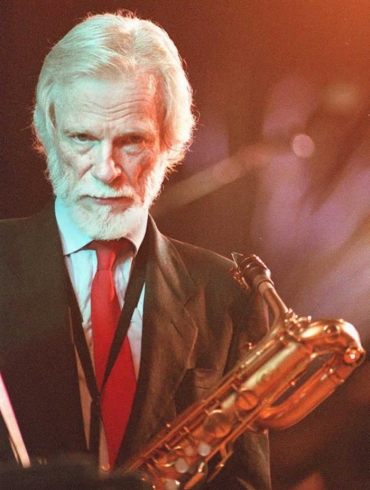 He was an important member of the nonet Miles Davis put together to record Birth of the Cool. Gerry not only played on that, he composed and/or arranged a number of the tunes.

He was mostly based in California where he worked as a quartet without a piano, unusual at the time (or any time). His early quartet featured Chet Baker. This relationship continued for some time until Gerry was busted for drug possession and sentenced to some months in the slammer where he quit his habit.

Chet was also a heavy drug user but continued this practice. They didn't resume their musical partnership after Gerry was released. Here's the quartet playing All The Things You Are.

♫ Gerry Mulligan - All The Things You Are

You’ve already heard some Chet Baker on the previous track. That was him playing the trumpet. 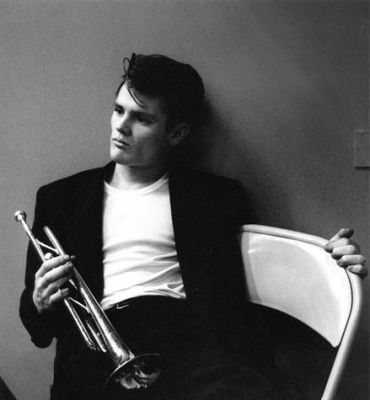 As mentioned, Chet was an integral part of that incarnation of Gerry’s quartet, indeed he pretty much received equal billing at the time. Chet not only played the trumpet, he was a fine singer as well. He was also pretty handsome as a young fellah until the drugs did their thing which also put paid to his career for some time.

Later in life, like a lot of jazz players, he settled in Europe and remained there until his death. Here he is playing and singing Let's Get Lost.

Even Roland Kirk could play only one flute at a time. 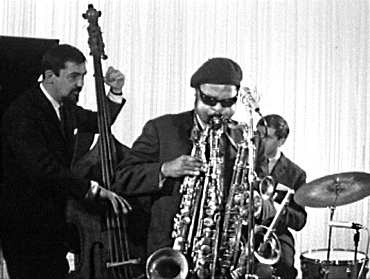 Roland was born Ronald Kirk in Columbus, Ohio. He was motivated by a dream to switch the letters in his given name to become Roland. Years later he added Rahsaan to the front of his name after hearing it in a dream. You really should give up those pizzas with extra anchovies before bed, Roland. He became blind at a young age as a result of poor medical treatment.

He dabbled with jump blues and R&B early in his career but soon switched to bebop where he remained. He has played with everyone of note in that genre of music (and others as well). Roland was known for shoving two or three saxophones in his gob and playing them simultaneously - either those or such instruments as the manzello or stritch, which to my untrained eye, both look like saxophones anyway. Only the flute today though.

This is Serenade to a Cuckoo.

♫ Roland Kirk - Serenade To A Cuckoo

Someone who’s often rather airily dismissed by the jazzier than thou types is Dave Brubeck. I suspect it’s because of his huge popularity. They can’t claim him as their own if half the world knows about him. 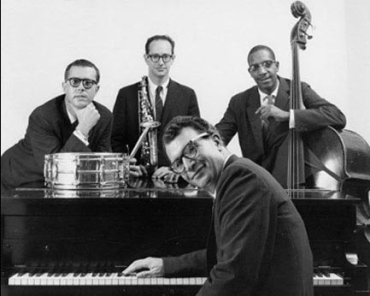 I remember years ago, decades ago really, when the Dave Brubeck Quartet was touring Australia there was the then-ubiquitous airport interview/press conference. I've forgotten where it was, probably Sydney. This wouldn't happen in Melbourne.

One of the tabloid journalists asked, "How many are there in your quartet, Mr Brubeck?" Of course, if he'd asked "How many musicians in your quartet?" Dave could have answered, "Three and a drummer. (Sorry any drummers reading this.)

Here are all the members of the quartet playing It's a Raggy Waltz.

While we're talking about popular pianists, Nat King Cole started out in a jazz quartet that became a trio when the drummer left (probably got sick of the jokes). 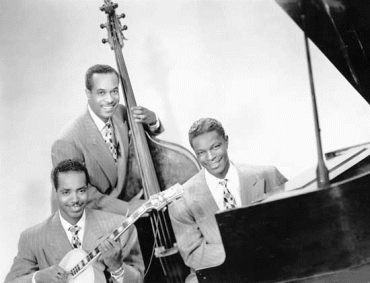 This track, Syncopated Lullaby, features some fine playing from each member of the trio. The other two are Oscar Moore on guitar and Wesley Prince on bass.

Nice music to begin the fall season. Thank you as always.

I don't know much about jazz and I really appreciate this introduction. In listening I realize that it is inviting me to participate in listening in different ways than I'm used to.
It is not so much a musical ride as it is a hook and run after. More interactive and playful. I will be listening to more jazz. Thanks!

Peter, you sent me right up to heaven this morning. I feel like you posted the music just for me. I am familiar with most of the musicians and songs and it's my kind of 'listening.'

My son's main instrument is the alto sax, although he plays all of the saxes, flute, clarinet and bassoon.

I as lucky enough to attend a Brubeck concert in Colorado Springs many years ago and it is one of the highlights of my life. Paul Desmond was on the sax then and it was an exciting evening for everyone who attended.

Best of all I was thrilled as I listened to the recordings to discover that the bass now sounds like bass and the piano treble notes are not as tinny sounding as they were. I was actually listening to music. Whoo Hoo !!!

I love the music and musicians that you include in your blog.
Do you know of Dave Mckenna, a great stride pianist who was born in Rhode Island, played often in Cape Cod and also internationally (such as Japan. )He recorded for some major jazz labels doing solo and also with other well known jazz musicians. He passed away about two years ago but hopefully his music will lie on.

Good choice of music. If I may be so bold -- some Sonny Stitt, a little Bird, a taste of The Jazz Messengers (the group with Silver, Mobley, and Dorham) and a smattering of Organ (say some Jimmy Smith and some McGriff) -- then later do some JATP, etc.

You can go wherever you want from there -- 'Trane, Ayler, Ornette, etc. -- really give folks some new stuff to listen to. After all, we may be getting old --- but we're not dead.

Some great jazz artists here including some little known to the casual listener.

I wrote an extensive piece on Marian McPartland -- a frequent very popular visitor to the jazz scene in Columbus, Ohio when my husband was playing there.

Nat Cole's group always a favorite, though I could easily comment on them all, but will suffice with saying I still like listening to Brubeck's and Desmond's classic "Take One."

I love jazz old, new, and in between. I find it a welcome respite from the 'noise' that passes for music today. Nat King Cole, Miles Davis, Dave Brubeck and John Coltrane are particular favorites and there's a guy here in town who plays a mean tenor sax who I follow. There is some fine music out there outside the big time.

They had opened a really nice new jazz club here that featured excellent artist but it went out of business. Five bucks a beer in a town where industry has died is not a good idea.