Home About Archive Contact
Social Security: Doing It All Over Again
GRAY MATTERS: A Ray of Light for Health Insurance Consumers

It's easy for me to get wound up, as I did yesterday on Social Security, about all the many things that seem to be wrong with our country; I do it every day. But mixed in with that is one of the growing pleasures I have discovered about retirement – the ebb and flow of quiet, ordinary life that I did not have the time to appreciate so much during my working years.

So, herewith, is a substance-free Friday.

Let's start with my new Kindle. Uncertain as yet how I will use it in conjunction with “real” books, I was unwilling to buy anything yet, so I downloaded the Sherlock Holmes collection. It cost about 99 cents and it really is ALL of Conan Doyle's Holmes output – the four novels and numerous short stories - in date order of publication.

I like this little gizmo. It fits nicely in my hand. The pages turn with a satisfying click of the button and I'm slowly working my way through Watson's tales in the hour before sleep most nights. I'm impressed with how well they hold up as entertainment 120 years after their writing.

Fall has arrived in my town with a gorgeous vengeance and I need venture no farther than outside my door to be awed by nature's flamboyance. 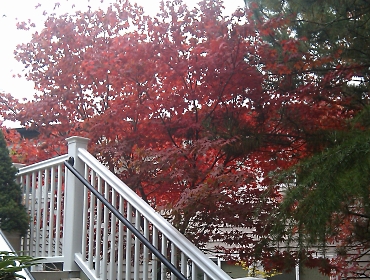 New England, where I lived for more than 40 years, is rightly celebrated for its fall exuberance but the colors here in my part of Oregon seem brighter, richer and deeper than in the east. Maybe it is the contrast with the dark color of the ubiquitous evergreens. 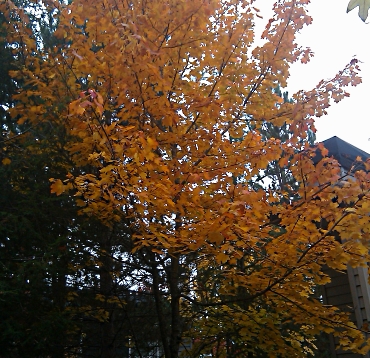 Each year, the New York City media give instructions on where to drive from Manhattan on weekends for the best leaf peeping. Nowadays, no driving necessary. 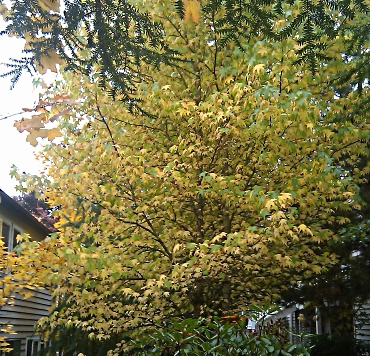 It's raining as I write this on Thursday so the leaves won't last much longer. But for the moment... 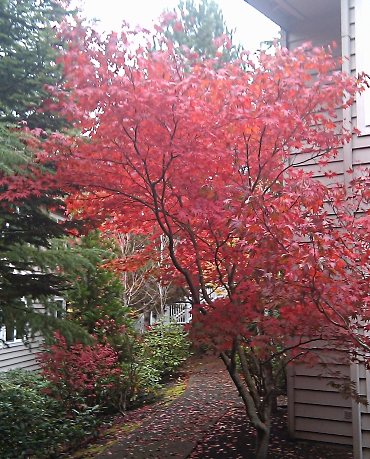 My young friend Stan James of wanderingstan has been living in Berlin for more than a year. Recently, he visited Paris and this postcard arrived from him yesterday reminding me that I really ought to get there again before I die. 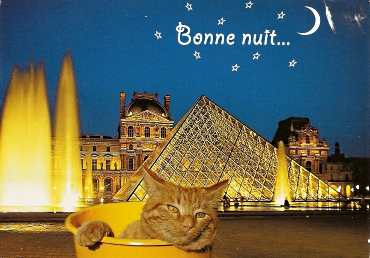 About ten days ago, a black-and-white cat turned up outside the dining room window. I might not have noticed if he or she had not set off a lot of conversation from Ollie. (Sorry about the crappy photo.) 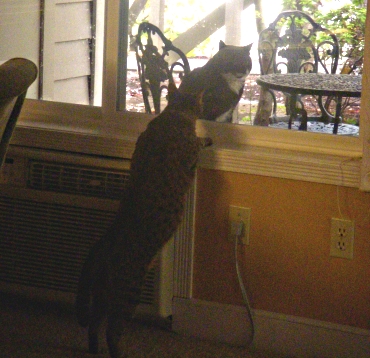 Now the cat visits two or three times a day for 30 minutes or so, his/her arrival always announced to me by Ollie who is interested but also wary. At first I thought he/she might be a stray – a potential companion for Ollie? But a collar and chubbiness sank that idea.

Don't forget that tomorrow is Jon Stewart's Rally to Restore Sanity on the Mall in Washington, D.C. If I still lived in the east, I would attend, but it's way too far to go from here. Comedy Central will be broadcasting live tomorrow from the event so I'll be there in spirit via television.

On Wednesday, President Obama visited Stewart's television show. Did you see it? The interview ran long, so the producers ditched the opening Stewart had taped, but posted it for us at The Daily Show website. Here is that original opening titled Let's Keep the President Waiting:

Mostly during the interview, the president was in campaign mode and I wish Stewart had asked some more-pointed questions. Nevertheless, he managed a couple of interesting zingers and the young audience was wildly enthusiastic throughout. If you missed it, you can watch the full interview here.

So that's how it's been in recent days at Chez Bennett. Nothing special. Kinda boring. Just life. And I like it that way.

I just finished reading my first book on my Kindle and I THINK I liked reading that way.

I read "The Candy Bombers" about the pilot who thought up the idea of sending chocolate bars on little parachutes to the children of the city during the Berlin Airlift. It was a wonderful book, full of the politics of the Truman administration .

I liked the Kindle but when I read a book I sometimes forget a character or confuse one with another,so I turn back and reread a page or two from a previous chapter.

You can probably go back on the Kindle,too, but I don't know how, so I couldn't do it.
Does anybody know how you can view a previous chapter on the Kindle?

I love that Ollie has a friend.

Three cheers for a quiet, ordinary life where we actually get a chance to write, "Today I was bored" on the calendar!

I like it and have been enjoying our fall which I think is a very pretty one maybe for the reasons you mentioned. It helped that it stayed dry a long time maybe.

You make some good points for kindle. I know holding a big book and turning the pages is not something I like much. Getting the old classics at cheap prices sounds good too.

This is a great piece, Ronni. It's a pleasure to read something where the writer is just breathing. I feel so *assaulted* all the time.

I enjoy hearing about your "ordinary" day and would hardly call it a day "with no substance" ... I do know what you meant - the helpful links. Sometimes it seems to me that we learn so much from the "ordinary" of others. At least I do. For me, that's where the real "substance" is. It's why I enjoy Blogs so much, even though I don't have one of my own.

As for Kindle: I print out most longer pieces that appeal to me online. Does that tell you anything? I need it in my hands, the feel of the book, the page. Cold plastic has no appeal to me. I can't imagine settling down with it in bed. My son swears by his though, as he reads a lot when he travels and he feels liberated from the heaviness of the books he always brought along. Who knows, maybe one day? I have learned to never say never.

Mary is spot on. What you call a substance-free and self-indulgent post actually supplied links, a delightful armchair fall color tour for a fall-disadvantaged coastal Mississippian, and a witty kitty tale. I had a good laugh thanks to the "collar and chubbiness" comment.

Beautiful Fall colors in your photos. Thanks for sharing because the colorful showing of the leaves is something you don't see in the desert unless you go up in the mountains.

Ollie and his new friend are so cute chatting through the window.

Lovely....thanks so much for the beauty. Perhaps that's one reason I post a photograph on my blog every day. I cannot imagine life without these pauses for beauty to rejuvenate ourselves. Color...wow. We don't have much of that down here.

Yes, saving the world, saving SS, saving us all is important, but perhaps we need to save it in context.

It's nice for Ollie to have a friend who visits!

We have virtually no color in our trees yet. I don't know if we can blame it on the drought and high temps (up until yesterday).

I like all your posts, but particularly this everyday life one.

I love my Kindle too, in part, because it's so light I can tuck it into my smallish purse and not notice any extra weight. And I am tired of filling up boxes with books that I won't read again.
My one problem with it is that it gives Amazon an awful lot of power over what is available and how much it costs. I noticed the Kindle edition on one book was actually priced higher than than the hard copy. Fortunately, this is a Ken Fowlett book and I wouldn't be tempted even if it was free.

Ahhh. Nice relaxing post. We all need to read and see one like this especially in this frantic election season.

If next Tuesday ever comes, can sanity be far behind.**

Hey Nancy--you can search for a character, etc. in your Kindle by opening the story you are reading and (then) hitting the Menu button. It will give you a list with the first mention in first place.

It sounds like both you and Ollie are settling in nicely to your new home. I feel the smiles. What a lovely post. Thank you for sharing your day!

Yes, what a nice post in the midst of all the craziness going on.

And, yes, one look at that cat and I knew he was either just recently lost or he has a home--chubby indeed! He/she is on par with my Chunky Lisa.

And I thank you for the link to John Stewart's interview of our President. I'd missed it here in CST due to watching the final fabulous crazy wonderful last inning of the World Series. Way to go Giants! I did see Stephen Colbert, who did a classic schtick featuring "people to fear" (keeping fear alive). Here's the link to the "Five Basic Fear Groups"
http://www.colbertnation.com/the-colbert-report-videos/363665/october-28-2010/fear-for-all-pt--1 (There's a part 2 that follows.) Too bad he omitted Liberal Elites.

Love the tree leaf colors. Glad you have some relaxation time and Ollie has a friend.

I think there are going to be many major political issues to combat the rest of my life. Seems much of what appears to be resolved seldom is, such as this Social Security matter.

There's still the issue of health care. Candidate opposing my House Rep. Dreier wants Medicare to be able to negotiate prices with drug companies as I note in my Calif. Election Note.

History will show we are living in a unique time of profound change for our nation and those of us who live here. I think there will be much necessary adaptation needed. People will be slow to realize and accept what is happening, but, hopefully, will gain insight sooner rather than later.

When aging..none of our days are "ordinary". I will always love your posts. Wish I could write as you do. I guess.. You speak for me. We are kindred spirits. We are about the same age.... Life is good!!!!