ELDER MUSIC: Back in the Saddle Again

I’m a country boy. Okay, I’m not one now and haven’t been one for more than 50 years. I guess that means I’m not a boy either. However, I was born and bred in the country, but I was a townie.

My daddy was a tailor (he sewed these new blue jeans). I have to admit that I’ve never been in the saddle, let alone back in one, but that’s not going to stop me. Where I grew up they didn’t round up long horns. It was wheat that was rounded up.

Anyway, I’ll start with the song of the title.

Gene Autry was the original singing cowboy. At least the original in films. There were probably a bunch of them before him but we have no filmic record of them, none that were shown on TV on Saturday afternoons anyway. 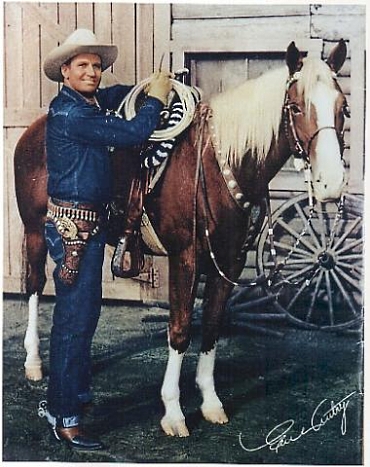 Gene was born in Texas and the family moved to Oklahoma when he was a teenager. After leaving school he got a job as a telegrapher, often working the midnight shift. To wile away the time he’d sing and play guitar.

He was overheard by Will Rogers who suggested he go to New York and work professionally. So he did. It wasn’t quite like that, but it happened eventually.

He made a number of records in the early Thirties and was discovered and put in films, usually with his good friend, singer-songwriter Smiley Burnette. The rest, as the say, is history. He was a canny investor, particularly real estate, and when he died he was rolling in it. This is Gene with his signature tune, Back in the Saddle Again from 1939.

♫ Gene Autry - Back in the Saddle Again

There have been several versions of the Carter Family. 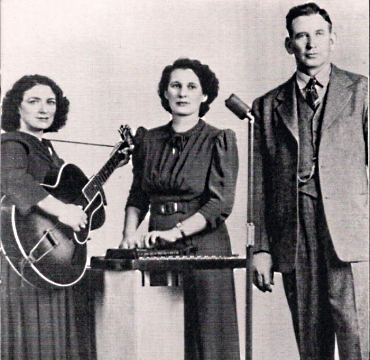 They are all the same family, but when someone died another took their place. This is the original version – A.P. (Alvin Pleasant), his wife Sara and her cousin Maybelle (who married A.P.’s brother Ezra, also called Eck).

Maybelle, of course, is the mother of June, once married to Carl Smith and they were the parents of Carlene who was married to Nick Lowe at one time. June later married Johnny Cash, the father of Rosanne who was once married to Rodney Crowell. Got that? There’ll be a test later. These people were/are all fine singers.

Back to the Carter Family. Remember them? In 1935, they recorded their most famous tune, Wildwood Flower (well, except, maybe, for Can the Circle Be Unbroken, a song that seems to have changed its title slightly over the years).

The Sons of the Pioneers was formed in 1933 by Leonard Slye and a couple of his friends. Old Len is probably better known to most of us as Roy Rogers. 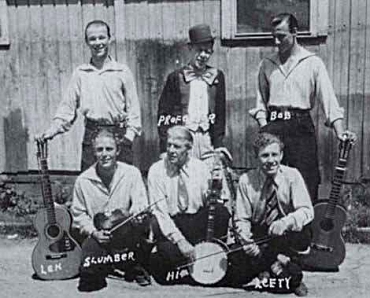 The Pioneers are still performing to this day. Of course, none of the original members are still with us – it’s a bit of a George Washington’s axe of a group.

This is a song I can relate to because where I was from there was the Little Desert to the south and the Big Desert to the north. They were really imaginative when it came to naming deserts in my neck of the woods (not much in the way of woods either). Cool Water from 1945.

♫ Sons of the Pioneers – Cool Water

Patsy Montana, known as Ruby Blevins by her mum and dad, was a singer/songwriter before that term had ever been invented. She was the only girl in a family that had nine boys. 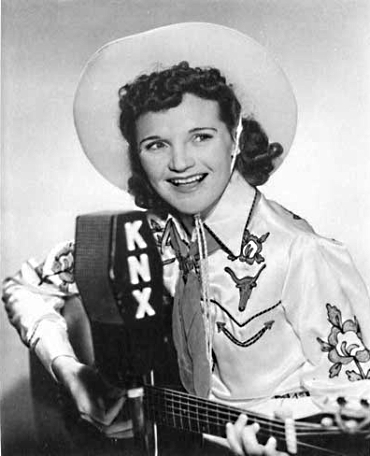 Patsy studied the violin at university but won a talent show with her singing and guitar playing (and a bit of yodelling too, I believe). First prize was to do the same on a local radio program. She went to Chicago with a couple of brothers to enter a large watermelon they’d grown in a World’s Fair contest. It’s not known by me how the watermelon fared.

In Chicago, she appeared on radio and eventually recorded. She was the first female country artist to sell a million records with her song I Want to be a Cowboy’s Sweetheart. Patsy continued to record and perform into the 1990s. She died in 1996 at age 87.

Here’s her million-seller, recorded in 1935.

♫ Patsy Montana – I Want to be a Cowboy’s Sweetheart

Bill Monroe was the youngest of eight kids born into a musically inclined family. As his older siblings had already laid claims on the guitar and fiddle and so on, Bill got stuck with the mandolin. Not only that but his brothers insisted that he remove four of the eight strings so that he couldn't play too loudly. That's big brothers for you (although I wouldn't know because I don't have any. Just a big sister). After both parents died, Bill lived with his uncle for a while. Uncle Pen played the fiddle in local dances and eventually Bill joined him. Bill later teamed up with a couple of his brothers to form The Monroe Brothers group.

Later still he formed the first of many groups called The Blue Grass Boys and with these groups pretty much invented bluegrass. There's a lot more to his story – books full – but I'll just have him play Orange Blossom Special from 1941.

Jack Guthrie was born Leon Jerry Guthrie in Oklahoma. He was Woody’s cousin. 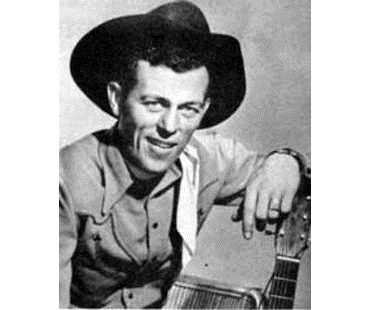 Jack rewrote Woody’s song Oklahoma Hills and recorded it in 1945. It became a hit - however, Jack was in the army, in the Pacific. When he returned he wrote and recorded more songs and played gigs around the west coast. His version of Oakie Boogie, a hit in 1947, is yet another contender for the first rock and roll record.

To complete the family connection, Arlo has recorded Oklahoma Hills also. Jack died in 1948, aged only 32.

Ernest Tubb once said that he thought that 95 percent of the men in bars who heard his music on the juke box would say to their girlfriends, "I can sing better than him" and Ernest added they would be right. 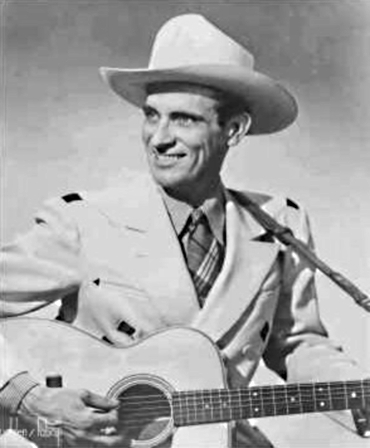 To make up for that he surrounded himself with some of the best country (and other) musicians to make himself sound good.

Ernest was born on a cotton farm near the wonderfully named Crisp, Texas. Alas, Crisp is a ghost town these days, I believe. He was inspired by Jimmie Rodgers and spent his spare time learning to yodel, a skill that's always in demand I've found.

He was apparently successful as he found a job on a San Antonio radio station. I think there was singing involved as well as yodeling.

From there he wandered around Texas to various radio stations driving a beer truck (the dream of every Texas lad) and eventually landed a record contract. There's a lot more to his career, but these days he's probably best known through his eponymous record stores. Here is Ernest singing Walking the Floor Over You recorded in 1941.

♫ Ernest Tubb – Walking the Floor Over You

Bob Wills was born near Kosse, Texas according to my sources. I wonder what that means. Were his folks heading for Kosse and didn't make it or were they just hanging around out there and, well, there's young Bob? It doesn't really matter in the scheme of things.

His father was a statewide fiddle champion. They have contests for these things? I suppose they do. The family played music and raised cotton and young Jim Bob (as he was initially called; well, he was from Texas) learned to play fiddle and mandolin. 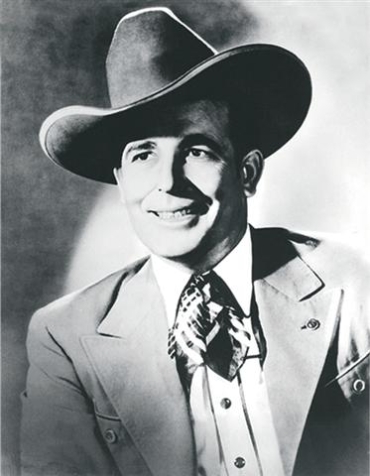 As a young man, he drifted around, hopped freight trains, got married, became a barber and played in minstrel and medicine shows. On one show there was already a Jim, so he became just Bob. He was known for his hollering and wisecracking that he learnt from his father and grandfather, something he retained when he became famous.

He grew up around blacks and was influenced by the blues. He also liked Glenn Miller and these elements and others turned into the music of Bob Wills and the Texas Playboys.

In the mid-Fifties he was quoted as saying "Rock and Roll? Why, man, that's the same kind of music we've been playin' since 1928.” This isn't rock & roll, it's Take Me Back to Tulsa from 1941, with the inimitable Tommy Duncan on vocals.

♫ Bob Wills – Take Me Back to Tulsa

Thanks for putting this together for us. . .My memory is of Gene Autry probably because he was in the movies. Didn't he also own the LA Rams football team?

This column was GREAT fun! Sons of the Pioneers are a favorite of mine. I recall buying a tape of theirs in the 80's and suffering an arched brow in the record shop from a hipster...

I did a Google Earth search of Crisp, Texas (until it creeped me out to realize what everyone can see) and there is, indeed, nothing there but a hapless house that has too many pictures documenting it's activities. Perhaps that was the old home of the famous Ernest Tubbs...certainly there was plenty open area to yodel without being disturbed.

I sincerely hope St. Peter does not require me to recite the schematics of the Carter family tree for entrance into the sublime afterlife, as I am sure to get a room with a stuck thermostat!

Thanks for yet another entertaining music lesson!

My dad could play most any instrument by ear...Bill Monroe's Orange Blossom Special transported me to a long ago time when my dad was alive ...and pickin' an a'grinnin'.

My Grandma used to listen to these singers on her console radio (with short wave) when I was little and I'd sit on her lap and we'd sing with them. She never missed the Grand Old Opry, I think it was in the Ryman Auditorium by then, circa 1944-and later. And her musical tastes contributed my my eventual Flatt and Scruggs addiction.

I enjoyed this post and music very much in spite of the fact that I was a country-phobic for years and years--telling my Pa it was for hicks! I would regret that years later when I was actually old enough to appreciate the talent of these largely untrained country artists. By the way, my Pa yodeled--after a fashion--and I tried it myself once when I didn't think anyone was noticing. I'm still intrigued by it.