I've been asked to do The Beatles. I wouldn't have bothered otherwise - after all, what else new is there to say about them? Same reason I haven't touched Elvis, Bob, Frank. Everyone knows them intimately and I might say something that folks will disagree with. Not that that's stopped me before now.

So, The Beatles. That's John, Paul, George and Ringo for anyone who has lived in a cave for the last fifty years. They all have surnames, but you know what they are. 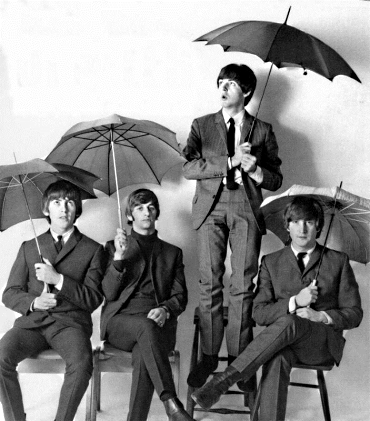 When I first heard their music I thought it was okay but rather derivative. They did covers of Chuck Berry, Little Richard, the Isley Brothers and so on and I thought the original versions of the songs were superior.

Besides, I was listening to Bob Dylan, Thelonious Monk, Miles Davis, Joan Baez, Judy Collins and had a rather snooty attitude to music. That changed. I think it was hearing what The Byrds did to Bob's song that brought me around.

I didn't buy any of their albums at the time until the white album. Okay, I did get Rubber Soul and Revolver after that. I've played all their disks to select tracks for this column and, hey, they're not too bad at all.

Norma, the Assistant Musicologist, suggested that as this is an elders' website, When I'm 64 should be included. Too obvious for me. I decided to eschew the songs everyone knows, the big hits. Go for lesser known ones. 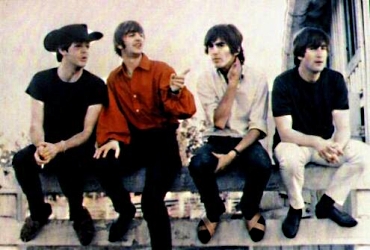 I had a friend who had “A Hard Day's Night” album way back when this was new (well, he probably had a bunch of others as well) and he'd play it for me. When we got to this track I'd say, "Play that again." I say that to this day as it's still a favorite of mine - Things We Said Today. 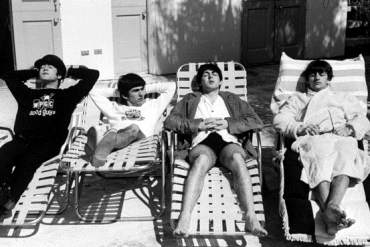 I'm Looking Through You is a little unusual inasmuch as Ringo doesn't play the drums. He plays a Hammond organ (although you have to listen really closely to hear that). He also taps a matchbox to simulate handclapping (or something). You can also hear Paul drop the tambourine half way through the song.

The song is famously about a spat Paul had with his then-squeeze, Jane Asher. He didn't like it that Jane was off furthering her own career.

♫ I'm Looking Through You 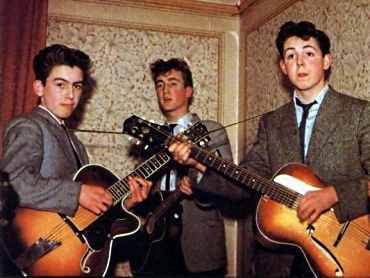 I'm glad I was asked to write this as it got me listening to the music again, something I really haven't done for a long time. This track in particular struck me as a fine tune that I'd really put out of mind. I'd say it was underrated in the canon (if anything of The Beatles could be described as underrated). This is For No One, an exclusively Paul song. Ringo was the only other Beatle to play on the track.

You've Got To Hide Your Love Away is just basically John doing Dylan, remarked Paul at the time. There is certainly an influence there with the acoustic 12-string guitar and the opening that sounds suspiciously like Bob's I Don't Believe You.

The influence went in both directions. Paul wasn't immune to such things either as he and Brian Wilson were looking over each other's shoulders as well. Good thing, too, as all of those mentioned raised the bar another notch with each new release.

♫ You've Got To Hide Your Love Away 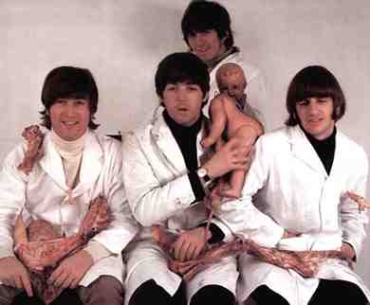 On every Beatles album there was a song by Ringo. I'll do the same. This reminds me of a routine by the late great comedian Bill Hicks where he said something along the lines of, "You know The Beatles were doing drugs - after all, they let Ringo sing.”

And here he is (Ringo that is, not Bill) with Boys. This was suggested to me by the A.M. She said it's her favorite Beatles song. It is an exuberant piece from their first album. 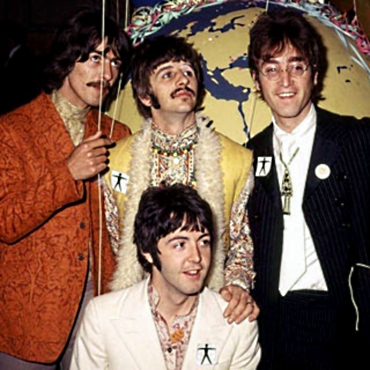 So much for Boys. Sorry to be so obvious here but Girl seems as if it should be next track. So it will be. This is one from "Rubber Soul," certainly in the running for their best album. 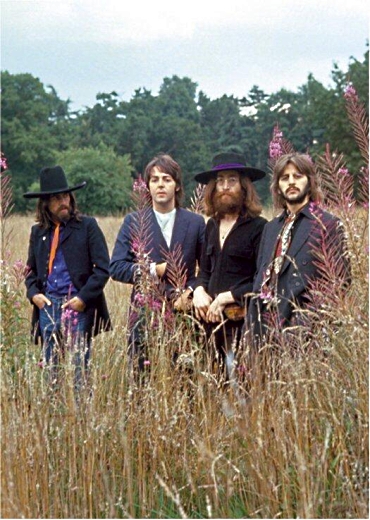 I'm including this next track, although it's quite well known, because it's the first time the lads had one of their contemporaries play on any of their songs. Okay, they'd had George Martin play piano and other instruments and a bunch of classical players on Sergeant Pepper and elsewhere, but they don't really count.

This is a guitarist who seems to know that the strings point away from him. You may know him, name of Eric Clapton. George and John played acoustic guitar on this track and it was Eric's beautiful sinuous electric playing that made this track. While My Guitar Gently Weeps.

♫ While My Guitar Gently Weeps 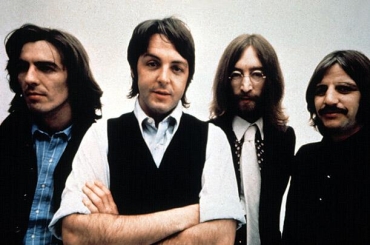 The Long and Winding Road was actually a big hit which rather goes against my initial premise. The "Let It Be" album was the "difficult" album. They recorded each song dozens of times. Okay, they did that with others as well, but not as rancorously as with this one.

Finally, they got so sick of it all that John gave the tapes to Phil Spector and asked him to do something with it. Spector did his usual thing and came back with an overblown, typical Spectoresque production.

Paul and Ringo hated it (probably George as well) but they were so tired of the whole thing that they let it be (sorry) and that's the album that was released.

A few years ago, the album was re-released stripped of the superfluous folderol as "Let It Be (Naked).” This is the album that should have been released originally. Here is The Long and Winding Road as it was intended.

♫ The Long and Winding Road 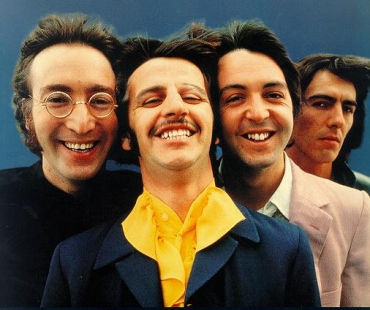 I'll end with my favorite Beatles song, although, I prefer it done by Judy Collins (sorry Beatles fans). In My Life.

I have loved the Beatles ever since I heard "I Want to Hold Your Hand" on the car radio. I bought the album "Meet the Beatles" and I still have it, as well as 3-4 others, and all the tapes.

Loved this! And the timing is perfect. Just watched Across the Universe (from Netflix). A little Glee, a lot of Mamma Mia, with a heavy layer of the angst of the times, but a trip (and I mean that in all connotations) back to the sixties that was surprisingly good at capturing the zeitgeist. Basically a romance to Beatles music, performed admirably by the cast. I recommend it.

I so enjoy these musical trips on Sunday morning.

I love to hear obscure Beatles songs! There were so many of them that nobody ever hears, because they play only a select few on the oldies stations...thanks!

I've hoped you'd do a Beatles column, especially because you didn't seem to like them. Nowadays, I find the albums I like the best are the earliest ones, up through Revolver. They're purer, less pretentious, and far happier.

Good, bad or indifferent one cannot deny the floodgates of memories rich and absurdly romantic that wash over a person in hearing a Beatles song. The music certainly takes the cutting edge off of the teenage years for me. An opiate for us elders, I think.

I'm with Peg regading "Across the Universe". It was a highly improbable hit with me. Rarely am I forced into a viewing a film only to find myself seized so profoundly... and smitten, too! I can't get people to watch it, such is the prejudice.

Thanks for posting these.

My late wife saw them twice, the second time blackmailing her parents into driving her from San Antonio to Memphis by threatening to take a bus if they didn't. (In fairness, her father was always up for a road trip.)

According to her, the fans were screamers or criers. The shows were about a half hour long, but as she told one of my brothers, "Trust me: We couldn't have taken much more."

Citizen K's late wife is correct. I saw The Beatles twice when my then-husband hosted their shows.

At the first one, I was standing in the few feet between the front of the stage and the barricades and even I couldn't hear them singing for the noise from the screaming crowd.

Worse, those girls were throwing jelly beans at the stage and they hurt like hell when they hit you.

I stood in the wings for the second show. Couldn't hear them then either, but at least I avoided the jelly beans.

In MY life, I couldn't have loved them more. They represent my late childhood, my only slightly rebellious teens, and my young adulthood.

Now, their music is the perfect soundtrack for so many memories.

Enjoyed your selections. Your column is a weekly pleasure. Thanks.

That is my favorite Beatles' song also (but I prefer it by the boys).

If anyone has or is developing a time machine please let me know. I want to go back. :/

Lydia, I want to go back, too!