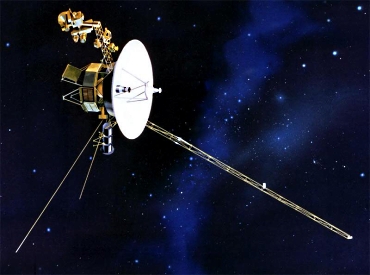 Voyager 1 and 2 were launched in 1977 to fly past Jupiter and Saturn and take photos of those planets. They were also to make other measurements: magnetic flux, atmospheric conditions and so on. They did the same with the various moons around these planets as well.

These moons were found to be a lot more interesting than we had previously imagined. Because of a fortuitous planetary alignment, Uranus and Neptune were in the right area so they flew by these and obtained the first ever close-ups of those planets. They built things to last back then. The Voyagers were designed for five years of service and the craft are still going after 33 years. Not long ago they flew through the Heliosphere, the giant magnetic bubble created by the sun that envelops the solar system. This is the area where the solar winds reach their limit and it could be said to be the edge of the solar system.

Thus the Voyagers could now be considered to be in outer space and are continuing on their journeys (in different directions). It's pretty unlikely they'll meet anyone out there as space is big. Really big. You just won't believe how vastly, hugely, mindbogglingly big it is, but you never know, they could meet someone. (Thanks Douglas).

You may wonder if I've inadvertently sent the wrong column today, that this was meant for a physics or cosmology website. But never fear, all will be revealed.

Attached to Voyager is a gold record. Now, this isn't the sort of thing awarded to The Beatles for Hey Jude. This is gold-plated copper. Gold, because it's very stable and won't react or degrade.

There are also hieroglyphic instructions on how to play it. On the record are sounds of Earth: bird song, children's voices, rainfall, surf, politicians rabbiting on and that sort of thing. Also included is music from our planet and that's what this column is all about, featuring a selection of that music. 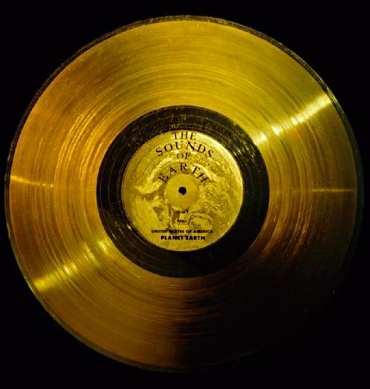 The first, and most obvious place to start, is J.S. Bach. 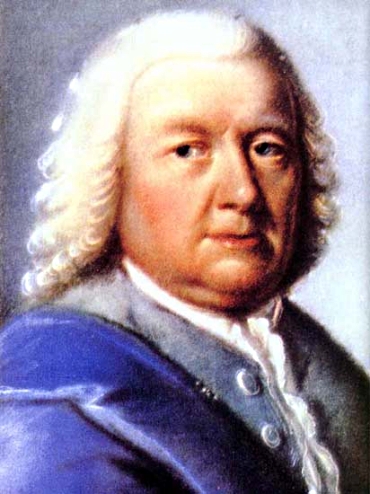 Bach wrote the Brandenburg Concertos when he was employed by Prince Leopold of Anhalt-Cöthen. Now, old Leo was a strict Calvinist and didn't go for all that airy-fairy, fancy religious music for which Bach was renowned so that gave Jo time to write a bunch of secular music. We're certainly grateful to Leo for that.

This is the first movement of the Brandenburg Concerto No 2 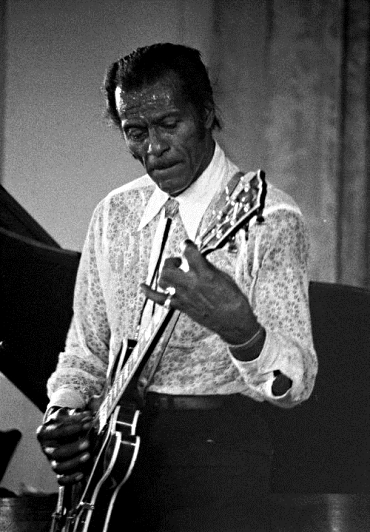 Without Chuck Berry rock & roll wouldn't have developed the way it did. Sure, it would have been around but he pretty much invented rock guitar playing (copping licks from T-Bone Walker, but that's another story).

He also brought witty, intelligent lyrics to the fore in a genre that really didn't go in for that sort of thing until Bob Dylan and The Beatles came along. So, Chuck's place on this disk is well deserved. The song chosen is Johnny B. Goode. 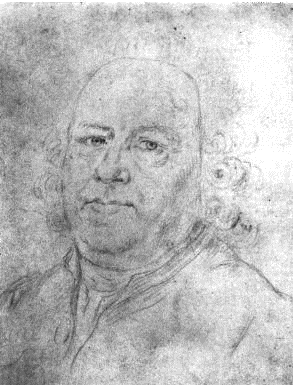 Some more Bach, this time for solo violin. I have already featured a Bach partita for violin in a previous column, but it's a different one - you can find it here. The one today is the Partita for Solo Violin No 3 BWV 1006.

♫ Bach - Partita for Solo Violin No 3 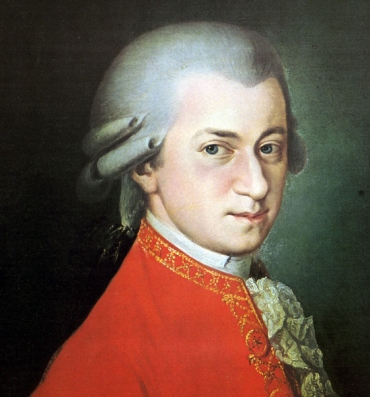 There's only one piece by Mozart on the disk which I believe is a serious under representation. Okay, there's only a finite amount of space for these but they could have lost the bagpipes. If you'd like more Mozart you can find it here.

This is a piece from his opera "The Magic Flute" rather than an instrumental track that I would have chosen but then, no one asked me. This is the Queen of the Night aria.

♫ Mozart - Queen of the Night Aria Louis Armstrong was one of the most influential people in twentieth century popular music which is why he was chosen to be included. He pretty much invented soloing in jazz where before, it was a group effort and with that developed improvisation, something the early classical musicians used to do all the time but was rather forgotten about from the nineteen century onward.

Not just that, he showed you didn't need a "good" voice to sing. That alone set up music in the second half of the century. This is Melancholy Blues. 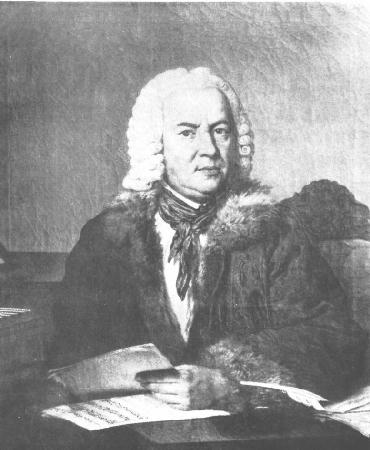 The Bach music keeps on coming. I guess the folks who selected the tracks had a thing about him. I don't blame them. If you are going to demonstrate music to an alien civilisation he'd be the one I'd pick.

This is the always interesting Glenn Gould playing the Prelude & Fugue No 1 BWV 870 on a piano rather than a harpsichord. Bach was always experimenting so I don't think he'd have minded the change of instruments. 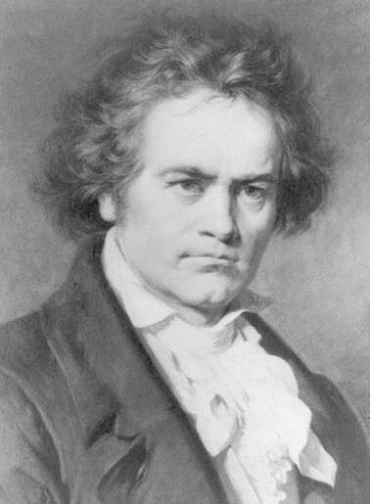 This is the first movement of the Symphony No 5. You all know this one. If you'd like some more Beethoven, besides what's below, you can find him here. Anthony Holborne was apparently in the service of Queen Elizabeth (that would be the first one) according to the title page of a couple of books of his.

It seems that the musicians of his day thought he was pretty good muso himself. He mostly wrote for viols, violins, recorders or other "Musicall Winde Instruments," but The Fairie Round, featured today, is being played on a lute. Tony sure was a stylish dresser.

♫ Holborne - The Fairie Round 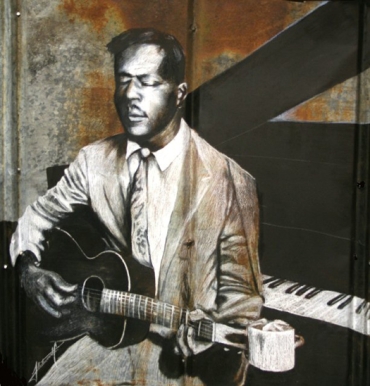 Blind Willie Johnson was one of the great slide guitarists of his era, or any era really. He was also a fine gospel singer. He became blind when his stepmother threw a handful of lye into his face when he was seven. Boy, talk about wicked stepmother.

As an adult Willie would preach and sing on the streets, mostly in Beaumont, Texas. He died poor, but has had a major influence on later musicians – Bob Dylan, Ry Cooder, Led Zeppelin, Beck and The White Stripes have all cited him as an influence. Here he is with Dark Was the Night. 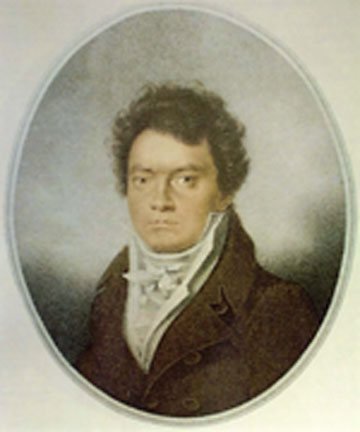 Some more Beethoven, this time with a string quartet. If a string quartet is what we wanted, and it certainly is from my point of view, I'd have chosen Haydn instead. After all, he invented the genre and wrote the finest works in this style.

Okay, Beethoven and Mozart were pretty dab hands at these, but I'd still go for Haydn. Once again, I wasn't consulted. This is the Cavatina, the seventh movement of the String Quartet No 13 Op 130. Trust Ludwig to throw in more movements than were really necessary.

Did you know that Earth has actually received its first message from an alien civilisation? It seems they actually have intercepted the Voyager and figured out how to play the record.

They sent a message in response. It was quite short but even so, it had our best cryptographers scratching their heads for some time. They finally translated the message and it read, "Send more Chuck Berry" (Okay, it's an old joke. Sorry).

What an assortment. I liked them all, but agree with the aliens' message. Send more Chuck Berry!

Very interesting! I always wondered what music was sent out.

Perhaps one day you will compile a list of what would have gone up should you have been consulted on the project and share that! Having said that, one wonders what music would be picked if a recording was launched in, say, 2050 and how it would differ....

Peter, I am so impressed by your musical knowledge and by the amount of time you must spend in putting your posts together.

I am just curious, do you play an instrument? I think with your love of music that you must.

This was a wonderful post with something for everyone. (Well, maybe not CW fans.)

Thank you for all you do.

Peter - May you live long and prosper...

Thanks Tibs - a font of knowledge as always. One of the first things to do on Monday is to check the Elder Music blog.
Keep them coming