All readers are welcome to submit items for inclusion. Just click Contact in the upper left corner of any TGB page to email them. There is no guarantee of publication and I won't have time to acknowledge receipt.

89-YEAR-OLD ELECTED FOR 12TH TERM
Beth McCarthur of Vancouver, B.C. wrote to let me know Hazel McCallion was elected in October to her 12th term as mayor of Mississauga, Ontario.

A couple of years ago, we reported on her election to her 11th term. You can read more about this year's election here and I'm repeating the terrific video interview with Mayor McCallion from 2009:

SOCIAL SECURITY'S FUTURE
In the newly-elected Congress, Republican knives are already being sharpened to slash or kill Social Security. But several surveys taken in August in connection with the 75th anniversary of the program show that it is as popular as ever. A poll conducted for AARP

In addition, half of all non-retired adults said they are willing to pay higher payroll taxes to ensure Social Security for themselves and so would 57 percent of adults younger than 50.

This doesn't mean we can let down our guard when the president's deficit commission issues its report on 1 December and when the new Congress is seated in January.

FOODSCAPES
Take a good, close look at this: 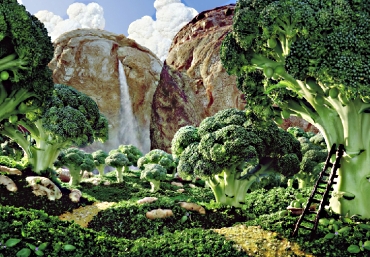 It is, amazingly, a landscape made entirely of food. You can see a lot of more of these creations by Carl Warner at this link. Use the icons below the photos to find even more and some animated foodscapes too. (Thank you and a hat tip to Darlene Costner of Darlene's Hodgepodge.)

NAPPING IS GOOD
Some elders don't nap when they feel sleepy during the day because they fear being branded as lazy. But researchers at the University of Surrey say that because old people wake up more frequently than younger ones during the night, napping can improve their health:

I've recently discovered the restorative power of a nap – not every day, but when I need it. You can read more here.

NO SUCH THING AS TOO MANY CUTE CATS
Time Goes By reader Naomi Shaiken emailed a link to this video and I couldn't resist.

ON RETIREMENT
Blogger Claudia Snowden was kind enough to reference me in a post about her forced retirement. Much more important, she has some no-nonsense observations:

”Adversity makes you stronger--(2) No it doesn't. Solving problems makes you stronger, and sometimes adversity stacks up so deep you're drowning in alligators. You gain strength from learning HOW to solve problems, not get beat-up.”

You can read more at her Fried Okra Productions blog.

DEATH WITH DIGNITY
Oregon, where I now live, has had an assisted suicide law since 1994. With certain restrictions, it allows physicians to help terminally ill patients to decide their own deaths. In 2006, after he was diagnosed with Parkinson's Disease, former governor Booth Gardiner campaigned for a similar law in his home state of Washington which passed in the 2008 election.

This is a video from a 2009 documentary titled The Last Campaign of Governor Booth Gardner which was nominated for an Academy Award. (Hat tip of Alan Genocchio of The Cyberspace Dawdler)

THE UNHOLY TSA
Surely you have read about the new airport body scanners that show everything and further reports that travelers who opt out are subjected to an extremely intimate body patdown from Transportation Security Administration agents.

"As I went through security, who should I see but the Dalai Lama being frisked by a TSA employee," he said. "Now that's what I call misguided concern.”

STILL HERE
After a certain age, many elders check carefully each morning to make sure they're still here. I found this tune - from Stephen Sondheim's Follies - and sung by Carol Burnett on, of all places, Nobel economist Paul Krugman's blog at The New York Times.

It's good to be reminded of Burnett and all that we old folks have lived through and survived.

At The Elder Storytelling Place today, Mimi Torchia Boothby: When I Was Six

Love Hazel! I believe there are many more just like her in N. America. Too bad the media doesn't celebrate these impressive elders. Dee

Yes, I met Hazel way back. An absolute legend. All mayors should be like Hazel, debt free cities, and a sense of humour that slays her constituents.
XO
WWW

I'm here at work and just have time to view one video--so of course it's the cats! Thanks for this! Great way to start up my work day. Really made me chuckle.

My maternal grandparents died within a year of each other when I was about eight. They were both in their mid-sixties and no one at that time would have said that they died "before their time"
Now 68 years later, I read about 89 year old mayors and my tennis partner is 90.
"The times they are a-changin'"

I loved this post with two incredible ladies, Carol Burnett and Hazel McCallion. I do believe that their wonderful sense of humor contributed to their successes and to Hazel's longevity.

The cats were icing on the cake for me.

And about the napping - I wake up more refreshed from a nap than from a nights sleeping.

Can't help but compare wonderful Hazel with the Governor in my state, Arizona. The other day she said - no lie!- that "the CALVARY were coming over the hill" when she was talking about the Republican sweep here. Sigh! Do you think Jan Brewer will be around as long as Hazel? Heaven forbid!

The funny thing about the cats is that they are fighting, not playing. And they're both too lazy too really go at it!