Frank Sinatra didn't write his own songs as Bob Dylan and The Beatles did. He didn't change jazz forever as did Louis Armstrong and Charlie Parker. But my goodness, could the man sing.

He's more akin to Elvis than any of those others. Maybe Bing Crosby. It's reported that Bing once said that "Sinatra is a singer that comes along only once in a lifetime, but why did it have to be my lifetime?" 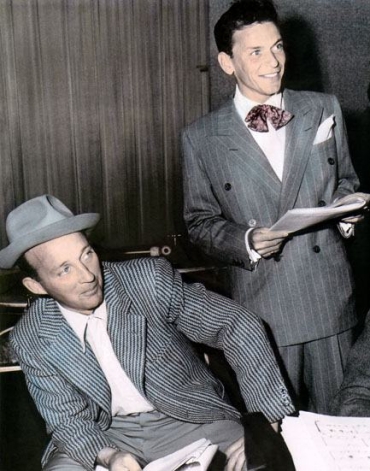 Norma, the Assistant Musicologist, chose these tracks and, as usual, left me to say something about them.

Everyone who normally would be reading TimeGoesBy knows all this, but just in case there are some young folks who have stumbled upon us: Francis Albert Sinatra was born in Hoboken in 1915, an only child.

He was tossed out of school for singing when he was not supposed to. I don't know - if I were a teacher there, I'd have downed chalk or whatever and listened to him.

His mum got him a gig with the Three Flashes who became the Hoboken Four when he joined and after a bit of carry on, Harry James hired Frank on a one year-contract. 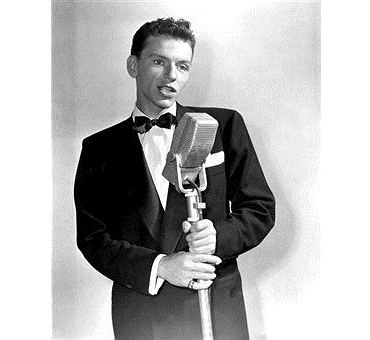 This is a good place to kick off proceedings with one of the very earliest songs. It was originally released just as a Harry James record and didn't do much. A couple of years later when Frank had made it big with the bobbysoxers, it was re-released with his name very prominently displayed. It went gangbusters. All or Nothing at All.

♫ Frank Sinatra - All Or Nothing At All 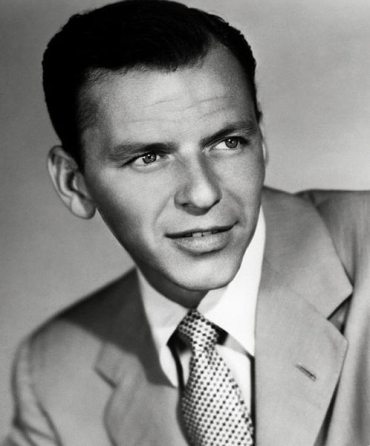 After not a great deal of success with Harry, Frank was asked by Tommy Dorsey to join his group. He jumped at the chance as this was the hot band at the time.

Frank was still under contract to Harry who graciously released him. There are rumors about how this was arranged but I'll skip over that. This brings us to Without a Song. This is actually a track by the Tommy Dorsey Orchestra with "vocal refrain by Frank Sinatra."

The title of the song is nearly prophetic as the instrumental introduction goes on so long that you start to wonder if there is any song at all. Finally it kicks in.

♫ Frank Sinatra - Without A Song

Here we have Frank in nostalgic mode, rather reminiscent of September Song but rather than going for that better known tune, we'll have this instead because the A.M. likes it. It is When the World was Young.

♫ Frank Sinatra - When The World Was Young 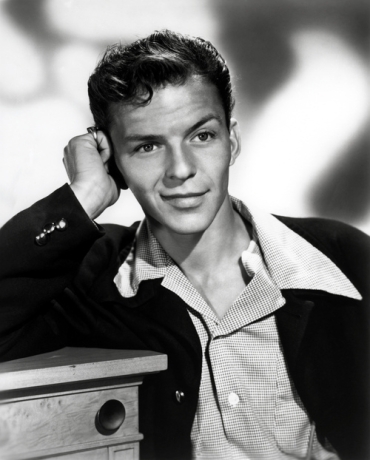 The next is a quintessential Sinatra song that may be the best he's done. I've always preferred the world-weary Sinatra to the happy-go-lucky one. There are several versions of this song, but in spite of the orchestration this may be the pick of the crop.

It's from his classic album "Only the Lonely” - One For My Baby. He does a fine version on the record from which the next couple of songs are taken but the A.M. wanted this one. 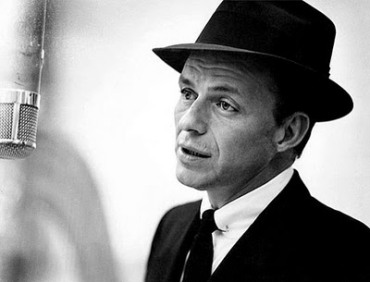 The next two songs are from an album with which you may not be familiar. This was recorded here in Melbourne and called "Live in Australia 1959" but only released a few years ago.

It includes the Red Norvo Quintet and some local musicians. Red plays vibraphone which is far from a favorite instrument of mine, but as it's such a fine album I can overlook that. Obviously the A.M. did as well as she's chosen a couple from it.

These are songs you'll know. The first is The Lady is a Tramp, which just had to be a live version she said.

♫ Frank Sinatra - The Lady Is A Tramp 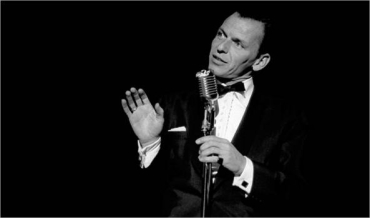 Night and Day is a song Frank first recorded with Tommy Dorsey and kept returning to. Bit too much of the vibes for me in the early part of the tune, but still a great song. 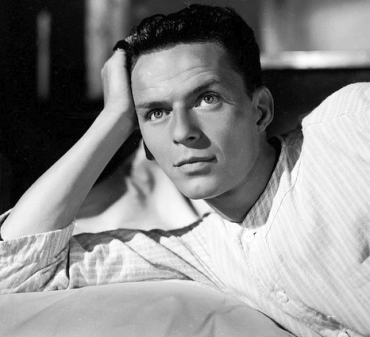 Later in his career Frank recorded an album called "I Remember Tommy," paying tribute to Tommy Dorsey who really set him on the road to stardom. The album has a number of songs he originally recorded with Tommy and it was appropriate that something should be included from this one.

This was the best of them, East of the Sun (And West of the Moon).

♫ Frank Sinatra - East of the Sun (And West of the Moon)

I'll finish with a couple of duets. This is something Frank didn't do very often. The first of these is with Bing Crosby and it's from the film "High Society" that was based on an earlier, superior film, The Philadelphia Story.

However, when the music gets going in the later film it was certainly worth watching, particularly Frank and Louis Armstrong. Bing wasn't bad either when he wasn't being too soppy (something he was prone to do in the film). This is Well Did You Evah.

♫ Frank Sinatra and Bing Crosby - Well Did You Evah 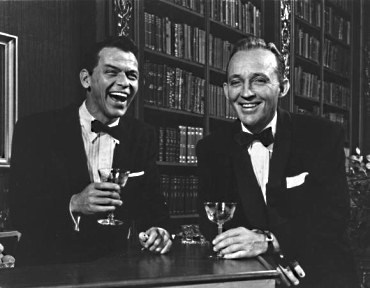 It's really a bit a stretch to call this next track a duet. Late in his life, Frank recorded a couple of albums called "Duets" however, he was never in the studio with the other half of the duet. His part was pretty much phoned in.

We've included this is as it gives us an excuse to play Linda Ronstadt and we'll always do that whenever we can. 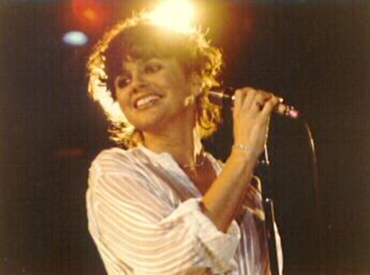 This is Moonlight In Vermont.

Thank you.
Moonlight in Vermont - beautifu.

OMG! I'd momentarily forgot that magnificent voice & with Linda, sooo lovely. Thank you Peter for the reminder that "Only the Lonely" helped me thru the pain of my first lost love. I don't think there will ever be another Frank, at least not in my lifetime. Thanks to you & A. M. for this. Dee

I wish my computer weren't sick. I don't have sound and can't listen to all of these wonderful songs of my youth.
I will come back to listen when I have sound again.

Frankie was the first guy to have the 'bobby soxers' screaming when he sang. There was a big argument going on when Frank Sinatra first came on the scene as to who was the better singer; Frank or Bing.

Frank would have been a great singer if his voice had been more powerful. Unfortunately, his voice was not strong and that limited him. He did okay in spite of it. ;-)

Dee got it right...I'd almost forgotten how velvety rich Linda Ronstadt's voice is.

As for Darlene's comment that Frank would have been a more powerful singer except his voice wasn't stronger--maybe, but I'm sorta glad--no, very glad--it turned out that way! I've been listening to Frank recently since I dug out my Christmas music last week. No male singer does a better job with the Christmas Waltz. I would agree with your assessment that One For My Baby was probably his best recording, but then I'd hear another from my collection and insist on adding one more and then one more at no end to the list. It was a lovely time listening to these mellow sounds while Hubby's watching what sounds like football. Thanks for a nice mellow Sunday morning.

One more muse, then I'll quit. I was thinking as I heard Bing and Frank sing holiday music all week. If they could come back and tell us something significant to use in our lives, what would it be? Well I thought it might be that Frank would tell us that Ava was just another woman, albeit a beautiful and reckless original like he was, and Bing might say he wished he hadn't been so hard on his boys.

I am long overdue for some focused listening of Frank Sinatra, that is for sure. I really appreciate the opportunity. And how startling to hear the power in Linda Rondstadt's voice! She deserves some serious listening by me, as well, I realize! Beautiful music...all of it...thank you!

I loved everything about this post, the words you wrote, the photos of "Old Blue Eyes"and all those wonderful songs!!

Thanks for making my Sunday!!