This morning President Obama is signing the repeal of the "Don't Ask, Don't Tell" (DADT) policy that has forced gay and lesbian U.S. soldiers to hide their private orientation if they wished to stay in the military.

In force since 1993 and considered a moderate compromise when first enacted, the gay ban made honest troops to live a lie and caused horrible anguish to gay families, especially as war deployments became long and frequent.

Good riddance to a stupid and cruel policy - defended by Republicans to the end, I might add. 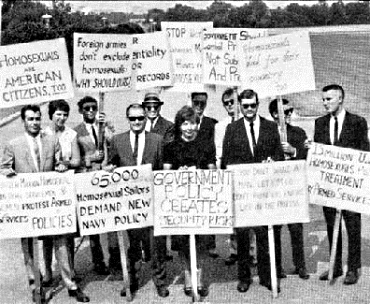 The struggle to serve openly in the military is not some new-fangled innovation. Gay people and friends have been working for this day for a very long time. The photo above shows a 1965 protest at the Pentagon asking for the right to serve. My, weren't we careful to try to look conventional in those days! 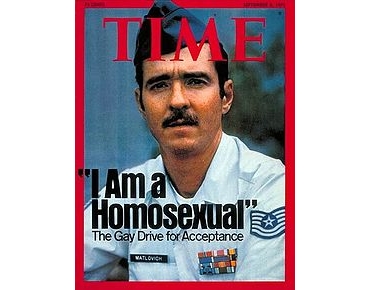 Technical Sergeant Leonard Matlovich carried on a long legal battle in the 1970s to stay in the Air Force after coming out. Though his exemplary record stirred much support, he eventually lost his case. He ended up running a restaurant in the resort town of Guerneville north of San Francisco. (We often ate there when passing through.) 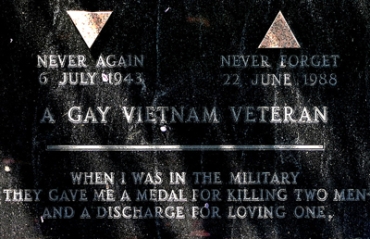 Like many gay men of his generation, HIV/AIDS killed Matlovich. His tombstone in a Washington D.C. cemetery reads "When I was in the military, they gave me a medal for killing two men and a discharge for loving one." 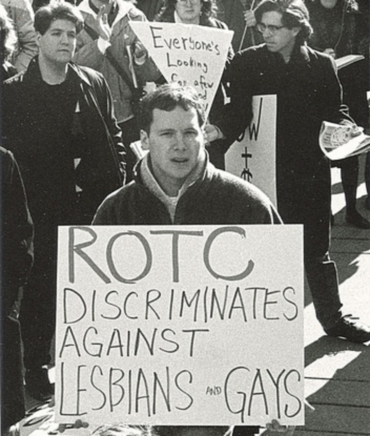 One of the collateral effects of the ban on gays in the military was to make the ROTC program in which the military trains officer candidates while they are still in civilian colleges seem deeply illegitimate to more progressive academic institutions. The students above were protesting in 1990 at the University of Wisconsin.

Though in recent years many institutions that once excluded ROTC have allowed it to return, repeal of the ban almost certainly will lead to restoration of ROTC at any institution so inclined - though the program will continue to face protests that it is feeding illegitimate, ill-defined wars. 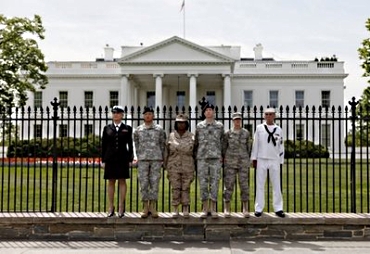 Like many (most?) groups that supported President Obama's election, LGBT activists have often questioned his commitment to advancing our concerns without compromising them fatally. Members of the advocacy group GETEqual organized veterans to handcuff themselves to the White House fence to push for repeal last April.

There was little trust that the President would get this done if gay people and friends let up for a minute. So they didn't.

Today we thank the president, Senator Harry Reid who worked all the ins and outs of the Senate for this, Speaker Nanct Pelosi who has been right about this for a long time and above all, the activists who insisted that the ban on gays in the military undermined our full citizenship in the country of our birth and affection.

This change had to come; brave people made it so and our leaders have followed.

This is never been my highest priority issue, Though I understand why winning equal treatment for gay people in the military is a necessary part of my full citizenship, I worry more about the uses that irresponsible (and sometimes stupid) political leaders make of our military, invading other people's countries without cause or rational plan and failing to disentangle when the going would be good. But that's about the politicians.

I also worry more about all veterans - the least we could do as a country after we use them up is take care of them when they come home.

It has just been revealed that the Pentagon Health Plan is balking at providing brain damage therapy to returning troops. It costs too much, they fear.

Vets I know say just about everyone who saw combat comes back with some brain impairment these days - human beings aren't wired to endure ongoing, massive explosions even if their limbs come out intact.

But today, let's celebrate one small victory for full inclusion that brings our country more in accord with its ideals - and then we can regroup to pursue other causes!

At The Elder Storytelling Place today, Lyn Burnstine: Christmases Past

It was one of the few good news pieces to come out of this lame duck Congress. And now it looks like the START treaty will also pass and possibly on the same day that Obama signs the bill ending DADT. It's hard not to be depressed in general about our politicians but this was a rare instance where they finally did what was right... most of them at least. Some, well there's no hope for them and I can only hope someday their constituents will see what they don't do and choose someone else to represent them... It is the season to believe in Santa Claus ;)

I just watched President Obama sign the repeal of DADT. He gave a barn burner of a speech like I haven't seen him do since the 2008 campaign.

It was a wonderful moment for gays and lesbians and for American ideals.

At last there was this one piece of good news in the midst of so much bad.

Now we must start to fight for the equal rights for gay people to marry and enjoy the benefits that come with marriage.

I hope the neanderthals fade into the background.

Encouraged by Ronni's comment, I just watched the video of the signing, available here. Obama was in fine form indeed, perhaps enjoying being President more than he usually gets to these days.

Such relief in this. I am certain that repeal of DADT, that cobbled-together impossibility, will serve to further legitimatize the rights of LGBT's in this crazy country. Gradually, I expect it will make subconscious inroads into the minds of even the homophobes.

Years from now, when people look back on this, they're going to wonder what in the world was wrong with us that it would have taken so long to remedy, just as I wonder how my ancestors could have wished to own people.

I think military enlistees should be provided an itemized list specifying all the medical disabilities they might incur for which our government will not provide them care -- i.e. brain damage. Criminal!
American people should be outraged.

Glad DADT finally going through -- so ridiculous this was made into the issue it was.

It is sobering thought to know just how many fought and lost before Mr. Obama finally signed the repeal. It is not necessarily a moment of celebration for some, but a moment of recognition for those who have suffered over the years. Thank you for sharing your thoughts.