All readers are encouraged to submit items for inclusion. Just click Contact in the upper left corner of any TGB page to email them. There is no guarantee of publication and I'm sorry I won't have time to acknowledge receipt.

I've inflicted a lot of heavy, discouraging reading on you this past week – not that it isn't crucial to know – and I have a feeling upcoming events aren't going to make it any better. So a breather is in order.

Fair warning: this edition of Interesting Stuff may raise the blood sugar level of cat lovers. Cat haters might notice a spike in blood pressure. I've scattered some non-feline items in the post to temper these effects. But first:

Yesterday, the House of Representatives refused to bring President Obama's tax deal to a vote. There is no way to know if ours and others' calls and emails to our representatives had anything to do with it and this is not the end of the proposal in Congress. But let's let that go now until next week.

WESTBORO TO PICKET ELIZABETH EDWARD'S FUNERAL
“Picket” does not begin to describe Westboro Baptist Church members' odious behavior. Twice in the past editions of Interesting Stuff, I've highlighted stories of local citizens who gathered at military funerals to protect mourners from the church's obscene signs and shouts.

Now Westboro has announced it will protest Elizabeth Edwards' funeral tomorrow, Saturday. Any readers who live in or near Raleigh, perhaps you can join others to help keep church members away from Mrs. Edwards' family and friends.

SINGING CHRISTMAS KITTIES
Total feline silliness from Cowtown Pattie of Texas Trifles. Well, there are a couple of dogs, a bear, a hampster and some other animals too. (Someone – apparently with a lot of time on his hands – spent many hours putting this together.)

REDESIGNED SOCIAL SECURITY WEBSITE
For all the years I've been using it the Social Security website looked and functioned as though it were designed in the stone age. At last, it has been updated and is much easier to use. Check it out.

LOST KATRINA KITTY RETURNS FIVE YEARS LATER
How's this for heartwarming - in the chaos that was Hurricane Katrina, Scrub the cat disappeared. Now, all these years later, he was returned to his owner thanks to an implanted microchip and Scrub is home just in time for the holidays. 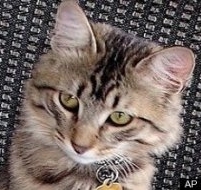 “By the end of the first night back, Scrub had snuggled in bed with one of [owner Jennifer Noble's] boys.” Read more here.

THE NEW CONGRESS
The Washington Post has launched a new wiki, Who Runs Government, to help make sense of the new 112th Congress which will be seated in January. There are profiles of legislators, their aides, organizational charts, and much more. You can catch up on it all here.

80 OVER 80
Slate has issued their “annual catalog of the nation's silver lions.”

”Fourscore elder statesmen, titans of industry, cultural icons, and notorious newsmakers who have remained influential into their ninth decade and beyond. As always, we've ranked these still-twinkling stars according to their power and importance.”

You can see and read about them here. (Hat tip to Donna Woodka of Changing Places blog.)

CAT KEEPS ALLIGATORS AT BAY
If those Christmas kitties above are a little too treacly for you, wait till you see this cat take on a couple of alligators – wait for it; there is a startling moment about 1:14 minutes.

WHY HUMANS LIKE PUZZLES
Puzzles are ancient and universal – pretty much everyone likes them and now scientists, being what they are, have been searching for the reasons we enjoy them.

“The very idea of doing a crossword or a Sudoku puzzle typically shifts the brain into an open, playful state that is itself a pleasing escape, captivating to people as different as Bill Clinton, a puzzle addict, and the famous amnesiac Henry Molaison, or H.M., whose damaged brain craved crosswords.

“And that escape is all the more tantalizing for being incomplete. Unlike the cryptic social and professional mazes of real life, puzzles are reassuringly soluble; but like any serious problem, they require more than mere intellect to crack.”

Reading this story at The New York Times is almost as much fun as a good puzzle.

ADORABLE BABY JAGUARS
With their mom. What more is there to say than adorable. From Spain's Tenerife zoo.

There are no strings attached and the free books are available until midnight CST on 31 December 2010. You'll find the download offer at Rick's website. Scroll halfway down the page.

OBAMA TAX DEAL FOR WONKS
This story, titled Why the Obama Tax Deal with Republicans is Insane is long and packed with graphs and wonky details. But it is also an excellent history of how our economy got to where it is now written in language anyone can understand.

If you have the time and interest, I highly recommend it. You'll find it here.

CAT AND CROWS
A week or so ago, there was a viral video making the rounds of crows attacking a cat. You can see it here.

But I've got an much better cat and crow video for you. A story of an unexpected friendship.

Wow, excellent and needed things to find time and go click the links given to read.

All of them sound very interesting to me, and you did the research for us. Thank you.

The last video reminded me of a blog post I wrote years ago about the special relationship between my dog and a tiny kitten we had found. Link is provided if anyone wants to read it.

I will have to come back later and view the videos.

Tomorrow at about 11am, I have to drive right by the church where Elizabeth's funeral will be held. If I see any Westboro people, my tendency will be to plow into them - but I will restrain myself. They deserve long, slow deaths - not vehicular homicide.

What is the purpose or the point of protesting Elizabeth's funeral. I'll have to click on the link, ugh, that behavior is just reprehensible. The videos, fun to watch but the crow and the cat video touched my heart and brought tears to my eyes. How beautiful and very heart warming. Thanks.

What great videos--especially the cat and the crow. Thanks for posting them.

I am proud to say that, many years ago, I successfully launched a tomato at the Westboro people when they were picketing my friend Randy Shilts' funeral. Randy was a very good journalist here in San Francisco.

The kitten and the crow story is awesome!

The Westboro Church is insane.

Note to Jan: High five for a well-planted tomato!!!

Enjoyed the videos, sent the job info on to friends. Hooray Jan for the tomato! The Westboro loonies are beyond despicable.

Being a cat person, I always love cat stories and these were great, especially the one about the Katrina cat being reunited with his owner. As far as the Westboro folks, what a thoroughly disgusting bunch they are. I'm not at all religious and people like them are part of the reason. In my view there's far too much judgment and hypocrisy practiced by the followers of most religions. Picketing military funerals (and Elizabeth Edwards')! How presumptuous can these folks get? They'd better d%#* well hope their god is a lot more tolerant, open-minded and loving than they are or they might be very unpleasantly surprised at the Pearly Gates.

Thanks for the smiles, Ronnie.

I've seen the cat and crow video a number of times before and it never gets old. It is an all-time favorite along with one other similar story I heard this past year broadcast on CBS' "Assignment America" about an elephant and a dog. It also is a must see if you haven't seen it.

Great post. I'm generally in agreement with your political posts, but I get so worried/depressed about the state of our country-as I guess we all should be.

But lots of enjoyment and some new computer bookmarks out of this post.
Crow/cat video is wonderful and I like the Who Runs Government site.

But, what dirty, rotten scoundrels to picket Elizabeth Edward's funeral. What can possibly be their purpose? Just being good Christians, are they?

Thank you - Ronni for this most interesting of posts.