I've already done a couple of columns on guitarists I like, you can find them here and here, so it's time to get out the old johanna and tinkle the ivories.

Before I began this column I would have thought that guitarists were more different from each other and it was easier to tell them apart than it is with pianists. After listening to the tracks for this I'm not so sure any more. These are quite distinctive.

The obvious place to start is with the one I like to listen to a lot, Thelonious Monk. 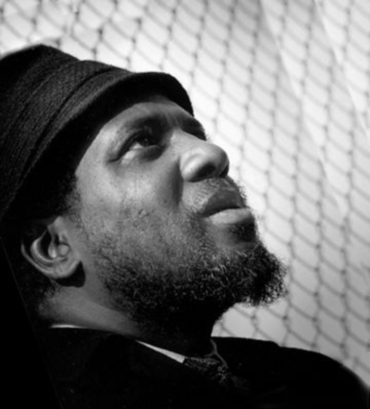 Monk's style of playing is very recognisable. He was not afraid of dissonance and his approach to the piano was percussive with abrupt changes, hesitations and he used silence as well.

It takes a bit of getting used to but patience is rewarded. Monk was highly regarded by his fellow musicians and was often asked to play on their records. He returned the compliments when he became famous. Here he is with his quartet playing Hackensack.

I first encountered Bill Evans as a member of the Miles Davis Quintet around the time Miles did Kind of Blue. 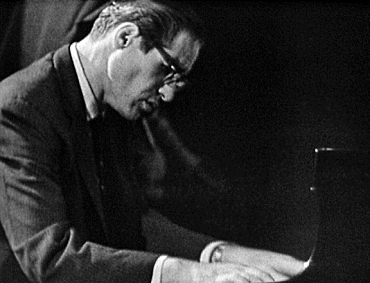 Bill was another jazz muso who started out classically trained - not just the piano but violin and flute as well. He was playing jazz while he was learning the classics and decided to stay with it.

He was in demand as a sideman throughout the Fifties. His stay with Miles was brief, just eight months, but that was an extremely fruitful time. Miles, never one to give praise needlessly, said of him:

"Bill had this quiet fire that I loved on piano. The way he approached it, the sound he got, was like crystal notes or sparkling water cascading down from some clear waterfall. I've sure learned a lot from him. He plays the piano the way it should be played."

This is the Bill Evans Trio, recorded at the Village Vanguard, with Some Other Time.

♫ Bill Evans - Some Other Time

Dave Brubeck is pretty much mandatory in a column such as this. 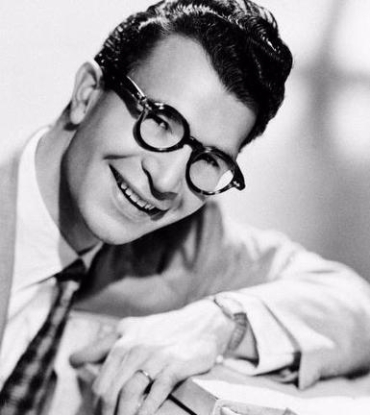 Dave wanted to be a cattle rancher and, indeed, studied zoology at university for a time until his lecturer suggested he switch to music as that was where his heart and mind was.

His two older brothers were musicians which was why Dave originally thought he'd do something different. Not too different. as his dad was a rancher. He served in the army during the second great unpleasantness where he met Paul Desmond. After the war (eventually) they started a group together that became pretty successful.

This is a track called Marian McPartland by the Dave Brubeck Quartet. However, this isn't the classic quartet from the Sixties with Paul; it's a completely new one. Well, not completely new, Dave's still in it.

If you'd like to hear some Marian herself and some more Dave you can find them here.

Now to rock & roll and the first pianist in that style, Fats Domino. 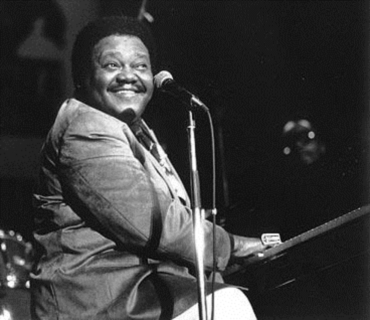 Antoine Domino was born and bred in New Orleans and has lived his life in that city. Indeed, he decided in the Eighties not to leave town as he could perform there and live comfortably off his royalties. There was a glitch when Katrina hit and his house was flooded but he's back again.

He had dozens of hits from 1949 onwards, so it's almost impossible to pick out a single track for Fats but I'll do my best. This is The Fat Man from the beginning of his career.

Little Richard may not be the best pianist ever, but don't tell him that. However, no one performs like he does. 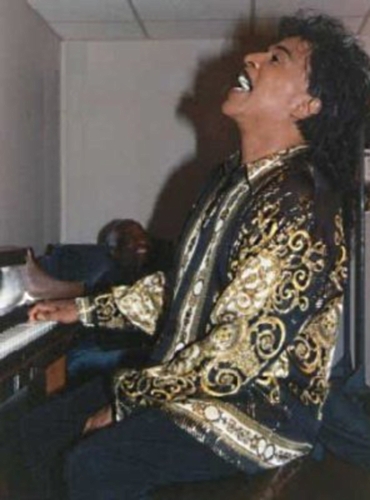 The Georgia Peach was born Richard Penniman in Macon. He blew the lid off the staid Fifties with his explosive music and his charisma. Few could match him and he is one of only two or three people who laid the ground work for rock & roll.

He often gave up rock & roll as he considered it sinful (or something). He just as often returned to it, and for that, I thank him. Indeed, the first time he did that was in Sydney where, rumor has it, he threw his diamond ring and other jewelery off the Sydney Harbor Bridge.

This was in response to the launching of the first Sputnik; he thought that the end of the world was nigh. Can't see the connection myself. People still search for these (no doubt imaginary) trinkets.

This is Richard with one of his famous songs, Good Golly Miss Molly.

The other wild piano player of early rock & roll is Jerry Lee Lewis. His style owes much to the black artists who performed around about in Louisiana where he lived. His mum enrolled him in the Southwest Bible Institute figuring he'd only be playing religious songs. He certainly did some of those, but rocked them up. He was asked to leave (that's being polite about the whole event).

His recording career, like that of several early rockers, started at Sun Records. It was there he recorded the songs for which he is most famous, and this is one of them – Whole Lotta Shakin' Goin' On.

You don't usually associate the piano with country music, but there have been a number of fine pianists in this genre. In my opinion the pick of them was Floyd Cramer. 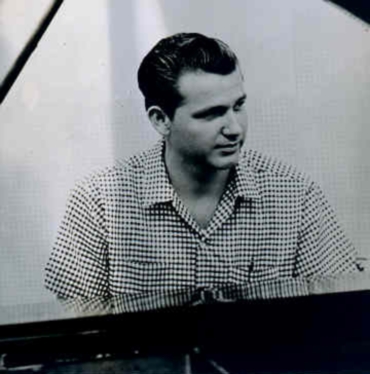 His style was so distinctive that I can listen to a country track and say, "That's Floyd.” I haven't been wrong yet. Besides playing on every country record in the Fifties and the Sixties, Floyd also had several hits of his own at that time. One that stands out is Last Date.

In the way of these things back then, someone wrote some words to this tune and had another hit with it. Indeed, somewhat later Emmylou Harris performed it and named one of her albums after it. This is Floyd's original version.

The pianist I probably listen to the most is Glenn Gould. 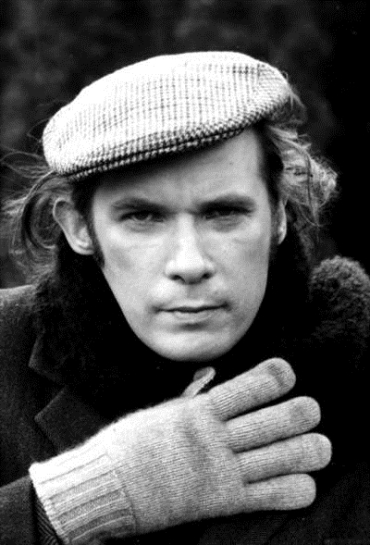 Glenn's mum always intended her son to be a classical musician. Even before he was born she played classical music to him (well, probably for herself, I imagine). That seemed to work as that's what he became.

He entered the Toronto Conservatory of Music at age 12 and gave his first public performance the following year. From then on there was no holding him. Unfortunately, he suffered a severe stroke and died at age 50.

Glenn is most noted for his interpretations of Bach's keyboard works, but he does a good job with Haydn as well. I'm going with some Bach. This is from the Well-Tempered Clavier Book 2. It's No. 4 in C sharp minor, BWV873. This is the prelude.

And this is the fugue.

Daniel Barenboim has released many terrific sets of CDs. At the top of the pile are his complete Mozart piano concertos with the English Chamber Orchestra. Also in the mix, again with Mozart, are the sonatas for violin and piano with Itzhak Perlman. Anything from these would be worth including and that's what I'm doing - choosing something is the tough bit. 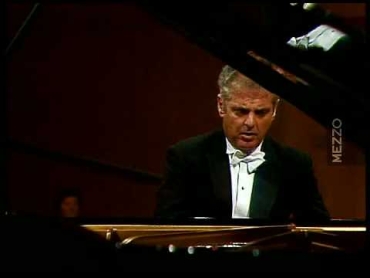 Although born in Argentina, Daniel now lives in Berlin. He's a bit greedy inasmuch as he has four different passports – Argentina, Spain, Israel and one from the Palestinian Authority. Those should get him to most places.

He is one of the greatest pianists in both the 20th and 21st centuries. This is the first movement of Mozart's Piano Concerto No. 11 in F Maj, K413.

Beautiful blog, Peter. How about Sir Elton, though? He's deserving to be on your list as well.

There are so many great musicians, so little time.

What a great ride down a musical past. Wasn't real familiar with Bill Evans and really wasn't into Monk and Brubeck as a youth that much, but I think I liked Fats Domino before I did any other rock and roller and still consider his sound the premier boogie woogie sound that evolved into great later renditions like Lynyrd Skynyrd's "The Breeze"

And Little Richard and Jerry Lee Lewis are unsurpassed too for their gritty style playing.

That was a wild journey over the ivories - an "E Ticket" ride! I thoroughly enjoyed it. Thanks!

Know and like all of them.
BUT what happened to Oscar Peterson? Top of the list!
Love, love, love him. He can
NEVER, NEVER do anything wrong!

About ten years ago I bought a Fats Domino CD box. The big surprise for me was his amazing piano playing. Professor Longhair was more creative, more 'out there' - but no New Orleans-style pianist was more 'in the pocket' than Mr. Domino.

You know I'm messin with ya, yeah?

Thanks for the memories, Mr. Tibbles. I was a big fan of Brubeck in the 50s as well as Little Richard and Fats. And I just found the 1968 digitally remastered recording of Beethoven's concertos performed by Barenboim/Klemperer that I'd been looking for the past several years. My ex made away with the original LP album. Life is good.

I completely forgot about Bud. He should have been there.

Don't forget Erroll Garner, McCoy Tyner (Oscar Peterson and Bud Powell have already been mentioned) and for a different take on Barenboim listen to his wonderful Tango album.

...and Albert Ammons for boogie woogie.

....and consider Errol Garner. He was the eye opening keyboardist for me.

What a joy this post was. From Monk to Barenboim. I loved your selections; especially Brubeck, Monk and Evans for jazz and style.

The three classical selections were superb.

I am not a fan of Little Richard or Fats Domino; I prefer jazz pianists like Ahmad Jahmal. And I agree with the others: Oscar Peterson should head the list.

I think I have noted before that I was lucky enough to see Brubeck and Desmond preform in person. I also saw Ahmad Jahmal at a small club in L. A.

You should listen to some Dave McKenna piano, he is - was (passed away somewhat recently) a great stride piano player. Played a lot of standards and jazz with Woody Herman, Charlie Ventura, Bobby Hackett and other small groups. Delightful to listen to in small settings and a very low key, non showman type character. Played in Europe and Japan and even in my small hometowm - the Albany, Schenectady area of New York State. Miss him a lot!

My hubby and I like Dr. John's music. Never cared for Jerry Lee Lewis but the rest of the artists in this post are great.

Bill Evans, Brubeck, Monk and Gould are special favorites of mine. Good selections from my perspective.