A BROKEN BLACKBERRY
Wonderful comedy sketch for computer users from a show on BBC One. Thanks to reader Jane Oestreich for this.

COMPUTERS CONFUSE YOUNG PEOPLE TOO
Elders regularly take a beating from the young about their lack of computer skills. But before I get to that, take a look at this cartoon video about an accomplished user watching a novice:

As you might expect, when this video was posted to BoingBoing, a lot of readers related stories about their how parents and grandparents drive them nuts doing things the hard way. What was more interesting, however, were the number of comments like this:

“It's not generational, either - my twin sister consults me for advice just as often as our 73-year-old father or 47-year-old roommate.”

“I'm 53 and most people that I know rely on me to be the computer whiz. It's a bit disturbing when twenty-somethings don't know the basics.”

“Actually, I've learned that even "teh young" can be awfully ignorant when it comes to computers. I'm constantly surprised by the number of teens who can't figure out how to use Skype...or how to post a photo to a Facebook album.”

STATE TOLERANCE RANKINGS
In observation of Dr. Martin Luther King, Jr. Day, The Daily Beast published a ranking of all 50 U.S. states by tolerance. Hey, Frank Paynter: Wisconsin came in as the most tolerant state in the nation.

Wyoming came in dead last, the most intolerant state. And mine, Oregon, is ranked number 26. You can read the criteria for how states were judged and find your own state here.

ADORABLE LITTLE GIRL RE-TELLS WINNIE THE POOH
This is so cute you'll go weak in the knees. She's explaining Winnie the Pooh, but adds her own wonderful set of embellishments.

BANKSTERS SCREW HOMEOWNERS AGAIN
If Bank of America holds your mortgage, you need to know this:

“Consumers who use the bank's online payment tool, Mortgage Pay, will risk a $6 fee if they fund payments using another bank's checking account and the payment falls during the final six days of the traditional 15-day grace period. Consumers who make payments from Bank of America accounts are not subject to the fee.”

As noted in this report, the new fee structure comes when big banks are increasing fees for checking accounts. Of course, you can avoid the possibility of a fee by paying through your own bank's online bill-paying service.

SENATE LEADER HARRY REID ON SOCIAL SECURITY
Aside from Senator Bernie Sanders (see Thursday's post), elders' best friend in Congress is Harry Reid and as leader of the Senate, he's got the power. We're going to need him in the coming months: 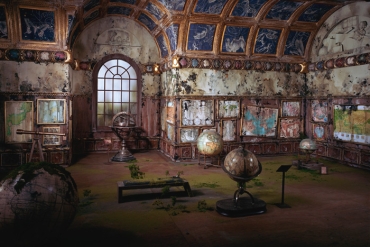 Looks like a library in an old house, doesn't it? Maybe as old as Leonardo DaVinci's. But it's not.

It is a diorama built to scale and photographed by artist Lori Nix - one of 18 in a still-growing series she calls, The City, which concerns itself with apocalyptic images.

”With The City series I have moved indoors, creating architectural interiors,” she writes. “This has proven most difficult yet most rewarding. Currently it takes about seven months to build a scene and two to three weeks to shoot the final image.

“I build these in my Brooklyn living room. I have miniature power tools throughout the apartment, a chop saw under the kitchen table, a miniature table saw on top. The computer room doubles as a model mock-up room.”

The images are as beautiful as they are disturbing, and astonishing in their detail. You can see the photos at Ms. Nix's website where there are several other photo series.

PORTLANDIA
My birthplace and home once again after 55 years away, Portland, Oregon, has a reputation for being weird and residents like it that way. Mainly, “weird” means retro-hippie - sometimes in some places, it can feel like you've slipped into a time warp and landed in 1971.

Here is the first, 30-minute episode titled, “Farm,” which is as weird as Portland itself can sometimes be. Oops. This episode is no longer available online. You can read about the show and view some clips here.

Fun, and interesting as always.
Thank you.
Nice start to yet another cold day here in the frozen, snowy north land.
Thought I'd remind you of what you left behind.

As usual, I am charmed and enlightened. Now too, I can pronounce crocodile in French.

I've never seen a study on this, but I'll bet a taker a lunch that either education or wealth, or both, is a better predictor of computer skills than age. Although we'd have to define "computer skills." Seems to me I'm way more savvy than my 20-something nephews in software and Internet use, although they leave me in the dust on music, TV, and games technology.

The little girl with a big imagination is just adorable.

Bless Harry Reid for standing up for the truth.

I enjoyed the videos; especially the little girl and the computer cartoon.

Yea Harry Reid. I was also fascinated with Lori Nix's creations. I love minatures and am building a house right now with my grandgirls. Lori's art is so rich. Thanks for the link.

I watched Portlandia because my son lives in just that kind of Portland. It's not a show that will appeal to everyone, but because I have one of those currently unemployed nerd sons, I got a kick out of it.

Wisconsin may be the most "tolerant" state, but I gotta say that a lot of people call us Wississippi. Manufacturing is on the decline, illiteracy is on the increase, rednecks and racists really abound. Heck, in that Daily Beast article did you see how many people believe... oops, maybe I better not be intolerant of other people's beliefs. Isn't the whole idea of "tolerance" built on the hidden assumption of superiority? As in, "I'm so cool I can tolerate you." Just getting along happily unaware of many of these distinctions--race, sexual preference, religious preference--distinctions that might require "tolerance" seems like a good target to aim for. Anyway, I've long been proud of my home state, but over the last few decades I've watched our values erode with the rest of the country. People don't even consider it a privilege to pay taxes anymore and home schooling is on the rise. Things could be a lot better!