OLD LADIES PLAYING IN THE STREET
As Colleen Skinner of Meanderings said in the email she sent with this video, “Something to do when we're old and lonely.” Watch and giggle.

PREVENTING FALLS
We all know that falling is a serious affliction of elders and can be deadly. Now, according to The New York Times' New Old Age Blog, t'ai chi has been added to medical guidelines in the U.S. and Britain as an effective way to help prevent falls.

BORED HEADLINE WRITER HAVING FUN???
Does anyone else think at first glance that this New York Times headline is about a couple of Chinese attorneys and not superstitious ones?

In a Field of Reason, Lawyers Woo Luck Too

I think I once ate a Chinese restaurant with that name.

POLITICAL WISDOM FROM AN ELDER
You may have read about the publishing sensation in France, Indignez-vous! written by 93-year-old Stephane Hessel who was a resistance fighter during World War II.

With the revolutions in the middle east (not to mention our own Wisconsin), it takes on greater significance and an English translation is now available from The Nation magazine, but only if you are a subscriber. There is a short excerpt here and longer story about the author and the essay here.

“To you who will create the twenty-first century, we say, from the bottom of our hearts,

“TO CREATE IS TO RESIST.
“TO RESIST IS TO CREATE.”

GRANDMOTHER FOILS ROBBERY
Here is a video that went viral about 70-something Ann Tilson who used her pocketbook to stop some robbers.

Stories about old people physically standing up to crime or injustice are not uncommon and what I like about them is that invariably, when the elder is asked about their audacity, they shrug as though saying, “Wouldn't anyone do this?”

WHY WALL STREET GOES UNPUNISHED
The initimitable Matt Taibbi is back in Rolling Stone with a new story explaining why no one has or ever will be prosecuted for bringing down the world's economy.

“The mental stumbling block, for most Americans, is that financial crimes don't feel real; you don't see the culprits waving guns in liquor stores or dragging coeds into bushes,” writes Taibbe.

“But these frauds are worse than common robberies. They're crimes of intellectual choice, made by people who are already rich and who have every conceivable social advantage, acting on a simple, cynical calculation: Let's steal whatever we can, then dare the victims to find the juice to reclaim their money through a captive bureaucracy.”

The entire story is long and worth every minute of your time.

HOW FLYING USED TO BE
Many of us have mentioned here that because it is so painful, cramped, tiring and just plain ugly, we do our best to not get on airplanes. Look at how it once was on the flying Clipper ships in the 1930s and '40s: 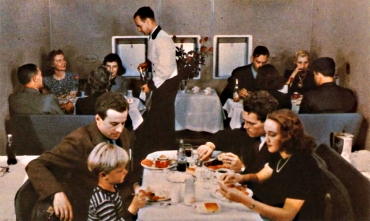 Planes were slower then and there were even individual sleeping compartments. See more photos here.

TALK ABOUT INFORMATION OVERLOAD
By now, most of us are accustomed to electronic measurement by megabytes, gigabytes and even terabytes. But wait till you read this:

”[R]esearchers calculate that humankind is able to store at least 295 exabytes of information...

“In 2007, humankind successfully sent 1.9 zettabytes of information through broadcast technology such as televisions and GPS. That's equivalent to every person in the world reading 174 newspapers every day.”

Confused about exa- and zettabytes? Thankfully, Wikipedia provides a nice chart of explanation. And you can read the original story here.

JUST SHOOT ME
Sometimes I think I will die right on cue when I can't stand U.S. culture anymore. What are they thinking with a full line of make-up for eight-year-olds?

“This is mascara, blush, lipstick, the works. The product line’s 69 offerings even include anti-aging products like antioxidant-loaded exfoliants for extra smooth and healthy skin...”

SATURDAY IS NOT FINISHED UNTIL THERE IS A CAT
Or 10,000 of them. I saw this commercial a long while ago and had forgotten it. I may even have posted this before. I still love it anyway.

I want to go play in the street!

Yes, I admit it. I just shared the cat herding link on Facebook.

I always look forward to these "Interesting Stuff" sections of yours. I'm glad you included the piece of the "super granny". I was just blown away with that when it came out about a week ago. To think she was the only one among all the bystanders that through herself in to this.

Also, thanks for the Matt Taibbi piece. He's always worth reading.

Kaiser Permanente has done some good work in fall prevention. Here's a resource guide published for their Hawaii patients:

It has links to national on-line publications and resources.

G and I were howling with laughter over those two ladies. Great stuff. Then you herd us out into the great USA with a grin on our faces.

I love this feature. The ladies with walkers are wonderful.

I saw the NYT headline, and like you I think I have eaten at Woo Luck Too.

I have to agree with Mage...great stuff and well organized. Thanks for all of it!

The two featured elder ladies are an inspiration to me; Ann Tilson and Stephane Hessel. To say I admire them is an understatement.

I laughed at the herding cats and was amazed to see them swimming. A cat that takes to water willingly? Wow!

Good to know if I end up with a walker I can entertain myself. I posted the kitty herders to Facebook too, thank, very interesting and entertaining.

Good stuff! Especially the cat-herding video. Too, too funny!

Thanks to katiekono for sending me here just now - I'm glad I didn't wait til my usual Sunday morning breakfast-with-Ronni to laugh. Using a walker is soooooo slow; I love that those two had some fun with it.
a/b

You totally made my day with the old ladies playing in the street. I'll return to this every time I feel a need to laugh. And then with the cat herders for an encore--! love you.

You "ate a Chinese restaurant once" Was that for lunch or dinner?

Dinner, mythster, and it was delicious, heh, heh.

Yes! to playing in the street. My partner and I have people waving us across crosswalks all the time. Sometimes we resist, sometimes we run like a flash, sometimes we laugh, bow, salute or play. Interesting how often people seem to think they need to tell us what to do, or protect us.

Good stuff here as usual. Please don't torture me any more with videos about how enjoyable flying used to be. Now when free time and other at my disposal flying is not to be anticipated with pleasure.