I've done a couple of columns on guitarists I particularly like – that's the guitarists I like, not necessarily the columns. Now Norma, The Assistant Musicologist, has decided to do one too.

Hers, unlike mine, is a thoughtful, well-structured enterprise - not like my random collection. In the way of these things, she's selected the tracks and I'm to write the column. I'm not completely on my own today as the A.M. has made some notes, so it's sort of a joint effort.

She writes: Today's title is from a comment about how much influence Charlie Christian has had, directly or indirectly, on later guitarists who are "standing on Charlie Christian's shoulders". But we also have to give credit to a couple of other significant guitarists.

Charlie Christian wasn't the first guitarist to use amplification or to play as a lead instrument, but he did play in a new style which influenced so many later guitarists across jazz, blues and R&B.

However, in the best tradition of making a sweeping generalisation and then stepping sideways and back a couple of years, we'll start with another influential guitarist – the immortal Django Reinhardt. After a caravan fire left the young Django with a badly crippled left hand, he developed a new playing technique to compensate. And that is what we'll hear with Stéphane Grappelly on violin (Stéphane changed the spelling to Grappelli somewhere along the line).

Django died in 1953, at only 43, but Stéphane was still performing into his eighties. Here they are playing H.C.Q. Strut.

Now back to the brief and brilliant career of Charlie Christian. 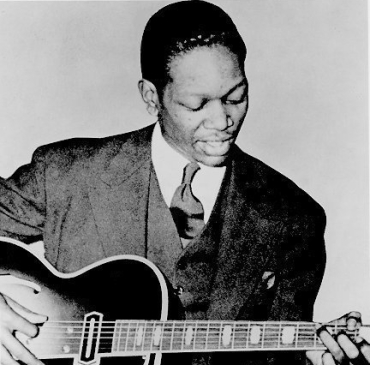 He had been playing around the clubs in Oklahoma, etc. before John Hammond was told about him and arranged an audition with Benny Goodman. Apparently Benny was not interested in even hearing this scruffy-looking character play – he could be a bit snooty, the old Ben – but one of the band slipped Charlie onto the bandstand during a break, and the rest, as they say, is history.

Sadly, a short history, as Charlie only played professionally for five years before succumbing to tuberculosis and hard living at only 24.

On this track, Breakfast Feud, that's Count Basie on the piano.

Charlie's influence can be heard in the playing of Barney Kessel. 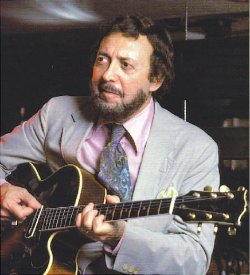 Barney played with Charlie who encouraged Barney to go to Los Angeles. Charlie played considerably louder than Barney and when he mentioned this, Charlie said that he liked to hear himself.

Sounds like the start of the volume war that has gone right over the top with rock guitarists.

Barney is an actual Okie from Muskogee but he was a member of many prominent jazz groups in his early days, including the Oscar Peterson Trio and Artie Shaw's group. He was also a session man of note, particularly as part of Phil Spector's "Wrecking Crew" who performed on many hits in the Sixties.

In the 1970s and 1980s, Barney, Charlie Byrd and Herb Ellis formed the touring group, The Great Guitars, that performed jazz standards. Here he is on a Lester Young track during his time with Oscar Peterson, Back Home Again in Indiana.

Okay, there's not a great deal of Barney on the track, but it is typical of his sound and the A.M. likes it.

♫ Lester Young - Back Home in Indiana

Another of Charlie's obvious disciples is Herb Ellis. 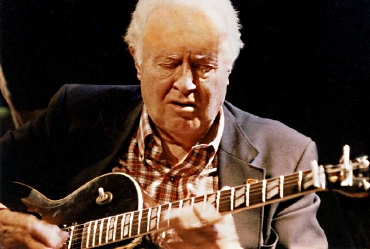 Herb was born and bred in the suburbs of Dallas and he took up the guitar after hearing various artists on the radio. He majored in music as a bass player as there were no programs for guitarists at the time. After that he had many jobs in various groups and orchestras, including, as with Barney, Oscar Peterson.

He was also another session musician most notably in the house band of Norman Granz's Verve Records where he played with Ben Webster, Stan Getz, Dizzy Gillespie, Buddy Rich and many more. He was in the band of the duet albums of Ella Fitzgerald and Louis Armstrong. He toured with Ella for some time.

As mentioned in the previous paragraph, Herb often teamed with other guitarists. Here he is with Joe Pass. Boy, they sure play a lot of notes on this track. Not as many as Albert Lee (or Alvin Lee either), but a lot.

This is Seven Come Eleven (a Goodman-Christian tune).

George Benson is probably the current player whose debt to Charlie is most obvious in his playing. 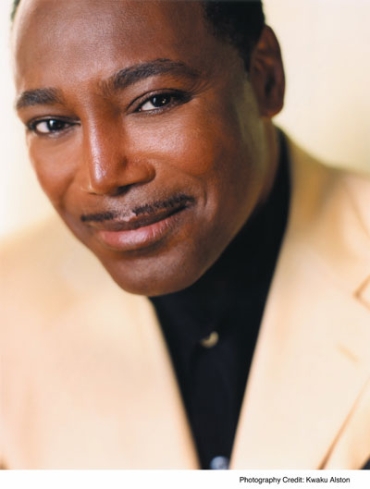 George has said that Charlie was his biggest influence and he recalls having seen Charlie when he was a lad. George was the lad, not Charlie. There are also some elements of Django in his playing.

George is from Pittsburgh and started out playing the ukulele on the streets there to earn some loose scratch. At age eight, he was already playing guitar in the local clubs (that were often shut down by the police).

After finishing school, he continued his guitar playing in various jazz groups around town. Eventually he was discovered and he recorded a number of albums. He even recorded with the master, Miles Davis. Then came Breezin and everything changed.

This is George with Myna Bird Blues.

Kenny Burrell is from Detroit. 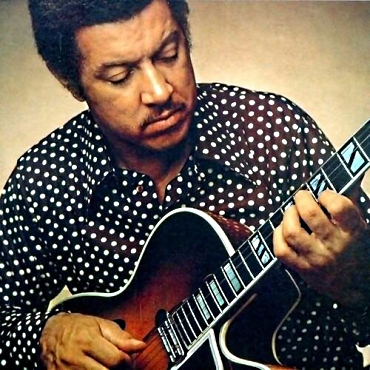 He has said that his major influences were Charlie Christian, Django Reinhardt and Wes Montgomery. So, we have two of our shoulders here today. I'm surprised the A.M. left Wes off her list. Maybe she's keeping him for another day.

Kenny's recording debut was with Dizzy Gillespie and he's yet another guitarist who has been in Oscar Peterson's group. He's known more as a side-man than a leader but his own music is certainly worth a listen. This is one of them, Midnight Blue.

T-Bone Walker is our third influential guitarist after Django and Charlie. Best known as an R&B performer, he also spent time in swing bands so there are some jazz influences in his style.

T-Bone was a few years older than Charlie; indeed, he arranged for Charlie to take over his position when he left for Los Angeles. 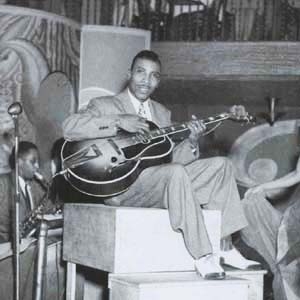 Aaron Thibeaux Walker was born in Linden, Texas, to a couple of musicians. He learned his craft on the streets of Dallas and Blind Lemon Jefferson, who was a family friend, would often drop in and teach T-Bone a thing or two about performing.

T-Bone always made it a policy to perform with the best musicians. At the suggestion of Lemon, he went to Los Angeles where, in the late forties, he recorded most of his finest works. Later great guitarists like Chuck Berry and Jimi Hendrix name him as their main influence.

This is probably his most famous track, which he recorded in the forties, Stormy Monday.

Stuff were a band from New York who were active in the late seventies and the eighties. They could best be described as jazz-funk, a term that might put your teeth on edge but I can't think of a better description.

The main man in this group was yet another Texan guitarist, Cornell Dupree, who cites T-Bone as a major influence. 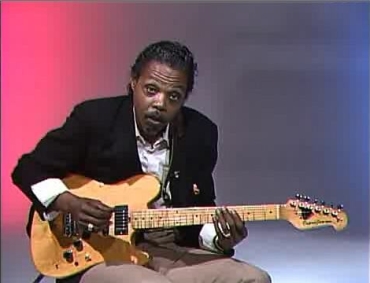 Before Stuff, and after, he was mostly known as a session musician and has played with Donny Hathaway, Aretha Franklin, King Curtis, Miles Davis, Lena Horne, Archie Shepp, Brook Benton and so many others. This is Cornell with Stuff playing Looking for the Juice.

♫ Stuff - Looking for the Juice

And to wind up today, who else but, arguably, the finest guitarist of them all. What can I say about B.B. King? Well, a hell of a lot, but most of it would be known by regular readers.

A lifelong student of music, he's absorbed many influences, but made the music his own. 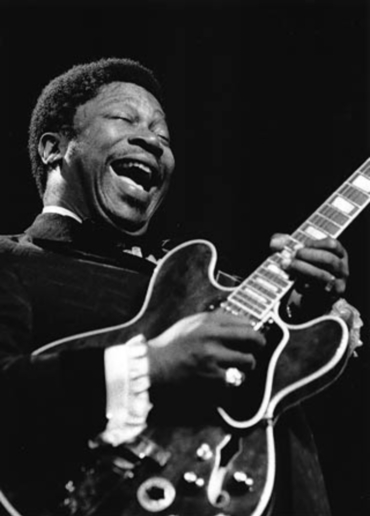 Wow !!! Norma, you outdid yourself on your selections. I spent the morning listening to the toe tapping jazzy music while reading the Sunday paper. Then I went back and played them all again. Although this was featuring the guitar, I enjoyed Oscar Peterson on the piano in 'Back Home In Indiana'.

Great music; just my kind. Kudos to you.

Peter, thank you for the history of these fantastic musicians.

Let's not forget Paterson, New Jersey's John Paul "Bucky" Pizzarelli (1926- ).
Worked with: Les Paul, Stephane Grappelli, and Benny Goodman. Acknowledged influences: Django Reinhardt, Freddie Green, and George Van Eps (the latter of whom introduced Bucky to the 7-string guitar which he now plays so masterfully).
Finding a decent-sounding YouTube sample of Bucky's work has proved to be a challenge. Here's Bucky in his early 80's, with his guitarist son John, showing us that, though he may be stiff, he's still got the stuff:
http://www.youtube.com/watch?v=dsm1YjjDYfk

Thank you, Norma. I really enjoyed this selection. Love that guitar...

Always a treat to listen to the musical offerings you supply us with each week Peter.

So many great guitarists, so little time! Certainly scope for more some time. Glad you enjoyed them.

This is one of the better collections of guitarists for my tastes that you've had here.