When I think about topics for these Gay and Gray columns, I always worry a little about whether I'm failing to look adequately for material about or of relevance to gay male elders.

In my generation of LGBT people - a generation in which most of us began our lives in the closet and many of us emerged in public only in mid-life - there's often a pronounced cultural separation between the genders, perhaps especially in larger cities.

Many old lesbians know mostly other old lesbians; they have made intentional families with other lesbians and evolved a woman-centered culture. Old gay men have their own sub-culture; many saw their friendship networks devastated by the AIDS epidemic; they spent a life in peril and sometimes hiding and tend to stick with their own.

I feel very lucky that I happen to belong to a church community where we have quite a few of both genders of gay people - and lots of straight people too. Truly mixed communities are somewhat rare in our age group. That's too bad. We can enjoy each other.

So thinking about this month's column, I went looking for something from a gay male elder to share. I think you'll enjoy David. At 70, this expressive, British, working-class man decided his life story might be something younger people, especially gay men, could appreciate.

He got a lot of positive responses to this introductory piece, so he made four more video clips, carrying forward the story of how he grew up, joined the Royal Air Force (RAF), voluntarily left the service so he could be more open about his sexuality and in retirement has apparently taken full advantage of the protected legal status gays now enjoy in the United Kingdom.

They are way ahead of the United States. Britain long ago allowed gays to serve openly in the military, protected us from employment discrimination and the police campaigned against gay bashing.

In Part 2 of David's story, available here, he talks about his early youth, about realizing at age 12 that he was different. By 15, he was out of school and working.

He had some encounters including in movie theaters and "people [men] took an interest in me; I was always particular and very careful." 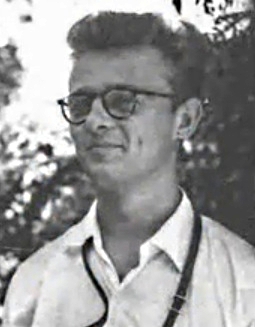 Yes, the young David was a looker. In Part 3 (here), he describes joining the Royal Air Force and realizing for the first time that he was not alone.

"There were thousands of airmen and among them, there were 100s and 100s and 100s of gay men, like me...it was instant dismissal if you were caught...but we lived in huts, sometimes there was movement between beds at 2 and 3 in the morning...it happened."

David loved the RAF. He served in various isolated Middle Eastern posts in an all male environment. He thrived. No one asked any questions because there were no women on the posts. He had one or two serious affairs, but the guys were always posted away and the romances died.

In Part 4 (here), David follows up with the story of his civilian life - the United Kingdom had decriminalized homosexuality and he was able to do the same job he'd done for the RAF as a civilian! He urges gay men to come out.

"If you are wondering how to approach your friends -- if someone asks you if you are gay, just tell them...I say that because, once you come out, you will then find out who your friends are!"

He discovered he had a lot of good friends.

Finally David recorded what he calls a Postscript. He thanks all the people who have thanked him - and speaks directly to young people who have been sending comments. "You'll be okay...you will start to believe in yourself..."

This wonderful sequence of videos makes me wish that more elders of all sexual orientations would record their stories. David is saying very much the same sort of thing as the folks who recently responded to bullying of gay teens by recording "it gets better" messages.

Even though these times are hard and sometimes frightening, I suspect that most readers here can agree that we've more and more lived into the solid essence of ourselves as we age. We've got life wisdom to share with younger folks. Maybe we should record more of it.

Thank you so much for this wonderful article. John, the Old Grey Poet at "Journal of a Writing Man"....

...was the person who got me interested in blogging. Over the years he has chronicled his life with Graham until this last year. Graham is younger but ill, and John seems to have lost interest in writing of the every day. Still he leaves us a wonderful record of love and caring that I cherish. I miss starting my day with him.

Mage: thanks for the sending me over to that difficult, lovely chronicle. Naturally it makes me wonder whether I'll be writing such a story of caring one day -- or will R?

How I wish David, or someone like him, had been around when I was a teenager. Gays were so stigmatized that a young boy who shared the locker next to mine committed suicide after graduation. I was so naive that I didn't know anything about homosexuality at the time. (Heck, I didn't know much about hetrosexuality) but after I became educated on the subject I realized that the young man was undoubetedly gay. He never dated girls and had a boyfriend. They were inseperable. I am sure the stigma caused him to take his life. A tragedy that should never have happened.

Thank you so much for finding and sharing these videos of David, Jan. I have watched the first and look forward to the whole series.

I wish I could have been more supportive of my young male gay friends when I was growing up but, like Darlene, I was seriously clueless about myself and others. Everyone was effected by these misunderstandings as we were growing up because we cared... we just did not know how. I think David generously provides an opportunity to heal for those of us who came to understand the complexities of this situation quietly in the wings as we aged. David provides a very vital link to a better understanding of the history of being a gay male. How eloquent he is and how lucky we are he survived and is willing to share his story.