Joe, a Golden Retriever, arrives at the dog run. His pal Max, a German Shepherd, trots over to greet him. They sniff each other.

JOE: Great. Glad to see you brought your ball. My person forgot my Frisbee.

MAX: Yeah, I know. They get distracted easily. Watch out for that teacup Chihuahua by the tree over there. She's been biting our ankles this morning.

And whoosh – they race off together toward the far end of the fenced-in run.

During the many years I lived in Greenwich Village, one of my regular stops was the dog run in nearby Washington Square Park. Although I've never wanted to own a dog, I generally like them and I like to watch them in groups. It's fun to imagine what what they would say if they could speak.

Dogs, left to their own devices, are social animals usually eager to find common ground – unlike cats who generally spit and growl when they unexpectedly encounter another of their kind who is a stranger. But not in all circumstances.

For the year I've lived in this condominium compound of 12 two-story, eight-unit buildings scattered among winding paths with trees and shrubs and lawns in between, I've come to know, more intimately in retirement than I would if I went to work every day, the six or eight stray/feral cats who make their home here.

Although they tolerate one another, it is at a distance. Each seems to have staked out personal territory and regular pathways. When they use the same paths, it is at different times of the day. I have never seen any of them together.

I put out food for the cats, but only two visit my patio to eat – always at different times of day. Here is the stray I used to call Blackie but have changed his name to Grumpy – he always looks mildly pissed off. 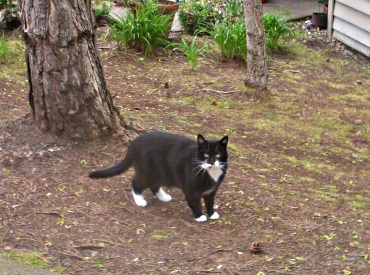 And here is the little cutie I'm thinking of adopting (if she'll ever let me get close enough to touch her) hiding among the table and chairs. 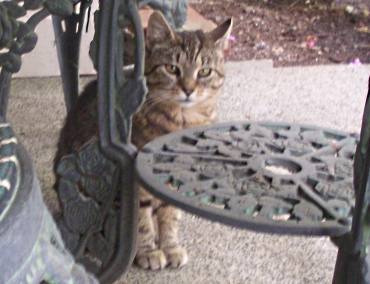 Ollie the cat (my indoor pet) often sits in the dining room window sill to watch Cutie and Grumpy at their meals outside. Occasionally, each of the strays glances at Ollie, then gives the feline equivalent of a shrug and continues eating. 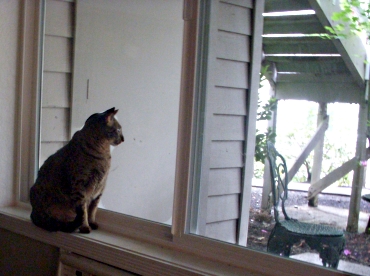 All has been quiet and congenial among them for months – until three days ago.

In the afternoon, I was working on my laptop with my back to the window when all cat hell suddenly broke loose: paws banging on the window along with multiple screeches and yowls.

Turning to investigate, I found Ollie standing tall on his hind legs on the window sill having a conniption fit while outdoors, a gigantic, orange-and-white cat I'd never seen before was banging back, hissing and growling at Ollie. It was a monumental cat fight in which at least an ear would have been torn had not a pane of glass separated them.

As soon as they saw me walking toward the window, Ollie jumped down from the sill (all puffy, twice his usual size) and the other cat – let's call him or her Big Red – was nonchalantly trotting away without a backward glance.

The next afternoon about the same time, same circumstances, Ollie and Big Red suddenly went at it again. Screeching and yelling and growling and spitting as they pounded at each other on the window. And again, it stopped abruptly when they spied me walking toward them.

On both days and since then, Ollie has sat calmly in the window ignored by Cutie and Grumpy when they stop by for their morning and evening meals.

So, apparently, social rules are more complicated than I suspected among cats. Since my back was turned when both cat fights broke out, I don't know who started it, but I can't see a reason for Big Red to interrupt a free meal for a cat sitting quietly on the other side of the glass.

If I am correct, then Ollie is making a distinction between cats he recognizes and one he doesn't; two who belong in his world and one who doesn't. Which doesn't mean he approves of Grumpy and Cutie. Invariably, after I come in from filling the patio bowl, Ollie plops himself in front the door – looking eversomuch like a furry doorstop - as if to keep me from going out again.

It would be so much easier if cats behaved like Joe and Max.

[By the way, this is what passes for excitement these days Chez Bennett.]

At The Elder Storytelling Place today, Mary B. Summerlin: Bathrooms

Heck, sounds like a reality show-in-the-making to me:)Hope you had a great holiday. Dee

Me too, LOVED this post. And love to observe animal behavior, especially cats, have two as well as occasional visitors like you. Hope you can entice Cutie into being adopted.

That, in a nutshell, is what I love about cats.

That last line was a beauty!!
I had a much more exciting morning than you did.

I saw American Idol Scotty McCreery on the Regis and Kelly show this morning! ;-)

Cats are all you said. That little stray, she's a beauty. I hope you can take her (if she's a she) in as strays really don't live that long. The problem is whether she was box trained before she might've been dumped and that you won't know until you try if she becomes secure enough to give you a chance. I've had a lot of 'stray' cats (two of them right now are the main cats here) and most have adapted quite well to becoming a house cat. When you do bring her in though, there will be some adjusting between her and Ollie but they generally work such things out within a fairly short time although our two males still bat at each other regularly.

I love cats.
One of our neighborhood cats has begun to figure our collie out. They always do. Our dog is a sweety but if they run, she runs. We have two inside cats and our dog just wants to MEET the outside cats. Well, this one is slowly getting closer, or I should say, allowing our dog to get closer before it leaves. And our dog always cries a little. Fun to watch.
However, I've never heard of a fight with glass between! Fascinating. Hope there's more to this saga.

I'd much rather chat about cats than Medicare. It's much more warm and fuzzy, don't you think? I have 4 rescues ranging from about 10 to one year. They are distinctly unique and their interactions, like humans, always amaze me. Some get along, some can't stand to be in the same space. Sound familiar?

I hope Ollie has his claws.

I LOVE, LOVE, LOVE to watch animal behavior -- wildlife or semi-tame, to the very tame!

Always have been a "cat person" -- at times having as many as eight. Every single one a rescued stray! I'm down to two indoor cats, but feeding four regular strays I see. Who knows how many other strays eat at my "cat buffet" since the four I "know" sometimes hang out on my carport; two are very tame (I suspect someone dropped them off, since already spayed/neutered), the other two won't allow me to touch them, but will lounge around near the food.

As for dogs, I now have two that I love very much. NEVER would have thought I'd own a dog, but after husband died, I decided to get one. Then step-dad got sick, asked me to take his dog. Rambo is a miniature pinscher; Oscar is a miniature doxie. And like cats/people/all creatures, they have individual personalities; Rambo is initially friendly with other dogs, but if they try to follow us (when out on walks) he'll go for their throat. Oscar, on the other hand, loves every person and every other dog, never met a stranger! I got Rambo from a shelter, so no telling what his "issues" are!

What I discovered about dogs versus cats: You will never, ever give a dog too much love/petting; they bond to you with such unconditional love, it's heartbreaking. Cats, as you know, are a bit more discerning -- and though they can be affectionate, it's on their terms (that independence is what I have always loved about them).

Our cat used to play hardball patty cakes against our living room window with an outside male pud who would strut back and forth along the sill, pausing to stretch high against the window, as if to show off his multicolored stomach.

We called him "Romeo."

He'd show up same time every evening, like her "please be my" prom date without offering flowers or cat nip.

Our cat went nuts trying to get Romeo to leave, but he just kept staring and moseying back and forth, as if he figured she would eventually fall for him.

But that never happened.

We haven't seen Romeo for a couple years.

Many years ago I lived in a basement apartment off a busy street in Chicago. My cat, Godiva, often laid in the ground level window with a local outdoor cat parallel to her in the grass. One summer day when I returned from work I found that children had lifted the screen and Godiva was gone! I frantically called and looked and soon she and her window friend came ambling out of the bushes very glad to see me and not frightened at all. Apparently they had hung out all day and she had been kept out of danger by her streetwise friend.

*What* a great piece this is, Ronni!

You must admit, sometimes it just gets too hard to keep watching politicians - animals have it over them every time!

I volunteer every week at out local animal shelter. I get to work with cats and kittens & their interactions are amazing. Each cat has his or her own distinct personality and style. Somebody somewhere has probably done a Master's thesis on the interactions of shelter cats, and other groups, and it would be a good read.