Home About Archive Contact
Memory Lapse at the End of the World
ELDER MUSIC: 1955

SKYPE 1940
We think we live in such modern times with miracles of technology and communication that were not even glimmers in the eyes of developers until the past couple of decades. But here's a forerunner of Skype from 1940: 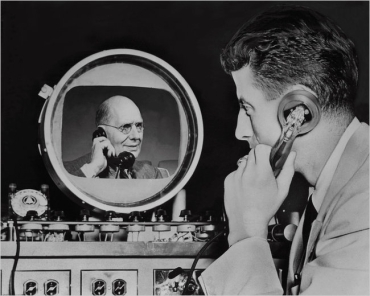 The photo is from a short news story about it at The New York Times.

WHAT CAUSED THE DEFICIT?
This chart has been posted all over the web since it was released by the Center on Budget and Policies Priorities a couple of weeks ago. Take a good look and keep it close during the deficit arguments in Washington so you know who's lying and who isn't.

You can read more about it here.

CONTROL CAT
Many are the ways our cats control us but few are as direct as this one.

LONGEVITY BLOOD TEST
Researchers at the University of California are considering creating a website containing tested geriatric calculators that can predict, they say, the odds of elders dying within the next six months or four years or nine years. The website would be restricted to physicians.

Paula Span of The New York Times's New Old Age blog asked her readers what they thought about this idea. She reports

”...they were fairly vehement about having access to such information. Not one thought the site should be restricted to people with medical initials after their names.”

You can read the story here. What do you think?

ANOTHER LONGEVITY TEST
Several companies are now selling blood tests that purport to assess customers' longevity and tell them how healthy they will remain. The test measures telomeres. They shorten with age so, apparently, the shorter your telomeres, the shorter your lifespan.

”Various studies have shown,” reports The New York Times, “that people with shorter telomeres in their white blood cells are more likely to develop illnesses like cancer, heart disease and Alzheimer’s disease, or even to die earlier. Studies in mice have suggested that extending telomeres lengthens lives.”

Unlike the tests at the proposed website from the University of California, this one does not give a specific time frame. You can read more here.

PROVING THAT SOME PEOPLE HAVE TOO MUCH TIME ON THEIR HANDS
Still, it's fun to watch.

HOW MUCH DO YOU KNOW ABOUT CIVICS?
The Intercollegiate Studies Institute created the Full Civic Literacy Exam testing knowledge of how government works. The average score for all 2,508 Americans who took the exam was 49 percent. College educators scored 55 percent.

They say it is not an easy test, but I got 84.85 percent correct (she said, bragging). It's those international monetary matters I'm no good at. You can try it out for yourself here. It's free. Hat tip to Darlene Costner.

HAWKCAM IN NEW YORK CITY
Remember when live webcams mostly monitored traffic and ocean sunsets? Now, it seems, every wild animal on the planet has his or her own.

This one comes to us via Tamar Orvell who blogs at Only Connect. A camera keeping watch on a mama hawk and her hatchlings on a window ledge in New York City.

As a bonus, click here to see a whole bunch of still photos of cats watching the HawkCam on computer screens.

NEVER, EVER GET BETWEEN A KITTY AND HER SMOKE

As usual, great way to start the w/end. And BTW, I'm really impressed with the score of your Civic literary exam:)Impressed, but not surprised considering all the research you do for TGB. Not sure when I'll get the courage to try my hand at it!

And yes, finally we have sunshine in NE Ohio today! Hope your w/end is the same. Dee

Thank you. Can't get to the exam but will try it later. And again, you have started our weekend off with a smile. He reads and watches over my shoulder.

That Control Cat is related to our Frisker -- no doubt about it.

Love the live web streaming of a hawk in New York. I live I Scotland and we only see that with ospreys, a protected species, and it's run by the Royal Society for the Protection of Birds.

The two cat videos had me in hysterics! And I love the bicycle in an airport!

The cat video of the control cat was really great. That was one very smart cat. What to say about the little addicted kitten? I guess he/she is a fighter for his/her rights.

Oops; since the world didn't end I would like to know how much time is left to me. I will weigh in on the subject of knowing approximately how many years on months (maybe days) that I have left to live.

I would definitely want to know because it would alter the way I use my money. If I only had six months left I would cross one thing off my bucket list. Being of sound mind and body, I would spend it. ;-)

there is something really weird about me and animal videos..I have an inexplicable aversion to them. I never want to click on them... but I did open on the last one, the "smoker"..I laughed and laughed. Thanks for sharing it!

The cat smoker resembles me back before I quit in 1980.

Terrific cat videos and fascinating hawkcam. The human bicycle is a hoot.

I don't think I want to take a longevity test. The result might be a shock.

Thank you, Ronni, for another round of "Interesting Stuff."

At least the control cat had the decency to say thanks before digging into the food in the container.

Some of the links didn't connect and locked up my computer (or maybe it would have locked up anyway) but I enjoyed the ones I could get. Computers are great but they can also be very frustrating sometimes!

I scored 75 percent on the Civics Test. All of my correct answers were from what I remembered from school. My teachers would not believe it!

Cool civics test. I got 93% -- missing the ones about the levee and the debt. I know a whole lot of politicians who need to take this test. Thanks for posting this. I'll share with colleagues at work.

I only missed 4, bless those Holy Names nuns who taught me so well!

Just took the test with 82% result. And I thought I knew no civics! Now passing it to my spouse.