The New Home One Year Later

Tomorrow, Tuesday, will be the first anniversary of move-in day at this new home of mine in Lake Oswego, Oregon. You would be amazed at how much I have not done yet to settle in.

Few pictures are hung. There are still 30-odd unopened boxes of books because I haven't bought shelves yet. I was waiting to paint and having done that, finally, a few weeks ago, was struck by a series of money setbacks. I'm sure you've been there.

I forgot that annual premiums for both homeowners and auto insurance were coming due. The vacuum cleaner died as did the electric tea kettle, both needing to be replaced right away. Ollie the cat cost a small fortune getting a checkup and yearly vaccines at the veterinarian.

There were a couple of other surprises that, of course, cost more money. It often goes that way, doesn't it, although I'm not much perturbed by not having finished the house set-up. Oddly, the older I get – closer to the end of my days - the less I feel the urgency to get things done quickly as I did when I was younger.

A year ago, I was focused on getting comfortable inside so that I paid little attention to what was going on outdoors. Now I'm becoming attuned to the rhythms of life beyond my windows. Spring here is wildly colorful and varied.

Look at these interesting, little blossoms on a young tree next to my patio. They dangle beneath the large leaves rather than above where they could bask in the sun. Next to the tree is a good-sized bush exploding with pink somethings. The name doesn't matter to me; I just like its exuberance. 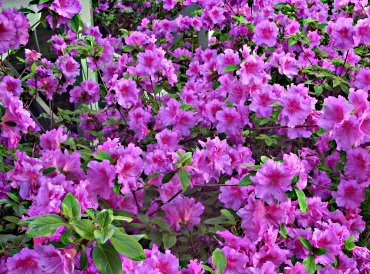 Azaleas abound (Or are they rhododendrons? I don't know the difference). Here's a pink one. 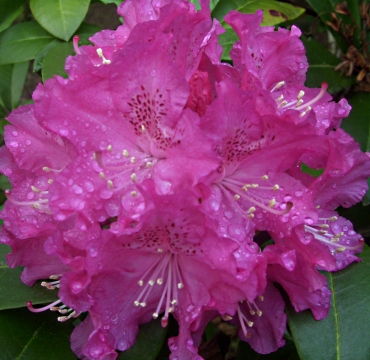 Another nearby bush of them produces huge white flowers. 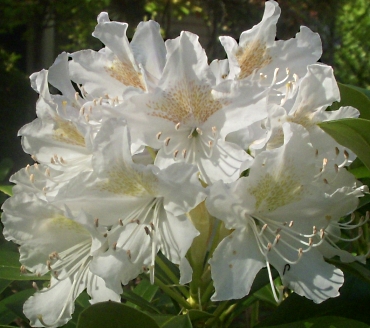 Any day, this bush in front of my apartment will burst forth with something even larger, I suspect, than the other flowers. 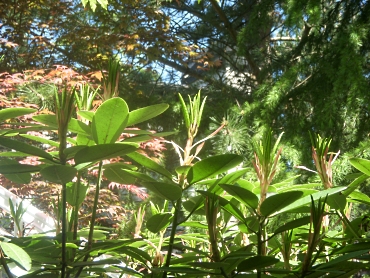 One perfect purple pansy grows from a pot along a neighbor's walkway. 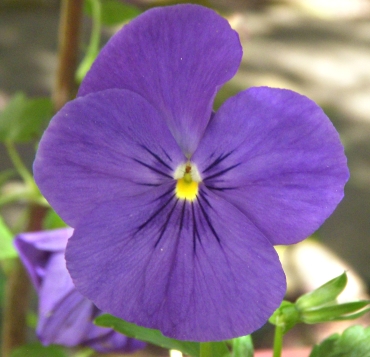 The birds won't hold still long enough for me to get photos, but there are many kinds. In the first glimmer of morning light each day, a flock of geese flies over honking as if they are the local avian alarm clock.

Soon, tiny little birds with a high-pitched tweet come by in threes and fours dressed like miniature penguins – black and white but so small, three or four could sit in the palm of my hand.

Crows (or blackbirds or ravens – I've never known the difference) lend their raucous call to the growing morning chorus.

Before long, a screaming bluejay swoops in scaring off the little penguin birds.

Owls hoot in their mysterious-sounding way (I thought they sleep in the daytime) and a pair of taupe-colored, medium-sized birds with faint orange spots peck leisurely at the ground leaving me to wonder how they survive the resident stray cat population. I call this one Blackie. 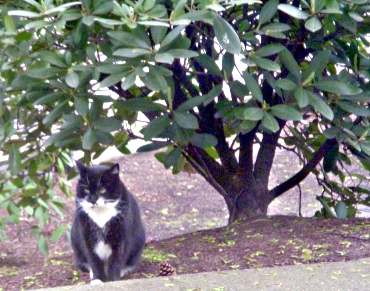 He and the cute little brown cat I may or may not adopt both visit each morning and evening for a free meal, and several others wander by now and then but never stop to eat.

There's a squirrel who scolds the cats as well as some of the birds and me too when he spies me on the patio. Mostly, everyone quiets down by midday until evening when, apparently, they have more to say before going to sleep in their hidden-away places.

During the past few days, pine cones have been falling from the trees keeping up an irregular plonk, plonk, plonk as they land on the ground and sidewalks.

Take a look at this on a pine tree nearby that is covered with them. Do you think it's what a pine cone looks like before it becomes a pine cone? 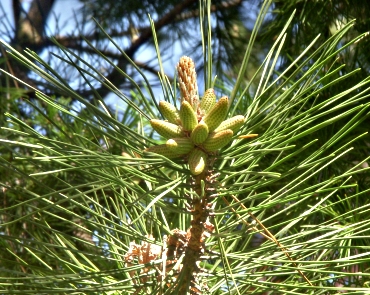 This fir tree – there are many like it around the area – is my favorite. 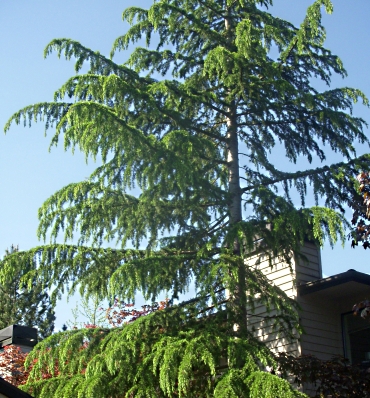 Its lazily draped branches put me in mind of Victorian-era bordellos – the kind with flocked wallpaper where scantily but modestly- (by today's standards) dressed women lounged on velvet sofas waiting for the next customer.

The year, as they do at our ages, has flown by. There is an astonishing amount of constantly changing life outside my windows and now that we know predictions of the apocalypse (or whatever it was supposed to be) were false, life is good.

Not that it matters much but rhododendrons are in the family of azaleas. Prettiness matters!
Never cared one way or the other about evergreens in my younger days but now am quite partial to them.
From what I've read, other birds are birds worst enemy. Cats get blamed but it's mostly birds that do birds in!
Lovely pix.
Happy anniversary!

Looks and sounds absolutely lovely. Portland Maine is grey and drippy, has been for a week. Glad you're getting some sun! Good luck with the bookshelves. :)

Life is good even if the "Rapture" didn't come. :)

Who needs Rapture with such beauty surrounding you?

You appear to be enraptured! Thats great. Thanks for sharing the feeling.

Lovely flowers and yes, you are seeing baby pine cones!

I am enjoying spring and all that it brings much more as I get older, and there is less of a push to get things done than there used to be. Isn't it nice?!

Lovely colors, it is beautiful there. If you get the chance you might want to visit the Japanese garden in Portland, the flowers should be astonishing and the view is spectacular, looks out from the teahouse towards Mt. Hood.

Sylvia...
Thanks for confirming the baby pine cones.

Celia...
The Japanese garden is already next on my list.

Although I love Arizona I have to admit that our Spring is drab compared to other parts of the country. This is your reward for all that rain.

Beautiful photos. I do love Azaleas and I tried to grow them here, but the heat did them in.

Lovely nature tour, Ronni, thank you for the photos.

I am surprised to learn your move was a year ago. As I've gotten older I've noticed life is like a dance with a rhythm of fast, fast, slow, slow, fast, fast, slow, slow. A year speeds by so quickly now but at the same time the day to day changes of the seasons seem to occur so slowly. Isn't that a paradox?

Lovely photos. Are you sure you needed a new electric kettle? We still use a pan on the stove. Old fashioned that way tho we have HBO, a color NOOK and the internet, so we aren't saving money!

Your photos remind me of what our garden should look like. Instead we have 70mph gales ripping through the country ( this is Scotland) and every time I go out I see more damage - two fences down, one tree down, broken branches littering the garden and pots hurled around as if some demented giant demon had grabbed them.
These freak storms are forecast not to abate until tomorrow. Heaven knows what it will be like when I wake up in the morning.
In two weeks time we open our garden, along with some others in our small town, to the public for charity. Maybe the public could give us a hand with the clearing up...

Lovely shots, Ronni, and I still have to correct an awful paint job that was done for me, oh, nearly two years ago now. I would have said last week.
Budgetary and time constraints on all of us.
XO
WWW

What beauty surrounds us these days. Love your flower pictures, Ronni!

Love your pictures, Ronni. The flowers are beautiful but I am especially attracted by Blackie.

He is very hefty and looks as though he not only stops by for Breakfast and Dinner but calls on you for a little lunch,too!

Gorgeous flowers! Thanks for sharing those spring beauties with us.

What a delightful area you've chosen for your home.

Sorry that Murphy's Law struck your teakettle and vacuum cleaner. Murphy struck my vehicle a couple of weeks ago; cost me just shy of $3,000.00. Ouch! No fun when stuff breaks.

Beautiful pics! And a year in, already!!

I'm with you when it comes to getting things done. My mantra is "no one sees it, but me." However, the frugality of daily living does get to me with everything in sight costing more. What the heck! Dee

I really miss Spring and Fall here in Southern California ... but I do NOT miss the winters back East! Guess you can't have everything -- daggone it!!

All my life I've wished that I had someone who would tell me the names of flowers and trees, someone who knew about wildlife and could also tell me the names of the bugs, snakes and spiders. I have tried checking out books from the library or looking online, but I'm never sure that what I'm looking at is the same thing pictured... and I guess I'm too lazy to follow up.

I keep a running list of every kind of bird I have seen outside on my deck and in my yard. I keep the list, a pair of binoculars, and my bird book handy beside the deck door. I have bird feeders hanging on my deck, which I keep stocked with various birdy delicacies. Watching the birds is one of my life's satisfying pleasures.

I loved today's post mostly because you were able to enjoy the beauty while not giving a damn about the names - after being a city dweller I now love my 1/2 acre garden but frequently cringe when people say "how lovely, what is it?" - duh .. Like classof65 knowledge of nature is something I'm working on - but slowly! As we are almost at the end of Autumn here in Australia I can start reading gardening books planning for Spring and hoping to retain some names in the process.

wow a year already! nice nature pics, nice new header pic. i am enjoying spring here in boston. if i don't know the name of a plant, i make one up.;)

You have picked the perfect antidote for the unexpected bummer of extra expenses. I had some of those myself this month. Thanks for the reminder that I can go out side and breathe when it begins to prey on my mind! Lovely pictures too. Thanks for them.

Your photos are RAPTURE! As well as the image of your day-to-day views. Thank you so much for sharing!Luverly post.

Your post and photos are a wonderful armchair walk-about for me while I drink coffee this morning. I can almost feel the morning dew on those azaleas.