A Trip to the Ford Motor Company – Part 1

Last week, at the invitation of Ford Motor Company, I attended a two-day media conference at the company's world headquarters in Dearborn, Michigan.

Billed as Forward with Ford 2011, futurists and trend spotters along with Ford's designers, scientists and product specialists gave us insight into the consumer and development issues the company is working on to meet the needs of the future.

There were about 150 attendees – automotive and eco journalists, technology reporters and influential bloggers of many stripes – for whom Ford covered all travel, accommodation and meal expenses. Aside from hotel tips, I didn't spend a dime.

Cynic that I am about all corporate public relations, I was nevertheless sucked in - happily. What Ford did for two days was show us a lot of fascinating innovation – some currently available in their cars and some still in development – and I learned a lot.

Who knew the company has a smell lab in which they test for and correct offensive odors from components? 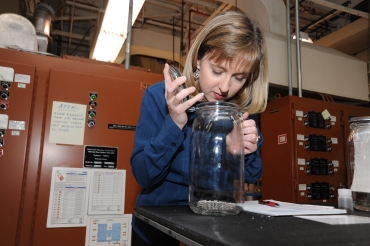 Or that they use the same motion sensing technology as animated film makers to understand how people move within automobiles. (Note the sensors on this guy's head, legs and arms.) 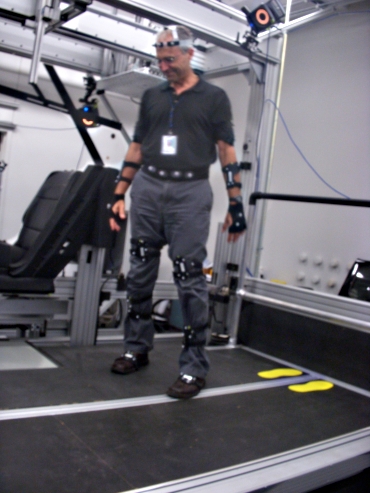 Or that there is an entire department devoted to studying and developing the sound of horns for different kinds of vehicles which includes, in addition to safety, incorporating cultural influences that inform Ford about the audio preferences of people in different countries.

In an effort to reduce the weight of cars for fuel efficiency and for eco-sustainability, they are also working with soybeans, coconut, hemp and other natural substances to replace or partially replace plastics.

Before this conference, the only thought I'd ever had about car manufacturing was a mental image of someone on an assembly line bolting one part to another. But, of course, that was a personal failure of imagination.

Anyone who reads this blog can easily guess that the session I was most interested in was on aging in relation to cars and I'll tell you about that tomorrow. Today, it's the test track where we got hands-on experience driving cars.

First, the track is enormous – the size of many football fields - and in fact, it once was an airport. Ford uses the control tower to monitor weather for people testing their vehicles. 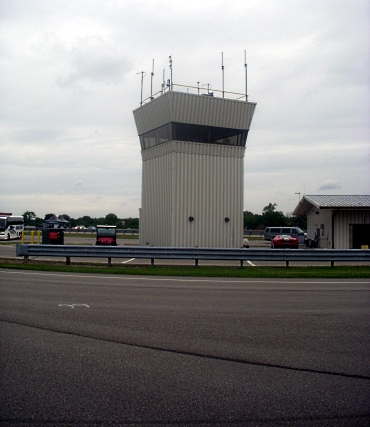 There were seven demonstrations including some contests for which prizes were awarded – a target challenge, power challenge, an off-road course, an eco-driving challenge and all-season driving skills challenge. Me? I went straight for two others.

The connected car demos were fascinating, showing how sensors can save lives. In the one pictured below, the safety brake technology is able to detect another car, hidden from view, coming too fast toward an intersection and it stops your car soon enough to prevent a collision.

How many times in your driving life has a car appeared from nowhere and you slammed on the brakes missing a crash by inches and nearly giving you a heart attack in the aftermath. This was amazing demonstration not to mention important and useful technology.

But from the moment I first read about the conference, the one hands-on experience I wanted was the “park assist.”

According to a Ford-sponsored poll, nearly a third of Europeans suffer from “parkophobia” - the nerve-wracking experience of trying to parallel park. I have no doubt that at least an equal number of Americans suffer from it too; I have friends who will park half a mile from where they are going to find diagonal parking.

You have probably seen the television commercials for Ford cars (another manufacturer has a similar feature) in which the car parallel parks by itself. I have watched that commercial a dozen times and did not believe it.

I shouldn't care; it's not even technology I need because one of my (few) weird little talents is that I am a world-class parallel parker. People on sidewalks have actually applauded me for getting into tight spaces in one try.

So I was fascinated to see if the car is as good as I am. Can it do it in one go? Does it park close enough to the curb but not too far away? Does it even itself out between the two cars front and back?

When it was my turn to try out park assist, a Ford videographer – a terrific, interesting man named Mike Wood – asked if I would allow him to record my test drive from the back seat. Well, of course, and here it is:

As I said in the video, is that cool or what. The hard part is keeping your hands off the wheel as it turns itself. The natural, human instinct from all our years of driving is to grab it – the wheel should not be turning on its own. Except that in park assist, it should and must.

Did you notice that I never look behind? This is an excellent elder feature when, in our old age, it sometimes becomes difficult to turn our heads far enough to see behind us.

Tomorrow, I'll tell you more about the conference in general and particularly the session on aging.

At The Elder Storytelling Place today, Jeanne Waite Follett: Ask and Ye Shall Receive – Whatever

WOW!! I am a good parallel parker as well, but since I can't turn my head easily now either - that would be a great feature to have!!

What a good experience!!

I know I am just repeating what you said but that is so cool!!!

I'm really good at parallel parking as well! Better take a survey. Maybe readers of R.B. are ALL great parallel parkers.
Back to the comment. That parking is terrific and spooky. One would have to "learn" that too, I think.
Can't wait till tomorrow's entry.
Off subject: What did you do? Your hair looks swell!

Like you, I am not one to avoid parallel parking -- I worked downtown for too many years but this is downright amazing!

It sounds like you had an excellent experience in Dearborn! I look forward to more on your trip!

I would have the same reaction as you did. "take your hands off the wheel" Oh,no!!

If I had owned a car with sensors I might still be driving. A car that 'came out of nowhere' appeared in front of me and slamming on my brakes did not prevent a rear-ender. My car was totaled; he was driving Hummer and only had a broken tail light. I never drove again.

My granddaughter needs a car with sensors, too, because she just rear ended a car and is now without wheels. Maybe it's genetic. ;-).

Think how many accidents can be prevented with cars of the future. I guess the future is here.

You look great in the video, Ronni, and I am sure you gave the guys at Ford a wonderful image of what elders can do.

cool video..I guess knowing how to parallel park will soon be unneccesary...weird!

Count me out. Forty or fifty years ago, I would have told you that I was a world class parallel parker; but, I spent too many years (30 of them) working at large plants where all parking was straight in. Not having used the skill, I am now a lousy parallel parker.

I agree with other readers about being thrilled to have you represent us to Ford Motor Co. Wonderful! (And you do look wonderful in the video, Ronni.)

Wow! I am the lousiest parallel parker on earth! This feature woul reconcile me with driving. Now can they back your car into a garage?

Microsoft in Seattle sponsored a big seminar on Cars of the Future a few years ago which I attended. I was teaching jr high science at the time and am interested especially in electric cars.
It was fascinating to hear from the car designers who have been working on new vehicles!
So glad you got to go and thanks for the awesome video!

I can't even keep my hand off the mouse when my son comes on my computer remotely to fix glitches--doubt that I'd do well not touching a spinning steering wheel. Interesting post. What hath humans wrought?

What fun! No wonder you were like child in a candy shop. It must have been fascinating to go through all those demonstrations.

My father taught me as a teenager to park a car, change a tire, and clean off the distributer caps (oh, also how to jump start a car on a hill). For sentimental reasons, I'd have a hard time taking my hands off the steering wheel. Undoubtedly, that would only be at the beginning. What a marvelous new option.

What a great opportunity and experience! Thanks for sharing.

I'm thinking now about all the engineers working away to make our lives safe and comfortable.

Living in Manhattan for many years I am a great paraelle parker! I was taught to drive on a stick shift many years ago and I can drive anything. Drive lessons then covered everything and you didnt get a license if you failed. Way cool indeed Ronni.....My auto now, a Ford Flex has a back up sensor. I love the Flex for carting my dogs. Any recent buying of autos for me, I get all the bells and whistels. I neeed 360 visibility and the Flex has it! This is not a promo for Ford, but I am one happy gal! Wonderful opportunity for you Ronni, Thanks for sharing!~Kate

That is so cool. It's one of things, like cruise control, that at first seems a bit silly but then turns out to be a necessity in the long run.

I want tomorrow's post today! And I can't think about Ford without thinking about the famous sit-down strike of the 30s, the era I write about. More power to automotive worker unions....

Ronni, did you quiz them about the likelihood on computer glitches? How likely do they say it is that the technology could miscalcualte?

Of course this may mean nothing if you only use the technology 3-4 times a year as opposed to 3-4 times a week.

You're so pretty. That was what kept me fascinated, not the car ;-)

And it is great to hear about a car company that has been around since the beginning but still on the cutting edge of R&D. Go Ford!

This is one more step toward cars that drive themselves. Isn't that what we were promised by the Jetsons-and we have the Jetson phones that show the faces of those we are talking with as well.
What is coming up next?

WOW oh, WOW. Both G and I watched the video with lots of cheers. Ford has been going the extra mile lately, and I cheer them on. I was pleased to see you too. A double treat.

Wow! It's great to see a real person trying out "park assist." I'd seen it on TV ads, and wondered what it would feel like to use. Thank you for showing us!

I feel both excited and worried about this kind of technology. As you say, it would be great to have if there's a time when we can't move so well to look behind us, but I wonder: Is Ford setting us up for a future where nobody knows how to park for themselves, or worse, how to look out for other cars and step on the brake? Will there be a time when nobody needs to know how to do these things, even for an emergency?