ELDER MUSIC: A Bit of Reggae in the Morning

Even 30 years after his death, Bob Marley is still the poster boy (shouldn't that be poster man?) for reggae. However, he wasn't the first and in my opinion, he wasn't the best. He wasn't bad though.

DESMOND DEKKER was the first reggae artist to impinge upon my consciousness. Desmond Dacres (as his folks knew him) was born in St Andrews, Jamaica and grew up in Kingston. He worked as a welder for some time until his workmates suggested he audition at the local studio. They were unimpressed and Des went elsewhere.

These folks liked him and he eventually put out a record that did okay in his native country. Desmond recruited his four brothers for his backing band, The Four Aces. After realising there was already a rather successful group called that, they became The Aces.

They had a number of local hits and his was considered Jamaica's foremost singer for much of the Sixties. In 1968, he recorded Israelites and that became a worldwide hit and that's when I first heard of him.

Purists say that this song is actually an example of rock steady but I've never able to tell the difference between that, reggae and ska. It's all music anyway. Here it is.

Reggae and its antecedents came from the locals listening to the soul and R&B from America, particularly that from Stax Records, and putting their own stamp on the music.

The next artist, however, went in the opposite direction. JOHNNY NASH was born in Houston and began his musical career in the Fifties as a pop singer. 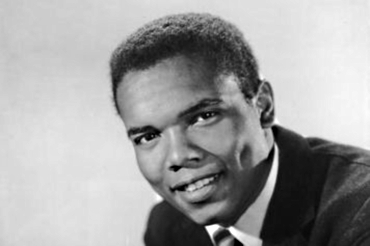 In the Sixties, he and a friend formed their own record label and signed The Cowsills before they were well known, or known at all really.

Johnny traveled to Jamaica and recorded some songs there. He also tried to popularize some of the Jamaican groups in America. One of these was a mob called The Wailers. However, success for them outside their own country had to wait a while.

One of the songs Johnny recorded was I Can See Clearly Now. This was later covered by Jimmy Cliff and many others. He has retired from music but to the best of my knowledge, is still with us. Here is his biggest song.

THE MAYTALS pretty much invented reggae. If not the music itself, certainly its name when they recorded Do the Reggay. Apparently this was just rock steady slowed down. It seems that it was cool for the "rude boys" to dance slowly rock steady was too fast for them. 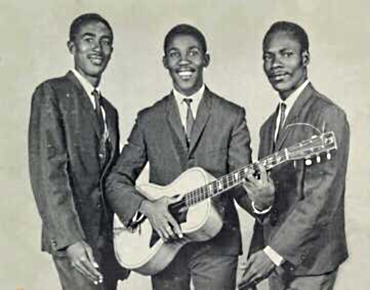 That's not the song I'm going with though for The Maytals. The front man for this group was Frederick Hibbert, more usually known as Toots, and he'll also be featured later. Toots claimed that he made up the number 54-46 when writing this next song about his time in jail. He said that he was arrested whilst bailing a friend. The song is 54-46 That's My Number.

JIMMY CLIFF was already an established musical star in Jamaica when he came to the world's attention as the lead role in the film The Harder They Come in 1973. This is Jimmy in a shot from the film. 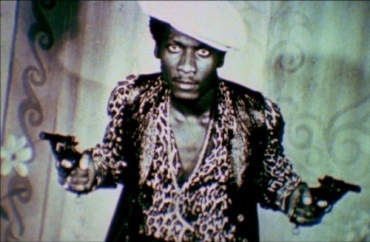 This film probably did as much as anything else to introduce reggae to the wider world and it still stands up today as worth watching. The sound track is about the best sound track record ever.

Jimmy was known as James Chambers to his folks. Like a lot of other performers, and also the character he played in the film, Jimmy was born in the country and went to Kingston to further his education and/or get a start in the music business.

He entered talent contests and sought out record producers in an endeavour to get them to record him. One day he convinced one of the producers to start his own record company and have him as his first artist. Surprisingly, that worked and he hasn't looked back since.

This is the title track from the film, The Harder They Come.

♫ Jimmy Cliff - The Harder They Come

THE UNIQUES formed, disbanded and reformed several times over their lifetime. 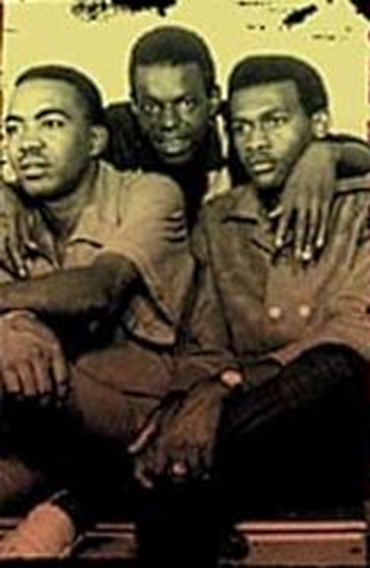 The incarnation that recorded their best work was Slim Smith, Lloyd Charmers and Jimmy Riley. Slim was the only constant throughout but his unfortunate death in 1973 brought an end to this group. My Conversation is the song for which they are most remembered.

♫ The Uniques - My Conversation

TOOTS HIBBERT was the main man in The Maytals and he seems to be the reggae singer most influenced by American R&B - to such an extent, he recorded an album called "Toots in Memphis" where he covered songs by Otis Redding and others. And a damn fine job he did too. 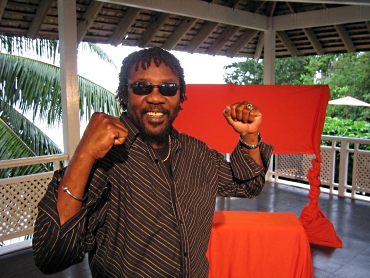 In the way of these things, I'm not going with one of those songs. It wasn't just R&B that influenced Toots as this next song will demonstrate admirably. This is his cover of the John Denver song Take Me Home, Country Roads. I like it better than the original. 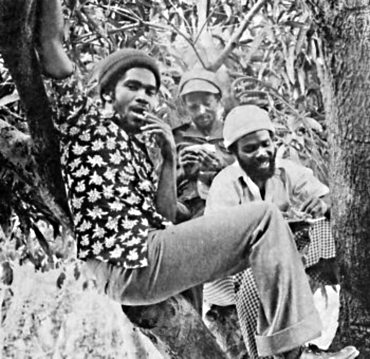 Their single claim to fame is a terrific song called Rivers of Babylon that was featured in "The Harder They Come". The song is based on Psalm 137 from the Bible.

It's a very pretty song and does its job well except that it leaves out the final verse from that psalm which reads, "Happy shall he be, that taketh and dasheth thy little ones against the stones."

Here is Rivers of Babylon without that verse.

♫ The Melodians - Rivers of Babylon

BOB MARLEY is still the most famous reggae artist. 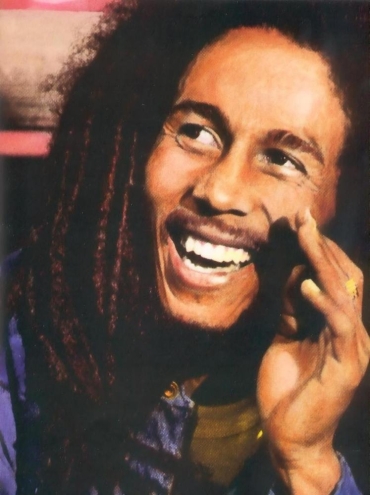 He took reggae and added a rock feel to his guitar playing. Before him, this aspect was still more under the stripped-back influence of Steve Cropper in most reggae music. I'm not complaining; I prefer Steve to Bob as a guitarist.

Bob started out forming a vocal group with his friends Bunny Livingston and Peter Tosh called The Wailers. Those other two members are pretty handy reggae artists themselves. Eventually Bob's talent shone through and the group evolved into a complete musical outfit with Bob as its focus as singer, guitarist and songwriter.

He died at age 36 after a melanoma had spread throughout his body. This is No Woman, No Cry.

Some more Jimmy Cliff, even though I'm leaving out dozens who should really be included.

Another song from the film is Sitting in Limbo. It isn't very reggae-like in its structure and has been recorded by many artists in other fields, the two best of which are by the Neville Brothers and John Sebastian. Of course, I'm going with Jimmy's original.

So MANY great songs! Thanks Peter! I've got "The Harder they Come" in my Netflix queue and I'm looking forward to seeing it. I'm not sure how I missed it in the first place! Once again you and the AM are adeptly filling in my sketchy musical education.

Thank you, Peter, for yet another great selection of songs.

Reggae's bouncy beat cheers me up. It's sunshine music for my soul.

I especially enjoyed "I Can See Clearly Now." In days gone by, I sang along with it many times while driving to and from work. It helped me get through some times when the way ahead didn't seem all that clear.

P.S. I'm going through some of your previous columns, and right now am listening to the wonderful Patsy Cline singing "I Fall to Pieces."

Oh, my, what a voice! Gone way too soon.

Kudos to you for your efforts in putting these columns together, and also to Ronni for posting them as well as for posting the link to your previous columns.

Thanks for reminding me of "The harder they fall." I used to have the LP but it disappeared when I changed over to CD's. I must get myself another copy because every song on the album is a gem.

I remember seeing thee movie in a little theater here in SF. At one point, the audience was dancing in the aisles.

I've lurked at your posts for a long time but these artists have been the soundtrack to my life since the 1970's - I have to join the conversation.

I agree with everything you said. I love that you managed an entire post on reggae (isn't ska more toward heavy metal? like you, I don't care)without mentioning ganja or politics.

Of course, now that you've ruined Rivers of Babylon by reminding me of the Old Testament's brutality I may never read another column again :)

Thanks for a lovely interlude.
a/b

Wonderful, wonderful, wonderful, almost nothing better that Reggae. Thanks for introducing me to some groups and singers I had never heard of before today. I'm going to have to pull out those old Reggae cassettes I own and give them another listen.

Oh, and I used to skate to Johnny Nash's 'I Can See Clearly Now' at the roller-rink when I was a kid.

I won a silly 'spot' dance competition dancing to Israelites when I was, ahem... younger! Thanks for the great memories. :)