Home About Archive Contact
My Short, Accidental Foray in Politics
ELDER MUSIC: A Bit of Reggae in the Morning

AN OLD FRIEND AND A NEW FRIEND MEET
Tamar Orvell, who blogs at Only Connect, spends half of each year in Atlanta and the other half in Tel Aviv. A couple of years ago, I sent Tamar an invitation to my old friend, Sali Ariel's, art show opening in Tel Aviv and asked that she get a photo of herself with Sali for me.

Circumstances prevented Tamar from attending and other attempts for the two women to get together since then didn't work out. Until now. Here are Sali and Tamar at the opening of Sali's latest show a week or two ago. 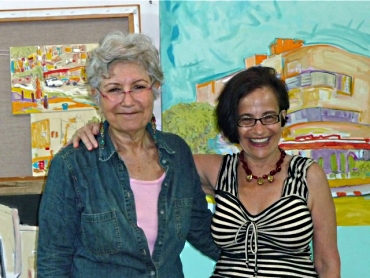 Those are Sali's Tel Aviv paintings in the background and here is another photo of Sali from the opening that better shows off her work. 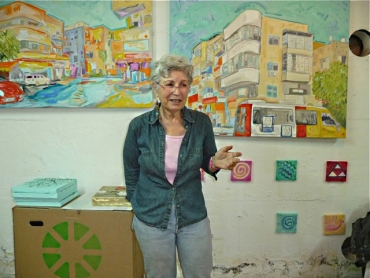 I've known Sali for about 40 years and Tamar via the internet for about three years. Isn't it amazing how these things work out these days. You can see more of Sali's paintings here.

JAPANESE ELDERS VOLUNTEER AT FUKUSHIMA
A group of more than 200 elders age 60 and older, many of whom are trained engineers and former power plant employees, have volunteered to work in the dangerously high levels of radiation at the Fukushima nuclear station.

“Volunteering to take the place of younger workers at the power station is not brave, Mr Yamada says, but logical. Mr Yamada has been getting back in touch with old friends, sending out emails and even messages on Twitter.

"'Even if I were exposed to radiation, cancer could take 20 or 30 years or longer to develop. Therefore us older ones have less chance of getting cancer.'"

You can read more here, and a hat tip to Jan Adams of Happening Here for forwarding this story.

DECORATING TIPS FOR A GREENER WORLD
My friend JoAnn Goldberg has a knack for finding the strange and wonderful on the internet. These are (not entirely serious) designs for a greener, healthier environment: 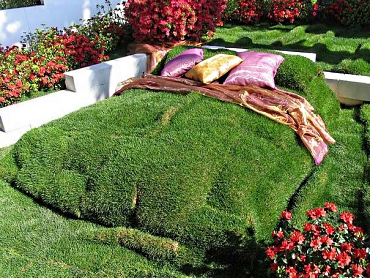 Okay, it's an eye catcher, but probably impractical. This one maybe not: 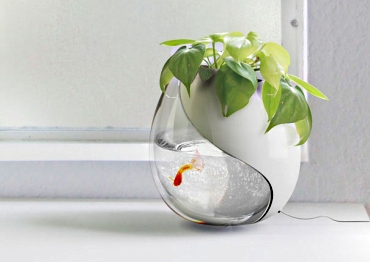 This one didn't surprise me; I regularly saw a Volkswagen bug covered in grass cruising around Greenwich Village when I lived there. 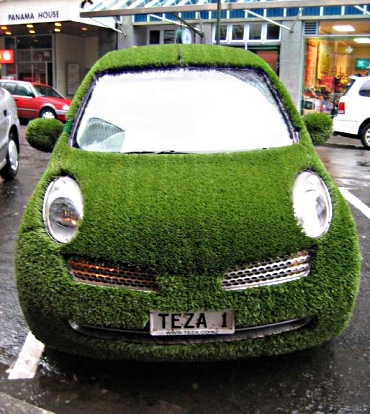 There are at least two dozen more photos of unusual uses for grass that you can see here.

AND WE WONDER WHY OUR KIDS DON'T LEARN
An enterprising, young reporter in Florida checked out fliers in Doral advertising high school diplomas – for a fee. To investigate, he pretended to be a student and after forking over some money, received

He asked five grade school students to complete the tests of three questions each, handed them in as his own work and passed with flying colors.

“On Wednesday, I was informed I had graduated. Last Friday afternoon, exactly one week after first reporting to campus, I handed over the remaining $339 and accepted my diploma...

“I was also given a transcript covering four years of purported classes, many with no relation to the tests.”

The “degree” from this “school” is accepted at Miami Dade College among others. Read more here.

MARRIAGE EQUALITY IN NEW YORK
Any day now, the New York State Senate will vote on a marriage equality bill. Polls show an overwhelming support in the state for extending marriage rights to gays and lesbians, but you never know what those politicians will do.

To help along the cause, the Human Rights Campaign produced a video of ordinary folks in support of the bill.

If you are a New Yorker, you can easily send a message of support to your Albany representative here at the Human Rights Campaign page.

CELL PHONE RADIATION
Recently, there was yet another report that cell phone radiation may be a danger to us. According to a report at Computerworld,

Several factors besides SAR contribute to radiation levels. Computerworld has provided a nifty tool you can use to search their database for the SAR level of your phone. Just enter the make and model of your cell phone here.

TAXING MILLIONAIRES
We've all read the stories about millionaires and billionaires whose income is taxed at a much lower rate than working stiffs, and who are also helped along by the Bush tax cuts which just celebrated their tenth anniversary.

Republican Congresspeople are hell bent on further lowering taxes on the wealthy, but here are some of those people who see it differently:

You can read more about this here.

WOMEN PROTEST GLASS STAIRCASE
Apparently, the architects of a new courthouse didn't have women in mind when they designed a glass staircase. This explains the problem:

SLEEPING NEWBORN KITTEN WITH MOM
Absolutely nothing happens in the video below that went viral this week - except the miracle of tiny life.

Since, for some people, cuteness alone is not enough, Discover magazine had to go all scientific on us about the instincts of cats:

”'As for that maternal cuddle', says Dr. Nicholas Dodman, director of the animal behavior clinic at Tufts Cummings School of Veterinary Medicine, it’s probably fair to call it a hug. Mother cats and human parents bond with their children via similar hormones, like oxytocin, so 'human analogies are not entirely inaccurate,' he says.”

“'To me it’s a perfectly natural example of maternal care and affection to a kitten who’s dreaming. They’re mutually bonded and I think they enjoy the presence of each other.'”

Anyone who's ever owned cats knows that. Okay, too many words, not enough video. I dare you to watch it only once.

There is no risk of cancer from cell phones. The frequency of cell phone radiation is about one millionth of that required to cause mutation of DNA (which causes cancers). To do so requires radiation above the blue limit, near the ultraviolet (or higher, of course).

I could watch that cat video all day!!

We have stairs here in a public building with no risers, so the effect is the same. No one has complained here (that I know of).

Love the grass bad and other links!!

I bookmarked Bored Panda the source of the grass pix, great site for a laugh when you need one.

I second Kenju, my former workplace had steel stairs with metal grate treads as well as no risers. Never caught anyone peering up though but then it wasn't in a lobby.

The cat video is wonderful, awww!

My kitty would surely enjoy the table with the lawn down the middle of it.

Kudos to the Japanese elders for their selfless contribution. Hard to imagine what that country is going through.

The 'see through and up' stairs problem reminded me that my workplace had to replace the flooring of 2 new elevators as it was deemed too reflective.

Huggy cat mom video is as sweet as anything I've seen.

Thanks for all these items of interest.

Also, love those millionaires, but just those particular ones.

Thank you Peter. You are right. Anyone wishing to get the true skinny from a very real physicist can find extensive, readable evidence at http://bobpark.physics.umd.edu/. Put "cell phone cancer" in the search area. There's no end to what nonsense people will believe, especially if it's scary.

Kudos to the very practical Japanese elders. I hope they are taken up on their offer.

Failing to consult women when designing buildings doesn't surprise me. Have you ever noticed that most homes don't include a "broom closet" -- though I hasten to add that home sanitation is everyone's job, but apparently, not if you are an architect and male.