GAY AND GRAY: Gay Marriage Comes to the Niagara Frontier 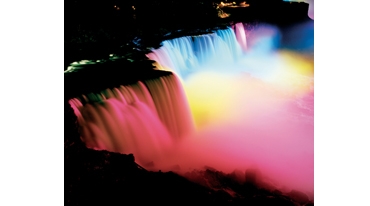 The beginning of legal same-sex marriages in New York State draws me back to my roots. Nearly 50 years ago, as soon as I was able to get away, I high-tailed it out of western New York state for more accommodating parts of the country.

Buffalo was no place for a lesbian to grow up in the 50s and early 60s. My high school mates intuited that I was different, very likely "queer," as well as socially awkward. A few tolerated me, but some were downright cruel to the lanky misfit I was in those days.

With this background, I'm following with interest gay developments in the far western part of the Empire State. We all know that New York City will be fine, but what about the boondocks by the lake?

Very well, thank you! Here are a few items from that often neglected part of the country.

• Western New York Republican State Senator Mark Grisanti bucked his own previous position and his party to cast one of the deciding votes for legalization. My former neighbor, Jeff Simon, long time Arts Editor for the Buffalo News thinks Grisanti's vote and gay marriage signal a huge boost for the long suffering region:

“I just committed political suicide,” Grisanti is quoted as saying after his “yes” was one of the two crucial votes that gave New York State back its reputation for progressivism and a passion for human rights and made this the largest state to have a same-sex marriage law...

“Mark Grisanti clearly agonized over his vote. He told reporters that his own wife had doubts. What he wound up doing, despite his reservations, was becoming one of two Republicans in the New York State Senate to make New York State the biggest weapon, thus far, in the fight to universalize same-sex marriage.

“It is inconceivable to me that in the events of last weekend, Grisanti didn’t make some of the most important friends a New York State politician can make. He might have thought it looked like an open grave.

“Unless my sense of the political world is completely absurd (always possible), I’d bet anything it was just the foundation people have to dig before they put up a sign for a skyscraper that reads “watch this space for further developments.

“For those given to hand-wringing over [Buffalo's] reputation, it’s hard not to think that he, like Kathy Hochul, [a Democrat unexpectedly elected to the Congress recently in a special election in a Republican area] did quite a lot more: they have completely re-identified upstate New York, and especially Western New York, from the area that gave the state the gubernatorial campaign of Carl Paladino [an embarrassing knuckle-dragging right winger] to the area that put Hochul into Congress and proved decisive in legalizing same-sex marriage in New York State.

• New York State has six separate Episcopal Church dioceses and therefore six Episcopal bishops. I knew the one we had when I was young as I went to school with a daughter. I thought he was a pompous stuffed shirt.

The current one, the Rt. Rev. R. William Franklin, is one of three in the state who is allowing priests to officiate immediately (before the church rewrites its services) at same-sex weddings. Even the Episcopal bishop in New York City isn't doing that. Who'd have thought it?

• Most amusingly of all, the community of Niagara Falls, long a sad locus of tourism gone completely tacky, hopes to boost its fortunes as a magnet for gay marriages. The tourist bureau has gone all in.

In an effort to partner tourism related opportunities with the passage of the Marriage Equality Act in New York State, the Niagara Tourism and Convention Corp. (NTCC), unveiled plans Friday to hold a group wedding ceremony on July 25 in Niagara Falls, N.Y., as well as a new ‘Rainbow Romance’ package on the agency's Niagara-USA.com reservation system.

USAToday caught the flavor of the region's excitement:

”NIAGARA FALLS, N.Y. — New York legislators had voted just hours before to legalize same-sex marriage, and already the phone was ringing at the Falls Wedding Chapel. It was a lesbian couple in central New York, looking forward to an August wedding after 28 years together...

“Richard Crogan sees the new law from two perspectives: He's president of the Main Street Business and Professional Association in Niagara Falls -- and he and his partner, Michael Murphy, are thrilled to finally be able to marry at the falls.

“He's envisioning a homecoming for gay people who left to marry elsewhere, including across the river in Canada.

"Those gay kids that moved out to be accepted can come back," he said. "New York state is their state. They can come home and be themselves."

My delight at all this doesn't go nearly far enough to lure me back to the region. But how can I not rejoice as a tolerant and creative wind blows away some cobwebs in the old home place?

This is such an exciting move. I'm jumping up and down and cheering this vote. I have two son-in-laws and a granddaughter who moved to Spain. I've never met that granddaughter...selfishly, I know. Think of all the other families out there like me that were split like this. I'm pleased for all of us with this decision.

Three cheers for Mark Grisanti, a very thoughtful and BRAVE man who knew his vote could lead to political suicide and cast it in the right direction anyway!

If only there were more brave politicians like Mark Grisanti the country would be in a better place. It's rare for me to admire a Republican these days, but Mark is on my hero list.

Praise be Mark Grisanti for voting his conscience. Take note all terrified Republicans who are too scared of the right wingnuts to do the same.

Meanwhile, back in Iowa, the battle goes on. We lost 3 Supreme Court Justices to the above mentioned wingnuts after they said Iowa's Constitution allows same sex marriage. It's been a rear guard action ever since their astonishing and landmark decision.

As gays and lesbians eventually gain the right to marry, they will also gain the right to split, having custody and property battles like the rest of us. I've heard that it's very difficult for a same sex married couple to get divorced, as the laws haven't kept up with the reality. Be careful what you wish for, folks, and be ready to take the bitter with the sweet.

I write about tough Americans who survived the thirties, but in addition, anybody who's "different" and survived the 50s should be very, very proud of themselves. It was not easy.