This week's collection is heavy with animal video. Perhaps it's my way of relieving the affect of the bleak headlines that confront me in my daily internet rounds. How can anyone not love the perfect being-ness of animals. Wild or domestic, they are what they are, no pretenses and with our pets, all they want is to love us. Speaking of unconditional love...

“After a long 9 months apart, our dog, Emmitt Thunderpaws, is REALLY HAPPY to see his favorite person again! He smelled him in the house and then ran outside to greet him. Dogs are awesome.”

Did you know there is an entire website devoted to videos of military homecomings? You can see it here.

SAVING A GIANT LOBSTER
Many years ago, a friend invited me to lunch along with six other of his friends for a giant lobster feast. Giant in the sense that the lobster weighed 23 pounds. It was an amazing lobster and an amazing meal, and it put to rest the myth that big lobsters are tough.

Recently, an 18-pound lobster met a better fate. He (or she) was headed for the cooking pot when the bookkeeper at the seafood company took pity and found the lobster a home at the New York Aquarium. 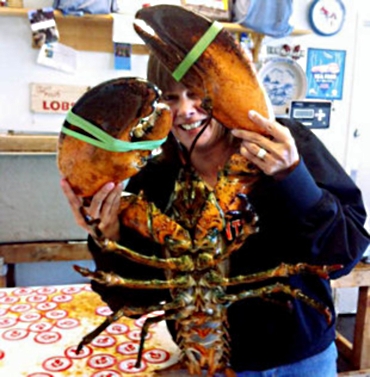 AFTER NEAR EXTINCTION, OTTERS RETURN TO ENGLAND
In the mid-1950s, most of the otters disappeared from all of England due to the poisoning of rivers from chemical pesticides. A cleanup was begun, fish returned and last week, it was announced that with otters having been spotted in Kent County, the animals have repopulated the entire country.

”The otter's return represents a happy ending to one of the worst episodes in modern British wildlife history: the sudden disappearance of one of our most widespread and charismatic mammals.” 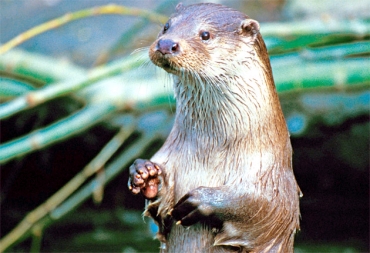 You can read more about this happy outcome here.

SPEAKING OF THE ENVIRONMENT
Jan Adams, who writes the monthly Gay and Gray column here at TGB, has begun a weekly series about climate change at her Happening Here blog.

Naming the new feature Warming Wednesdays, Jan posted the first entry this week about how islands will be the first land masses to be affected by rising seas. You can read it here.

SHORT FILM WINNER
A while back, Philips Cinema held a film contest in which amateur entrants were to shoot a short feature with just five lines of supplied dialogue that could not be altered or added to. The dialogue was this:

What is that?
It's a unicorn.
Never seen one up close before.
Beautiful.
Get away.
Get away.

Here is the grand prize winner titled, Porcelain Unicorn, directed by Keegan Wilcox. It's not what you think it might be and it is gorgeous. (Hat tip to Darlene Costner)

You can watch all top five winners here.

THE DOG AND THE DOLPHIN
On Tory Island off the northwest coast of Ireland, there is a dog who makes a daily trek to the ocean to swim with the dolphin who hangs out in local waters. I wish the video told us more about the two, but it's charming anyway.

TATTOO HEALTH MONITORS
When I was a kid, tattoos were for mostly for sailors. Nowadays, they are for just about everyone except me – or maybe not. Temporary tattoos may soon be coming to a hospital or doctor's office near you.

”The first generation of medical patches can monitor electrophysiological signals associated with the heart, other muscles and brain activity. But in future people may benefit from patches that go beyond this passive role...”

You can read more about these medical tattoos here.

JON STEWART EVISCERATES RIGHT WING ECONOMICS
As many have noted, comedian and host of The Daily Show, Jon Stewart, often does a better job of news commentary than the biggest of big-name pundits. He doesn't nail it every night or even most of the time. No one can. But when he does, he is splendid.

On Thursday night, he smacked down the right wing's attack on billionaire George Soros' call for the wealthy to pay more taxes. It is breathtakingly brilliant. Here's the segment; it is longer than most videos I post, and worth every minute:

MUSIC TO PLAY US OUT AGAIN
They are called The Jazz Aces and we again have Darlene Costner to thank for this fabulous feel good video of the song, Bring Me Sunshine.

EDITORIAL NOTE: Interesting Stuff is a weekly listing of short takes and links to web items that have caught my attention; some related to aging and some not, some useful and others just for fun.

Very good pick on the videos -- especially the one on the poor! -- barbara

You jut gotta' love John Stewart. My daughter wants him to run for president, but I told her he is more effective doing just what he does best.

The volley ball dog and the dog that swims with the dolphin are really wonderful, but the dog that welcomes his master back is the more heart warming dog of all.

Memo to me: read your comment before sending and not after. I JUST gotta' remember that. ;-)

Loved Jon Steward. He was so right on! bkj

Yes, I love Jon Stewart too. But it brought tears to my eyes as well to see those clips.

The short cinema winner was so touching. I will watch all of them later. Thanks for posting.

Love your interesting stuff! I always look forward to it. And yes, I am a Jon Stewart fan, too!

The unicorn made me cry and the jazz mad me laugh!!

Nice focus on dogs for a change.