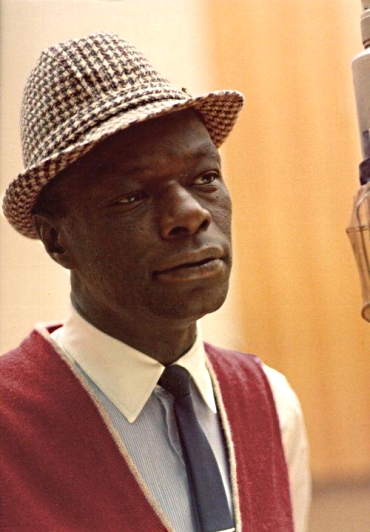 Nathaniel Cole was born in Montgomery, Alabama probably in 1919 (there’s some confusion about his birth year, but that’s the best bet) and the family moved to Chicago when he was 14.

He started piano lessons at the age of 12, learning the classics. He picked up jazz and gospel music as well. He was inspired by the playing of Earl Hines and later he and his older brother Eddie, a bass player, formed a band. They performed regularly around town and started touring.

When in California, Nat took a liking to the place and decided to stay. It was there he formed the King Cole Swingers, a group that eventually became the Nat King Cole Trio. You don’t need me to tell you about all the great music he’s given us over the years, his ground-breaking TV program and appearances in films.

He died in 1965 of lung cancer, almost certainly due to his life-long smoking habit. I’ll just get on and play the music. 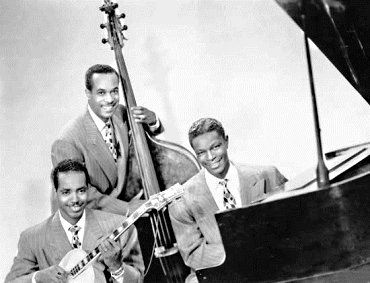 Most of the tracks used today are by the Trio. The group consists of Nat on piano and vocals, Oscar Moore on guitar and Wesley Prince on bass. They originally had a drummer but he left before they had any great success and it was decided that they wouldn't replace him. Wesley was later replaced by Johnny Miller and still later by Charlie Harris.

These tunes demonstrate what a great jazz pianist Nat was, something that’s rather forgotten, overshadowed by his career as a singer. They also show what a fine ensemble the trio was, as good as any jazz trio around I’d say.

Legend has it that Nat's singing career didn’t start until a drunken barroom patron demanded that he sing Sweet Lorraine. In fact, Nat has gone on record saying that the story was fabricated but it sounded good, so he just let it ride. When the truth and legend collide, print the legend.

In reality, from the beginning he occasionally sang between instrumental numbers. 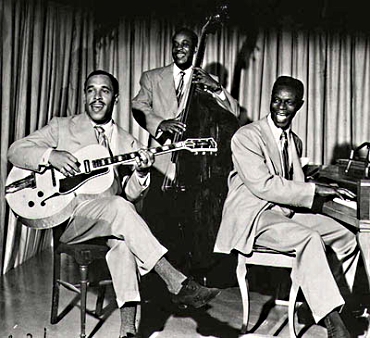 As a demonstration of the group’s jazz credentials, here is an instrumental written by Nat called Early Morning Blues.

[UPDATE: Some people are having trouble with the playback of this tune, Ronni included. It plays fine on Peter's computer. We haven't found a fix.] 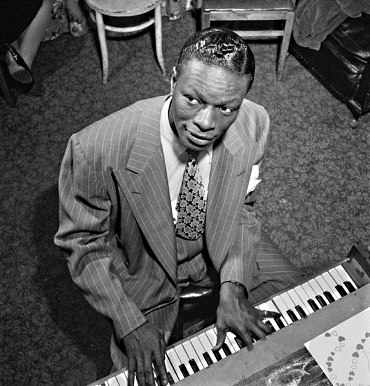 The song that legend suggests started Nat’s singing career, Sweet Lorraine. It was written by Cliff Burwell and Mitchell Parish in 1928 and Rudy Vallee and Teddy Wilson recorded it rather successfully before Nat’s version trumped everyone else’s. 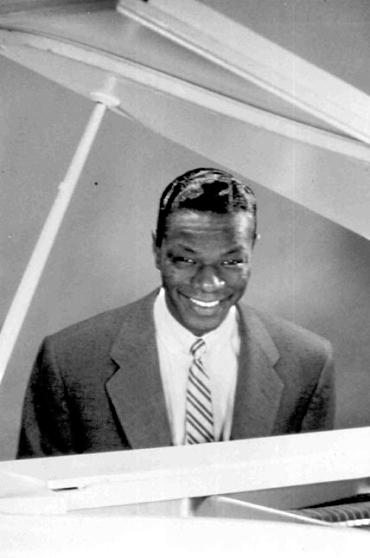 It’s Only a Paper Moon was written by Harold Arlen, Yip Harburg and Billy Rose for a Broadway play called The Great Magoo. The Magoo was a failure, just in case you haven’t heard of it.

The song has been used in several films, most notably in Peter Bogdanovich’s Paper Moon that starred Ryan O'Neal and introduced his daughter Tatum to the world. This is Ryan’s best film.

♫ Nat King Cole Trio - It's Only A Paper Moon 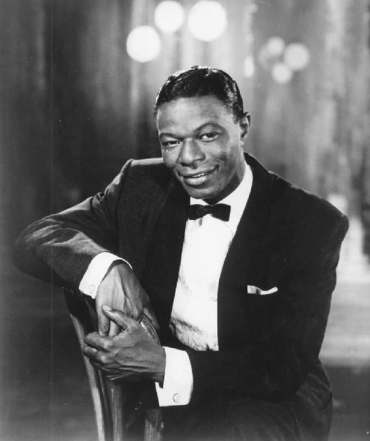 I thought I’d go with another moon song. Actually, Nat has half a dozen or more moon songs but I won’t play any others or this would degenerate into Nat playing moon songs, and that’d be a bit boring. The song is No Moon at All, written by Redd Evans and Dave Mann.

♫ Nat King Cole Trio - No Moon At All 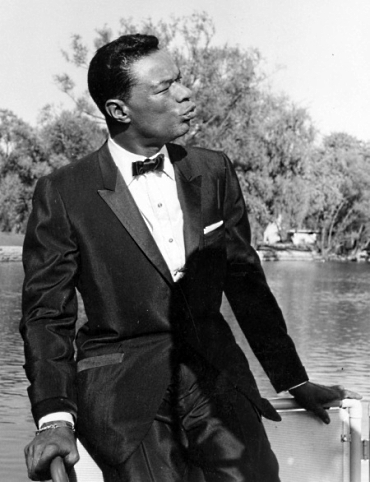 The next song is not the one that Sam Cooke sang to great acclaim. This is one Nat himself wrote, You Send Me. 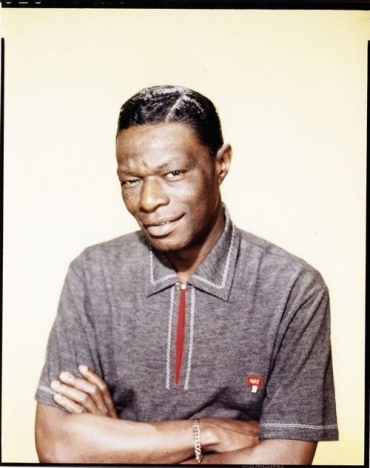 The song Nature Boy was written by eden ahbez and yes, he did affect the lower case spelling. Eden (I wonder if he capitalized his name at the beginning of sentences) was born George Aberle in Brooklyn.

He also became a hippie at the time, growing his hair long when that was distinctly frowned upon for a bloke, grew a beard and ate only raw fruit and vegetables. One day he approached Nat’s manager after a show and gave him the music for Nature Boy. Nat started playing it and his recording spent eight weeks on top of the charts. 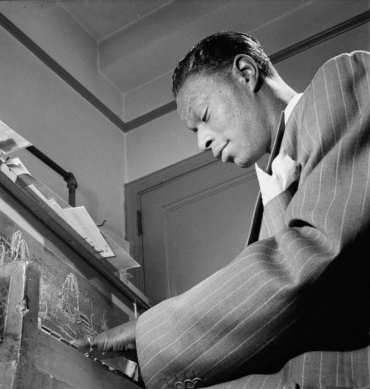 Another instrumental to illustrate the group’s prowess. The writer of this tune is unknown, according to the CD notes. It’s Syncopated Lullaby. 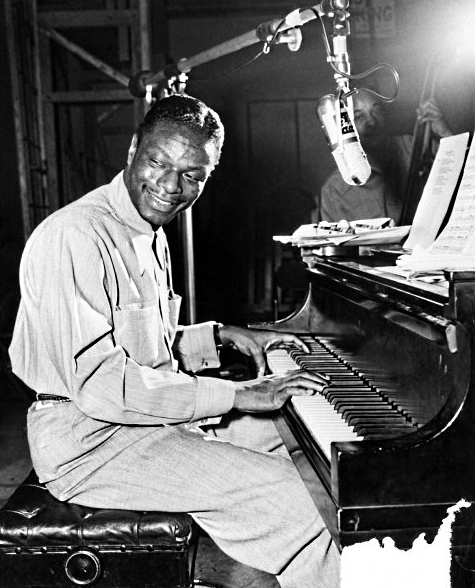 I had Straighten Up and Fly Right in my short list but I hadn’t originally included it. When I mentioned to Norma, the Assistant Musicologist, I was doing a column on Nat this was the first tune she mentioned. “Mandatory,” she suggested.

That’s good enough for me, at least it was when I went back and played it again along with the other tracks. It’s a song Nat wrote in 1943 in Omaha, Nebraska, when he had nothing much to do during his off-hours but write music.

It was an instant hit, especially with soldiers serving overseas. 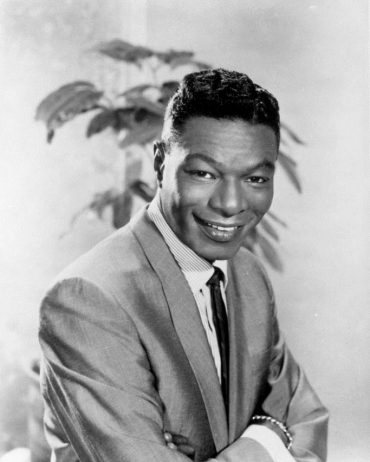 I wouldn’t ordinarily play this next tune in this column but it was a particular favorite of my mum’s (as was Nat) so I’ll include for that very reason. Ramblin' Rose.

Nobody is as smooth as Nat. My mom liked Ramblin'Rose too.

Something weird was on the first track, sort of like space music! Is it my computer or your recording that messed up? Love Nat!

Kathleen...
Yeah, something's wrong. I tried uploading it again, but it's no better. I've sent a note to Peter but since it is the middle of night in Australia, he is undoubtedly asleep and won't get to it for a few hours.

I always loved "Nature Boy" and with your back story, I love it even more! Thanks for adding to my understanding and appreciation of jazz.

Although jazz isn't my favorite kind of music, I do like Ramblin' Rose as sung by the man with a voice smoother than silk.

And, it's good to get educated about all genres of music.

I'm playing it now for the fourth time ... some interesting sounds, but nothing that wouldn't have been made by those super-skilled, creative musicians on those instruments.

Toward the end, it sounds like the bass is playing "I'll be down to get you in a taxi, honey."

If I keep playing this piece, I might start liking jazz!

Nat King Cole was a class act. I like some jazz but I'm not a huge fan of the genre. However, I love Nat King Cole and you've posted just some of the reasons why. Thanks for the memories.

I'm playing it now for the fourth time ... some interesting sounds, but nothing that wouldn't have been made by those super-skilled, creative musicians on those instruments.

Though he died before I was ten years old, I've always enjoyed his music. But a couple of these were new to me.

FYI, I had audio trouble with "Early Morning Blues", "You Send Me", and "Syncopated Lullaby"

No audio trouble here. What a guy! (I mean Nat of course.)

Yeah, Cole was great singing music I prefer -- jazz. The first time I ever heard his voice was on an old 78 singing a ballad, "Sea Breeze." I've searched everywhere but never been able to locate his recording -- others haven't been able to find it either.

"it was a particular favorite of my mum’s (as was Nat)". Funny, it was my mum's favorite too..as was Nat. I heard her play that one album many times. I guess that's where I got my appreciation for his music. He's one of my favorite male vocalists. :-)

My parents used to walk up to some bar in Omaha to hear the King Cole Trio. I'd be interested to know where he played in Omaha.

he was the best singer that ever lived now or dead.because what he sang was love that's what the world needs plenty of😉