NEW 9/11 PHOTOS
It doesn't feel like ten whole years have gone by since the terrible tragedy on a brilliant, blue-sky morning in New York City. Everyone there and, no doubt, throughout the country has their story of that day. Mine is here.

This week Time magazine published a slideshow of never-before-seen photographs of that day taken by James Nachtwey. 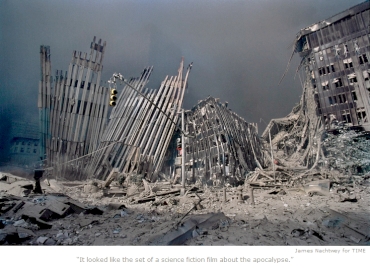 You can see the whole slideshow here with commentary from the photographer.

TWIN TOWERS MOVIE CAMEOS
I recall that after the 9/11 attacks, the producers of Law & Order removed the towers from the opening credit sequence of the television show. Before the tragedy, the World Trade Center was a favorite of movie makers, an icon that instantly said, New York.

Now comes this video montage of just about every cameo appearance the Twin Towers made in movies. Watch the lower left corner for the names of the films as the clips go by.

BUILD YOUR VOCABULARY
You will be hearing this word a lot from now on – graphene – and it's going to make a difference in our everyday lives. According to a report from the BBC:

"Our research establishes graphene as the strongest material ever measured, some 200 times stronger than structural steel," mechanical engineering professor James Hone, of Columbia University, said it a statement.

"It would take an elephant, balanced on a pencil, to break through a sheet of graphene the thickness of Saran Wrap.

You can read more here and here, and here's a video of some possible consumer uses of graphene:

1930s FASHION FORECAST FOR YEAR 2000
Keep your eyes peeled for at least three predictions that were on the money.

BABY LAMB BORN DURING HURRICANE
A brand new life at the Central Park Zoo in New York City during a horrendous storm and, of course, she is named Irene.

THE MAN WHO BUILT A BETTER BOX
Jan Adams alerted me to an obituary in The New York Times of 92-year-old Keith Tantlinger. Never heard of him? Neither has anyone else outside of certain transportation circles, but what he did changed the world.

His invention 60 years ago is a mechanism attached to the eight corners of large shipping containers allowing them to be locked together and thereby move many at a time as a unit by crane.

“More than any other innovation, the modern shipping container — by turns venerated and castigated — is now acknowledged to have been the spark that touched off globalization.

UNINSURED MAN DIES OF TOOTHACHE
A Cincinnati man, age 24, died of a tooth infection because he couldn't afford the prescribed medication. But we don't need universal health care, right? Watch the video and read more here.

FLASH MOB TRIBUTE
According to the YouTube description, this video

”...was organized by Kim MacGregor...as a tribute to her best friend Erika Heller who died of colon cancer last year at age 31. Each and every telephone conversation they ever had, Erika would end by telling Kim, 'You're an amazing woman!' Kim wanted to do something special to honour her friend and this is the result.

“It was filmed at the Toronto Eaton Centre after only one six-hour rehearsal.”

ELK UP A TREE
Honest. It's true. In Sweden, a man found an elk stuck in a tree. Thom Hartmann reports:

Somehow I missed your 9/11 story the first time, Ronni. Thanks you.

Your 9/11 story brings that day back in vivid detail. It changed America in ways none of us could have predicted.

I was once on the roof of one of the towers and now I have mixed emotions when I remember that visit. Such a senseless act of terrorism and so very devastating.

As always, some fascinating Saturday stuff. Highlights for me: 9/11 photos I hadn't seen & the flash mob clip. I love these flash mob events. There's a spontaneous joy about them, like in jazz.

Graphite (carbon)-fiber impregnated epoxies have provided greater-than-same-weight-steel strengths to airplanes for some years now. Now researchers/engineers are trying to figure out how to make graphene (carbon) sheets economically, so that they might be incorporated into composite materials.

Ten years later the USA is still at war and deeply in a financial hole largely because of it. Everyone would have been way better off mourning their losses than seeking revenge. Very very sad.

But the flash mob was uplifting. Good for Kim!

That elk sure looks a lot like a moose!