We should have had enough until 2021, I would think, but there are some items I want to include today making this Interesting Stuff 9/11 heavy – by about a third of it.

JON STEWART REMEMBERS 9/13/2001
Once again, The Daily Show makes real something I hadn't or couldn't articulate that had been bothering me and last Monday he nailed it perfectly.

FRANCE REMEMBERS 9/11
Claude Covo-Farchi of Photoblogging in Paris photographed this message of solidarity with the U.S. on 9/11. Nice of them to translate for dummies like me who are ignorant of the French language. 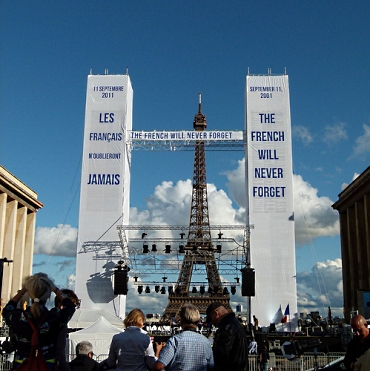 WHAT A DOG DOES WHEN HE'S COLD
Darlene Costner sent along this video. Damned clever dogs can be.

BRITS FAVOR FACEBOOK OVER TOILET
The London Science Museum surveyed 3,000 adults about what they could not live without. Facebook came in number 5, four points above the flush toilet at number 9.

There is a serious side to this poll. For that and the full list of 50, click here.

ROMANESCO
At the farmer's market last weekend among the broccoli and cauliflower, I came across this visually stunning vegetable. It's beautiful but also reminds me a little of something that could have been included in The Little Shop of Horrors. 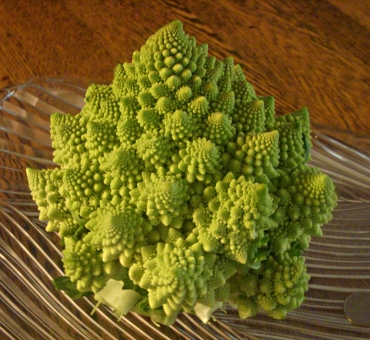 It's called Romanesco and I bought one. It tastes sort of like broccoli and sort of like cauliflower only milder and it almost broke my heart to break it apart to cook. You can find out more about its biology and mathematical properties here.

GOOGLE CENSORS OUR SEARCHES
Not just Google – other search engines too. You and I can search the same word or phrase and get entirely different returns depending on what the search engine knows about us from our past searches and other information.

Eli Pariser, former executive director and now board president of MoveOn, calls this the Filter Bubble. He's written a book with that title and he recently gave this short talk on the subject at a TED conference.

You can find out more at the Filter Bubble website and read the 10 Ways to Pop your filter bubble. (Hat tip to Marion Dent)

101-YEAR-OLD WOMAN WITH AN 81-YEAR-OLD CAR
Both Margaret Dunning and the Packard roadster are running just fine. Take a look at this terrific video Darlene Costner found for us.

EEEEEEEEK!
It's a good thing this worm is magnified 525 times and lives near hydrothermal vents nearly a mile below the surface of the ocean. 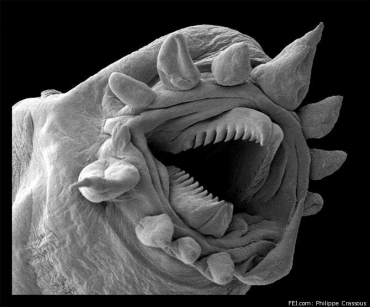 Back in July, this horrific creature was all over the web but maybe you missed it. The Huffington Post story is here.

The worm was photographed by Philippe Crassous with an FEI electron microscope. The FEI company keeps a Flickr photostream of all kinds of nano objects. I lost about two fascinating hours clicking through the images – even if I don't understand what most of them are. 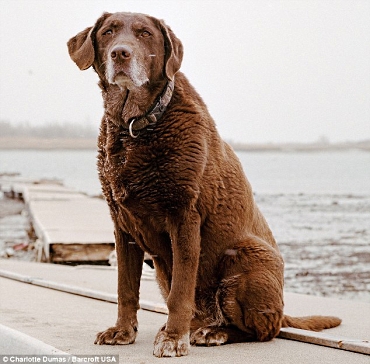 That's Moxie, now age 13, who worked as a rescue dog at Ground Zero for eight days searching for survivors. She's one of nearly 100 who traveled from all over North America to help after the attack on the World Trade Center.

Now, just 12 of those hard-working dogs survive. Dutch photographer Charlotte Dumas traveled the U.S. to capture their images and tell their stories in a book titled, Retrieved. You can see many more photos here.

Always good stuff here, Ron.I love seeing the dogs, and the worm? I think I dreamed about that as a child (EW)!!

I don't know what happened to the last part of your name - LOL
Sorry, Ronni!

Once again John Stewart nails it. When will they ever learn?

Kenju...
No apologies. Many people call me Ron and a whole lot of others call me just, RB.

As it happens, I'm reading Steven Levy's In the Plex, a revealing history of Google. I highly recommend it to anyone who wants to know more about the web "filter bubble" we live in.

Romanescao is too pretty to eat. It looks like and exotic flower. I have never seen it in my stores and probably never will, but I am sure I would love it since I love all vegetables with the exception of Okra.

Nice collection, but oh, that is one ugly worm. Glad I'm home from the beach and won't be going in the water again for another nine or ten months!

The bit about search engines is very scary, & got me to thinking. The latest pop-op on yahoo my current home page, is about single local men I may want to "hook-up" with!! It's crazy. Maybe their filter isn't working very well. :)

And the clip about the 101 year old with that wonderful car: wouldn't it be great if all 101 year olds looked & acted like that lady? Thanks again, Ronnie & have a great w/end. Dee

BTW, I'm sure glad you're back. The separation anxiety was awful:) Dee

Thanks for the bit about the Google [and other] bubble. Big Brother exists and he re-enfores our worst habits because that algorithm acts like us. As Pogo said: we have seen the enemy and he is us.

I always enjoy the items you share here. I welcomed your initial reference to TED a few years ago and now this video -- information and privacy issues long since of concern to me.

I noticed some time ago Google had made some supposedly more efficient changes to their Search. The result for me often has been a notably poorer selection of choices -- I have to spend MORE time scrolling to find the pertinent information for which I search. Frankly, I frequently get disgusted with the whole process now.

I think Google is incredibly presumptuous to think they know what I may be thinking and what has prompted me to search for any given word or topic.

I shudder to think how poorly informed people in the future will be if the info they receive is narrowed as is happening.