I spent a lot of time last weekend watching the #Occupy protests around the world but especially here in the U.S. With the number of demonstrators steadily increasing over the past four weeks and Wall Street titans whining to the press, it is clear a chord has been struck - an idea that however messy and disorganized it seems right now, resonates deeply with the world's 99 percent.

Not to mention with the one percenters too. You know something important is afoot when the elite deign to notice the rest of us. Listen to their attempted ridicule:

“'Most people view it as a ragtag group looking for sex, drugs and rock ’n’ roll,' said one top hedge fund manager...

Of course that is demonstrably not so. Actually, cartoonist Tom Tomorrow nailed it well (click here for larger image): 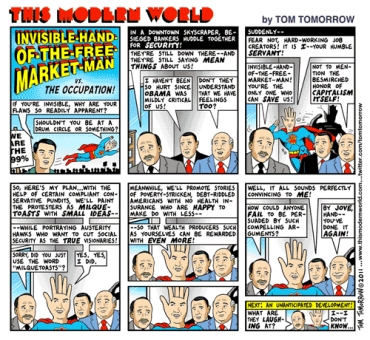 The traditional media – that part that shows a modicum of serious interest in what's happening - keeps wringing its hands over the #Occupy movement having no leader and no list of demands, which only means they are too attached to the elites to understand.

It is enough, for now, as #Occupy is still gaining steam, to say that it opposes the corporate takeover of the economy. There will be specifics when the time is right." (It is helpful in this regard to read this from Mike Konczal of the Roosevelt Institute.)

With all public institutions now owned by the elite (big example: against all rational thought, the Supreme Court granted personhood to corporations) and so many rights removed from the rest of us, the traditional channels of democracy are no longer available. That leaves street occupation the only avenue available for the people to right a wrong.

It certainly cannot be done through the ballot box any longer as state after state institutes restrictions on registration and voting. When a friend pointed out that when the only way to win is to rig elections you have already lost power, I realized how desperate the elite is and how dangerous that could become for the demonstrators.

But that means too, I think, that we are poised in a moment of promise. I worry that colder weather might shrink and dilute the demonstrations. I worry (and almost expect) that the protests, one way or another, will be crushed by the elite. But I also sense that, setbacks or not, this is not going away.

It's important to remember that success will take not weeks, nor even months, but a long, long time. What needs to change is too big and too complicated to not cause a lot of disruption and discomfort all around. All struggles for social and economic justice are hard to do and hard won.

But watching all those demonstrations over the weekend and reading the internet and twitter feeds from the protests and watching videos of the gatherings, chants and arrests, I felt some hope for the first time in several years.

So often since 2008 and even before, many asked when there would be an uprising, an awakening. The time, finally, is here.

It was terrific, as I watched, to see the gray hairs scattered at the barricades. This is a young person's movement, but there is plenty of help and support for elders to provide.

At The Elder Storytelling Place today, Mickey Rogers: No Respect

Here in San Francisco, local police busted up the small encampment last night. This isn't (yet) making people go away, but it is hard getting your tents torn down repeatedly. They've called for folks to rally at City Hall today against the police action and many will. It is a danger to this movement that folks will get bogged down in protesting (often outrageous) police behavior and lose focus on the anti-greed message.

But of course the dangers are manifold from all directions.

Meanwhile, you might enjoy this delightful picture my friend Brad has posted. Two flavors of protester; both part of the 99 percent.

Lots of us intermingled with the kids. Love it. I've latched on to one small bit and am suggesting it to those who can....switch to small local banks and away from the big guys. "Bank Transfer day" they called it. BofA made a terrific profit this quarter.

My heart is with those in the trenches, but my body can't follow it. I really wish I could add this grey head to the activists because I have preached for this movement for a long time. At last Americans are using the only power we have left. I do hope it continues to grow.

Cold weather didn't stop the protesters in Wisconsin and maybe it won't stop the disenchanted youth either.

I proudly marched with Occupy North (San Diego) County in Encinitas, CA last Saturday. It was peaceful but passionate -- a lot like many of the Civil Rights protests in the '60s

The media only featured pictures of the rowdy ones then, and that's what they're trying to do now. But the social media are preventing this from happening today. We are showing the march of good, middle-class Americans, many of whom have white hair. And many of the Elders I talked with Saturday had also marched for Civil Rights in the '60s!! Just goes to show that passion for the rights of people, no matter what color or class, still lives in America and all over the world!!!

I, too, just love the elite whining! It's delicious! Cluelessness on parade!

Why, they snivel, don't we appreciate all they've done for us? Thanks, guys, you've done quite enough. You should have stopped around 2006, actually.

The sad part is the letters to the editor column in my local newspaper. Obviously not-very-well educated people write furious anti-protester letters, parroting right-wing talking points about "taxes" and "job creators." Isn't there a new mental illness category called "self-defeating personality disorder"? If not, there should be.

Nonetheless, our local protest in the park grows daily.

i stood with about 60 others of all ages on the square of our city for five hours on Saturday and we're going to keep doing so until further notice. We are hoping that our numbers will grow and grow. That virtually every one who passed us honked and waved tells me that we're really on track. Even better, we were two blocks from City Hall and never saw a cop. In fact, the Mayor stopped for a few minutes! He didn't speak but his presence spoke volumes. We elders were well-represented and that made me proud.

Dallas has an "Occupy" group but even the small town north of Dallas that I live in, Denton, has one and has their own Facebook page at Occupy Denton

I hoping to get by there this week and visit with the people there in hopes of finding a story to blog about.

Montreal is standing shoulder to shoulder with other Canadian cities, (Toronto and Vancouver) in a peaceful occupation of Victoria Square downtown.

There are tents, a health clinic. Food, hats, etc. are being donated by people of all ages.

Protesters are all ages.

So far, the area is squeaky clean.

This would be a good time for Montreal seniors to sit in for more efficient public transportation.

So far, police have not interfered with the sit in, but they are monitoring it.

I can't help thinking about all the famous 60's protest singers, many still play clubs.

Imagine if those sixties singers such as Bob Dylan, Crosby, Stills & Young, and all the others who sang for change, got together with today's entertainers and did a grand tour, covering every protest park in North America?

Montreal is mighty cold in the winter.

Stores should start stocking up on red lumberjack long johns, the ones with a button back door. Things will come in handy.

I just don't see this movement going anywhere. I can't see it influencing policy or getting sympathetic politicians elected. If the participants feel better letting off steam, then good for them. However, I would rather see them pounding the pavement for Elizabeth Warren, Alan Grayson, and/or politicians like them.

In the meantime, the Kochs are busy as bees with their operation RedMap. http://www.npr.org/2011/10/06/141078608/the-multimillionaire-helping-republicans-win-n-c

If we want to change how things are done in Washington and Wall Street, then we should take our cues from the Tea Party and start at home.

Thanks for sharing your thoughts, Ronni. We have two occupy movements here on Cape Cod. I'm so glad the 99% are finally reacting.

At last! I'd love to be there with them. So much has changed for the worse since Reagan's so-called "morning in America". I strongly believe that's when right-wing extremism began to rear its ugly head once again, and absolute free market ideology began to trump the idea of community. We know we're not headed for a good place when a member of the audience applauds letting an injured, uninsured 30-year old man die, rather than support a law that would guarantee that he had insurance.

Carol from CO has a point. The right wing began taking over local politics and now they're going nationwide. I keep hoping the "silent majority" will come to their senses and see what these guys are all about, but this time I'm not sure that will happen. People are running scared, which is understandable, but that's when demogogues and idealogues are most likely to prevail. All we can do is fight back and hope it's enough in the end.

Thanks for the links. I've got a lot of reading to do. :)