Home About Archive Contact
ELDER MUSIC: 1966
An Open Letter to Arthur S. Brisbane at the NYT

The intention was to write about something else for today, but there were other obligations on Sunday and the time set aside for writing today's post was, instead, spent with The New York Times - in particular, the newspaper's extensive collection of slide shows.

It had been three or four weeks since I had indulged this mini-passion so I lost more than a couple of hours and enjoyed every second of it. Still shots give us time to contemplate in a way that video doesn't allow.

My intrigue with this Times feature began some years ago with Great Homes and Destinations – the real estate section. I like peeking into people's homes and so every couple of weeks I catch up with such slide shows as House Hunting in Ireland – in this case, a grand home in northern County Cork.

(All links in this post will open on the first photo of each slide show at The New York Times website.) An ongoing home series is What You Get For $380,000 (or some other price) which usually involves six or seven photographs each of three different kinds of homes in three U.S. cities. 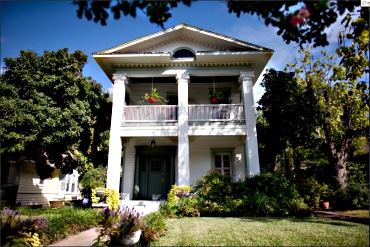 Yesterday, there was a fascinating series of photos of an eight-bedroom home that is currently a hotel and restaurant, for sale in Romania. 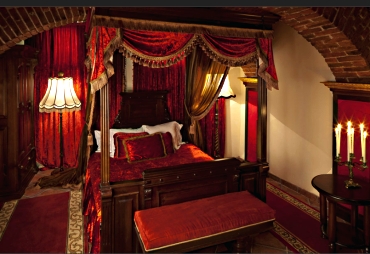 Links to slide shows other than real estate began showing up a few years ago and nowadays, I'm almost an addict.

They are well designed for easy interactive use. When there is a accompanying news story, there is link to it labeled “Related” to the right of the photos. You can click forward and backward through the photos one by one and at the end, there is always a link to the first slide.

Some good ones I enjoyed yesterday included candids taken with hidden cameras from a global study of at risk wild mammals. This is an ocelot from Costa Rica. 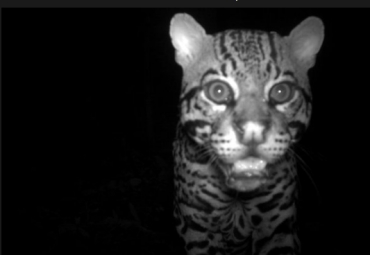 In the world of fauna, there is a slide show on carnivorous plants to go with a story about how increasing numbers of people are using them in their gardens. 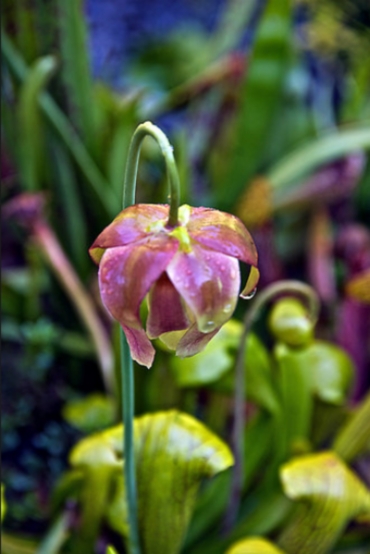 And I liked seeing this series of photos about how college students are dressing up in more formal styles than in many years. This young woman is from Columbia University. 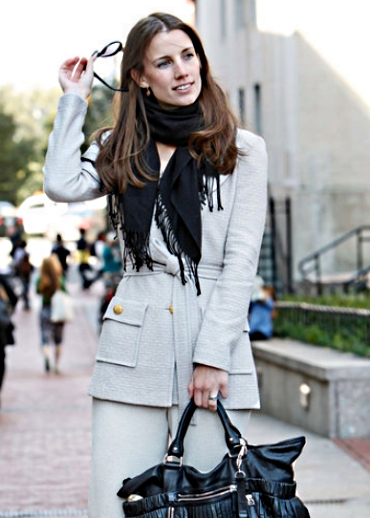 It is no secret to anyone who knows me that I miss living in New York City. I miss it every day.

I miss it when I walk the equivalent of 10 or 12 city blocks to the grocery store here and see five other people along the way rather than hundreds. When there are four or five store fronts to peer into instead of 80 or 90. When I hear no voices in the street instead of 10 different languages.

So I particularly like slide shows about the city. They remind me of what I'm familiar with and show me the changes that are taking place.

Chess hustlers are a long New York tradition. I used to stop to watch when I walked through Washington Square Park. 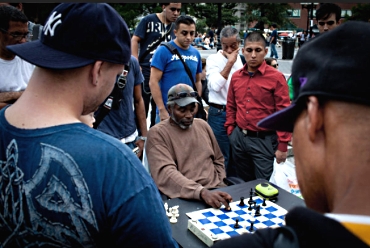 There are always amazing new things to see in New York City. One slide show tells of an exhibit in Times Square for fans of the TV show, CSI where visitors can analyze three crime scenes themselves. 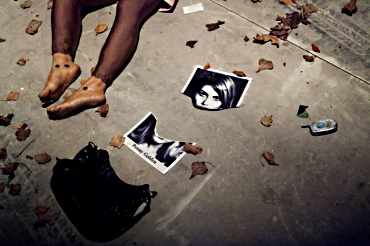 Over the years, I've looked at several slide shows that reveal how New York is big and densely populated enough to support the very smallest of businesses like this niche one, a violin shop where the owner opens only by appointment and caters to finding just the right size violin for young, small students. 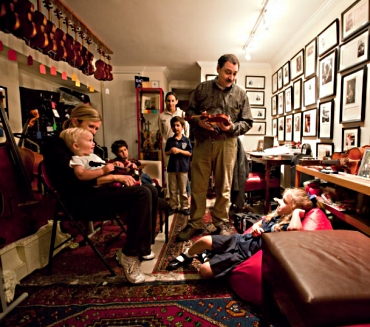 A Paris photographer, Yann Arthus-Bertrand, has published a book titled New York From the Air about the geometry of the city. The slide show gives us a sampling including these houses in Long Island City, Queens. 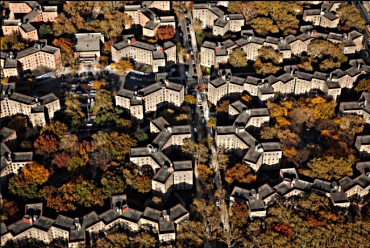 After more than two years, Sam Sifton recently closed out his tenure as the Times' restaurant critic with a “last meal” at Per Se. His story included a slide show of this fantastic and fantastically expensive eating establishment in the Warner Center at Columbus Circle. I'll never have a meal there, but I enjoyed the photos. 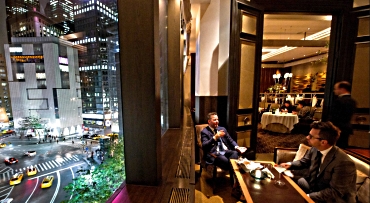 There are poetry slams in bars, restaurants and dedicated clubs every night of the week in New York as shown in a recent slide show about this kind of nightlife. This club isn't far from where I lived. 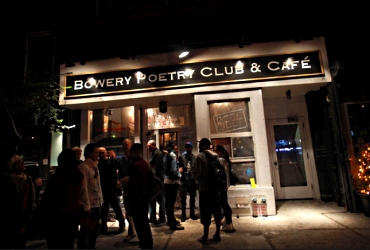 This last one about cheese got really personal. Most of the photos are from Murray's Cheese Shop on Bleecker Street where I was a regular customer for 25 years. The slide show is mostly of the cellar where the cheeses are aged.

Rob Kaufelt in the photo below has owned the shop for the past 20 years, but Murray's goes back the early part of the 20th century and was housed in two smaller, more intimate and homey places before it moved to its current location. 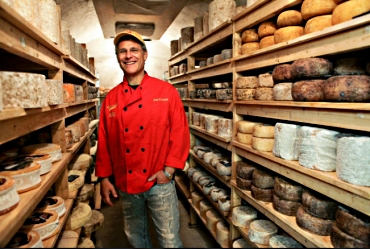 Maybe these slide shows are a pleasure peculiar to me. Maybe other people look at them only in relation to reading an accompanying news story but in my case, it often works in reverse; I read a story I previously ignored because the slide show piqued my interest.

If you haven't discovered these slide shows, you might find them a pleasant and informative distraction too. The homepage of the main multimedia section lists the newest slide shows along with other image features and you can search topics of interest going as far back as the year 2000.

Just got back from a ramble through your slide-show distractions. Their addictive power is drfinitely not limited to current and former New Yorkers! Thanks for the introduction.

Thank you, Ronni. What perfect timing! I just got my new widescreen monitor hooked up last night, so I can SEE! Like you, I love to look at house interiors, and have recently substituted my Facebook addiction for one to the Home and Garden TV channel's real estate and home decorating shows. Besides a clear picture, the added bonus is now I don't have to get irritated at all the spoiled, young, whiny people who won't consider anything less than 4 bedrooms, 3 1/2 baths, stainless steel appliances and granite countertops!

Ronni,
I just adore getting to know you through your diverse interests!!!

Thanks for the link to the slideshow about the shop.

Ah, what pleasures. Last time I was in NYC I lost a button off my coat and a friend told me about a store that has every button in the world. I did not go there, but it is strangely comforting to know that such a store exists.
I get the NYT on my Kindle, but I'm going to sneak around the paywall and look at the slide shows through your blog.

I never lived in New York, but I love (crave) it and have friends there. A visit refreshes my soul. The first time I visited, when my daughter was running a youth hostel over a brothel, I slept every other night I was so buzzed. If I could afford it, I'd buy an apt. there--a pied a terre. Sigh. . .

I just spent the morning browsing the slide shows and I can easily see why it could become addictive. I loved the estate in Ireland. It's always fun to see how the 'upper crust' lives.

I'm afraid I would not appreciate a meal in "Per Se". I would be too nervous to enjoy the elaborate presentation of the food. They would spot me for a 'rube' every time and I would be most uncomfortable, if not downright embarrassed.

Hattie...
I'm pretty sure that button shop is called Tender Buttons and it is still there. The website has some terrific photos.

Even if you do not subscribe to the NYT, you (and everyone) are allowed up to 20 pages per month for free. Each slide show is counted as one page no matter how many photos are included in it.

Thanks,Ronni, for telling us about the slide shows at the NYT.

You always suggest the most interesting things to do or see.

I went through two or three slide shows then decided to have dinner at Per Se. After looking at those slides I now know why rich people are so thin.

Did you get a load of the portions they serve?

The gang at Mom's Diner would starve to death.

There’s a Dr. Seuss saying…”Don’t cry because it’s over…Smile because it happened!”

How wonderful to have had the opportunity of living in NYC. I have been a visitor for decades and experience the thrill of just being there every time, even if it is for only a day.

It seems to me that people either love or hate/fear it.

Love this post! Can't wait to check out these links! I watch Househunters on HGTV to check out houses and see what's for sale in the US and other countries, too. Off I go to follow links!

Can't imagine the culture shock you've had after moving from NYC. I'm sure you must miss it terribly.

Thanks, Ronni, for the links and ideas re online slide shows. When the first blizzard hits, I'll enjoy some round the world fun! (We use a roving generator when the power goes out, saving sanity while the wood stove cooks away.)

aged cheese like aged wine is a wonderful thing...so are well aged people!