CONTEMPLATING YOUR OWN DEATH

That drawing by Emily Kasriel, which asks the question, “Should doctors help us contemplate our own death?” is the programme image for today's episode of the BBC World Service show, The Forum on just that topic.

Among the guests is 93-year-old Diana Athill who I know some of you are familiar with from her most recent memoir, Somewhere Towards the End. Here is Ms. Athill in an excerpt from the show (transcript below the audio):

“I never have been, for a very long time. I haven’t been frightened by it. And getting it into your head, that it’s a part of life.

"And now I live surrounded by old people in a house, with I think 40 old people, well I haven’t taken a vote from everybody, but those who I know well, none of them are scared."

Also on the programme are U.S. surgeon Pauline Chen who says,

“I would like to change the way doctors, nurses and other caregivers approach death. When a patient dies, most caregivers, and particularly doctors, tend to scatter, if not in presence, then in mind. My idea is that across the world…there be a mandatory five-minute moment of silence when a patient dies.”

The third guest is poet Paul Muldoon who speaks of his sister's early death:

“She bought a grave, and realised that it wasn’t the right grave…she needed a bigger grave, so she bought a queen size grave as it were or maybe king size. But she also asked me to write something to put on her headstone. And I wrote a little couplet:

“'She stood where you stand, bright eyed, brave, and took the measure of her grave.’”

You can read more about this thoughtful, 45-minute programme here and you can listen to the entire show here. I highly recommend it.

99 PERCENTER CALCULATOR
With all the #occupy news, there is a lot of talk about the 99 percenters. The Wall Street Journal this week posted a calculator that computes where you fall in the income scale of the 99. You can try it here.

10 WEIRDEST THINGS TO DO WITH YOUR ASHES
The one that most caught my attention is this Fredric J. Baur who designed the original Pringles can and in 2008, was laid to rest inside an empty, original-flavor can, per his dying wish.

You can read about the other nine weirdest possibilities for yours or a loved ones ashes – melt them into a diamond, tattoo them on someone's skin, etc.

SIMON'S CAT – CAT AND MOUSE
After posting a Simon's Cat video here last week, I wondered if there are others I've missed since I last checked in with this cartoonist several months ago. Sure enough – and something like this happens almost every day at my house.

STAYING IN SHAPE IN VENICE
Claude of Photoblogging in Paris has been traveling again and she posted this photo from Venice. 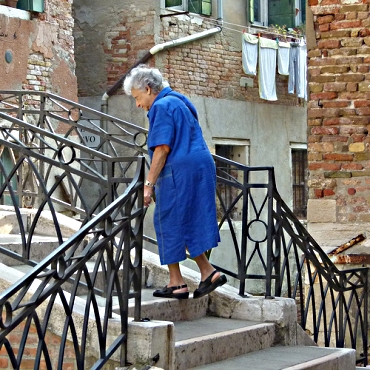 “Once,” writes Claude, “I asked an old lady for directions, (when I say old, old she was, she told me she was 89) and she said she would walk me wherever I was going. So I immediately protested, in my broken Italian, explaining that I did not want her to get tired because of me, and she told me that walking was life.

“As I wondered whether all those steps were not too much for her, she said that living in Venice kept you going, as no matter what you did, you had to cross all those bridges. She told me she went shopping every day.”

You can read more at Claude's blog.

ELDER CARE IN PAPUA, NEW GUINEA
My friend Stan James of wanderingstan sent this clip of a tribal chief from New Guinea visiting London for the first time who is completely befuddled by the western practice of not keeping elder parents at home.

This clip is from a documentary series titled, Return of the Tribe about the trip to London by the chief and five of his subjects. I'm part way through watching the several hours and it's fascinating. You can watch it here.

HIGH-TECH GHOST TOWN
It is being reported that a company named Pegasus Global Holdings will build a town called The Center in New Mexico. It will be large enough to house 35,000 people but will remain entirely empty. According to Engadget:

I lean more toward Occam's Razor for explanations than conspiracy theories, but this announcement about the reasons for an empty town in the middle of a desert seems particularly lame to me and I'm not the only one who is skeptical/suspicious/etc.

WHAT A WONDERFUL WORLD
More charming than what you are expecting. Raymond (no, not Russell) Crowe at the Royal Variety Show - from Darlene Costner.

Ronni, tanks for visiting and linking to m'y blog

The woman on the stairs in Venice reminds me of my mother who lived and died in a tall house with three stories that she climbed up and down every day until she keeled over at age 90. She too thought the stairs and the walking kept her going.

A diverse and interesting collection, Ronni...thank you.

I bet lots of people will say it about their own cat, but mine called Yin is just like Simon's cat on the PC, plus the jumping up and down on me in bed to get me up for her breakfast. Her brother, Yang, simply starts hurling things on the floor from the night stand.

I can understand the Chief's confusion about the way our culture deals with elders. Before Social Security elders were taken care of by family members when they were no longer able to live alone, but it was not always a happy situation. Not all children are kind or appreciative of the fact that their parents once took care of them.

Perhaps there is no elder abuse in the New Guinea in a society where the aged are revered.

My grandmother lived with us after she was widowed and after breaking her hip. My step-father was not kind to her and she ended up living her last years with her younger sister. She deserved so much more and I am so grateful that I am able to be independent.

There are still children in the modern world who welcome their elder parents into their homes and care for them lovingly, but it's nice that there are options.

Simon's cat is always funny and true to life.

Marvelous owl video, thanks. E.g. the Italian woman, my MD tells me walking and doing stairs or going up and down hills, keeps the body healthy(meaning get my fanny outdoors) and that the good condition of your legs and thighs & the ability to get up and down, were very telling as to your likely longevity and good health as an older person. I buy it.

You have really out-done yourself this week! I love all the interesting items and the links to other sites -- I had just about given up on finding new sites that were thought-provoking and/or funny, but you have led me a whole new direction -- and I thank you profusely! I especially love the Guinea chief and intend to watch the entire series with my husband. Thanks again.

I was struck by the quote from Pauline Chen from the BBC forum. An acquaintance chose a similar action upon the death of a beloved aunt. At her passing in the hospital, the nurses asked the assembled family to vacate the room, evidently so they could prepare the body for pickup by the funeral home.

The niece, who had grown up in the care of this scholarly, single lady politely refused. The family stayed around the bed. A nurse's insistence drew a few firm words.

The niece had planned the farewell moments. Instead of leaving, she broke out the wine and poured for the relatives. Those who wished offered words that celebrated a life well lived. I think they sang one of the aunt's favorite hymns and recited a poem she loved. Once they had finished their goodbyes, they quietly filed out.

If I were to choose one of the 10 options for my husband's cremains (currently residing in a cupboard), shooting them into space would make the most sense, as he had been a pilot. The remaining choices are way too creepy.

The modern ghost town sounds creepy, too. I wonder if it will have armed guards to keep out squatters.

Regarding stairs, my mother, age 95, has to climb stairs in order to get to the main floor of her house. The other day she was mopping the bathroom floor with one of those old-style, wring-it-out-by-hand mops. Maybe those are some reasons why she's made it to 95. She's doing all of that in spite of having broken her hip several years ago.

Re: Death - Crestone, Colorado provides outdoor cremation for residents of the area. It is one of the only legal outdoor cremation spots in Colorado and I believe you have to live in Crestone or very nearby to avail yourself of the service. I read about it in the Denver Post a year or two ago and have thought every since then that that's the way I would like it to end - a freed spirit.

Contemplate our own death? I'd never thought of it other than "Oh crap! I'm gonna die!" I like the idea.

Although I understand a family's taking a few minutes (or hours, if they are so inclined) with a loved one's remains, I don't understand why medical staff should join in. Their purpose has been fulfilled and they could better spend their time tending to those whom they can help - unless, that is, the family specifically wishes them to be present. It all depends, I guess.